Rev. Carlsson, who had been a former pastor of the Church of Sweden, dedicated his 350 page manuscript, which was to be a published book,
"To the Augustana Evangelical Lutheran Church with Gratitude and Respect."

​​As a former Värmland Church of Sweden pastor, Olof Olsson, involved in the Swedish Pietistic Movement, was destined to leave Sweden for America with members of his Sunnemo Church congregation to found Lindsborg's Swedish Evangelical Lutheran Bethany Church on August 19, 1869. 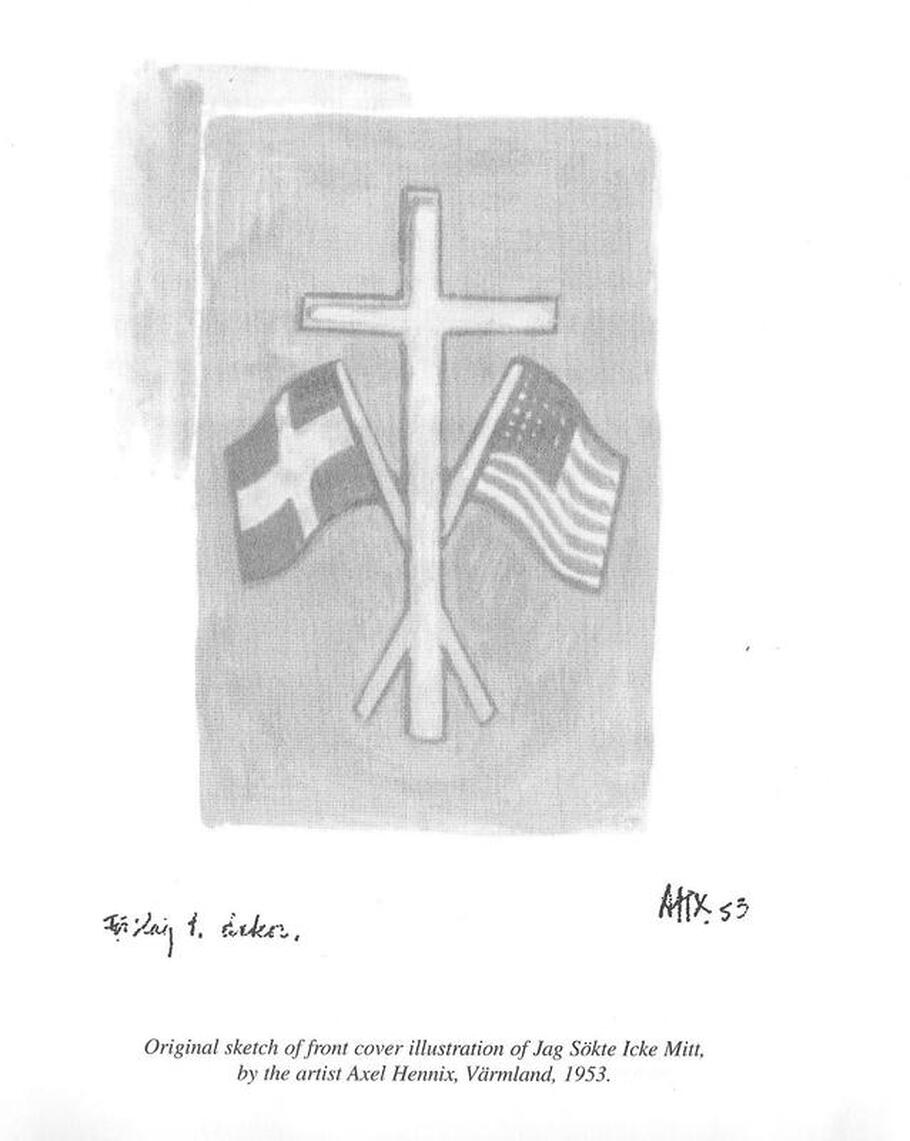 ​Find the Introduction in file below: 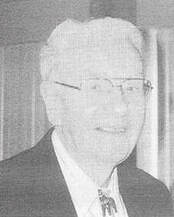 Note: Image added
​     "When Alf Brorson visited Lindsborg in June of 1993, he gave a lecture and showed pictures taken in Sweden and in the United States.  At that time, he told the audience about his father's research on Olof Olsson and showed copies of the book, Jag Sokte Icke Mitt (I Did Not Seek My Own).  Since Brorson speaks excellent English, he was asked whether he would translate the book into English.  He said, "No, but if the book were to be translated, I think it should be done by someone whose native language is English."

"I believe Brorson felt that a person born and raised in America might do a better job with certain expression that cannot be translated literally from one language to another.  I am sure Brorson would have made an excellent translation if he had done it himself, but it has been both a pleasure and challenge for me to assist with this project.

"I must acknowledge the help of several persons.  First, I wish to thank my friend and brother-in-law, Pastor Robert Segerhammar, for putting the translation on his computer.  I also express thanks to his wife, Janice Houk Segerhammar, for proofreading the manuscript with particular attention to grammar and clarity of thought.  I am also grateful for an evening of consultation with friends, Ings-Lill Eliason and Mai-Britt Hawk, natives of Sweden but now long-time residents of America, who were able to Help me understand some Swedish words and expressions that were relevant in Olof Olsson's time but are now obsolete.

"I must express appreciation to my friend, A. John Pearson, who introduced me to Alf and Maud Brorson.  I think he may have anticipated what has happened.

"Finally, I wish to thank Alf Brorson for his friendship and encouragement.  He was able to supply me with historical information which I needed in order to understand clearly the first half of the book. This explains the use of footnotes which were not found in the Swedish version.

"I have received two additional benefits from this project.  I had previous read very little about Olof Olsson or anything written by him.  I feel that I am now better acquainted with him, his life and his thought.  He was truly a humble servant of the Lord who achieved greatly for Jesus and the people of God. 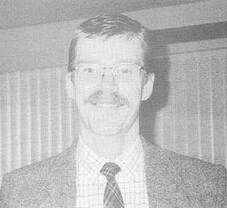 Note: Image added
​     "My father, Bror Carlsson, was a pastor of the Church of Sweden.  At the time of his death he left a manuscript dedicated to "the Augustana Evangelical Lutheran Church with Gradtitude and Respect."  The manuscript entitled I Did Not Seek My Own contains 350 pages of typewritten material and deals with "The Augustana Evangelical Lutheran Church in the U.S. A. during the years 1860-1900 with particular attention to a Värmland native, the pioneer pastor, Olof Olsson."

"He could have been my father." 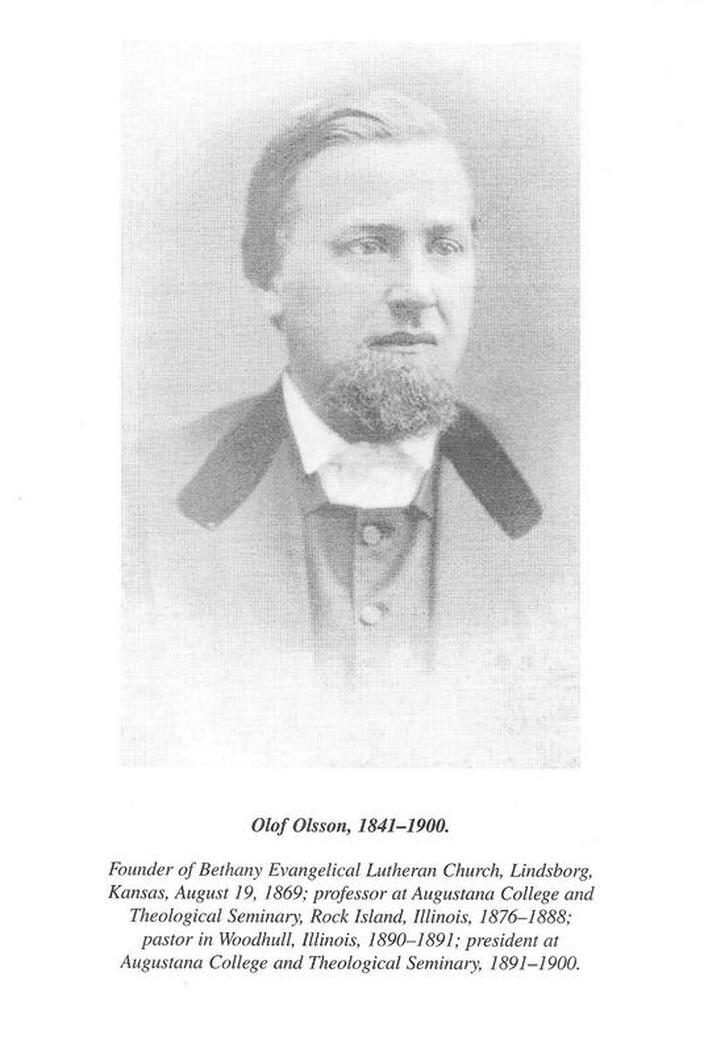 ​Find Chapters 2 and 3 in file below:

"Olof Olsson gave credit to the former kings of Sweden for an important role in the battle for God's word:  "The Swedes must have God's word, otherwise they are lost."

--Lectures and Addresses (The Swedish people's armor for the defence of the Gospel.  Festival address given at Wahoo, Nebraska, February 25, 1893.
​
From page 16:  On the Church of Sweden not accepting his resignation forcing Pastor Olsson to appeal to the King is written:

"By December, 1868, Olof had decided to immigrate to America.

​     "But under the leadership of Bishop Sundberg the Karlstad diocese decided not to accept Olof Olsson's resignation.

"Olof did not give up.  Just as the Apostle Paul appealed to Caesar, so Olof appealed to the King, who on February 19, 1869, granted his request for release from service within the Church of Sweden.  The Karlstad diocese, therefore, was required to release Olof Olsson from his Eksharad's pastorate and did so on March 23 of the same year.

"Olof's emigration was preceded by an exchange of letters to and from America.  In a letter to T.N. Hasselquist, the first president of the Augustana Synod, Olof wrote: "Thank you for the kind letter which I received a long time ago.  The reason I did not answer it sooner is that I was advised and warned on all sides not to journey to America.

"It is not difficult to understand that I became indecisive as a result of these persistent warnings.  I have, nevertheless, decided to come to you in the name of the Lord.  I have recently sent my resignation from service in the diocese to the cathedral chapter."
​
CHAPTER 3
Pages 20-39
THE SONG OF MESSIAH PEARLS FORTH FROM THE PRAIRIE
​
CHAPTER 4
​Pages 40-41
AT THE CROSS

​Find Chapters 3 and 4 in file below:

"In his desire to find meaning in all of life's changes Olof researched in many directions.  There is no doubt that he was, from time to time, regarded with mistrust because of his openness to extensive study and research.

"Olof professed to be "a Lutheran at heart" and his frequent references to Luther's "clear and consistent theological positions" confirms it.  But he also confessed that "anyone who sincerely believes in Jesus as God's Son and the Savior of sinners is my brother and friend in Jesus Christ."  He was always ready to extend the hand of friendship to a brother in the faith.

"Olof was not a typical representative for a single interpretation.  His thinking was not fenced in by "isms."  Throughout his life he constantly sought to deepen his knowledge in relation to the position that "there is only one name and one proclamation and that is Christ."

"But he thought on an idealistic level and consequently his thinking could constantly expose him to attack. . ."

"God's Word was for Olof the highest and most unshakable of all truth.  But he did not look upon Christianity as an exclusive educational system.  He attempted to keep up with the science of his time insorfar as it was possible for him.  'True faith stands in grateful union with true science and true art.'

"When will we be able to pay our debt of gratitude to natural sciences?  The knowledge has grown and had changed our entire physical earthly life in an unbelievable manner.  If many people abuse this knowledge so that they deny and ridicule the hope which makes human life worth living, we do not, therefore, reject the marvelous science, but we feel pity for its abusers."
-- To Rome and Home Again (1890) 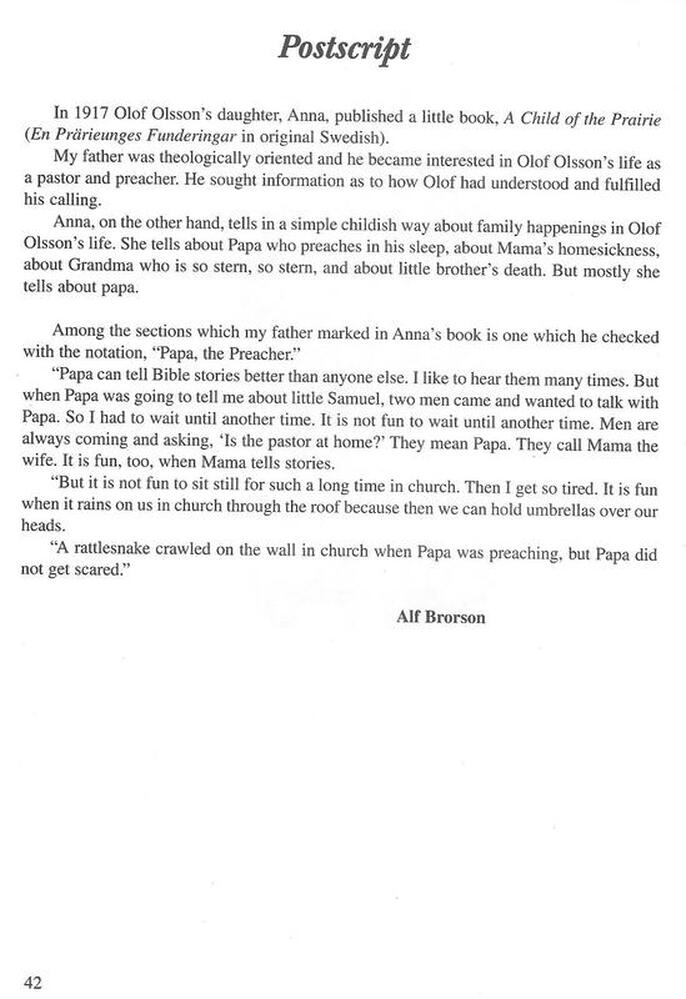 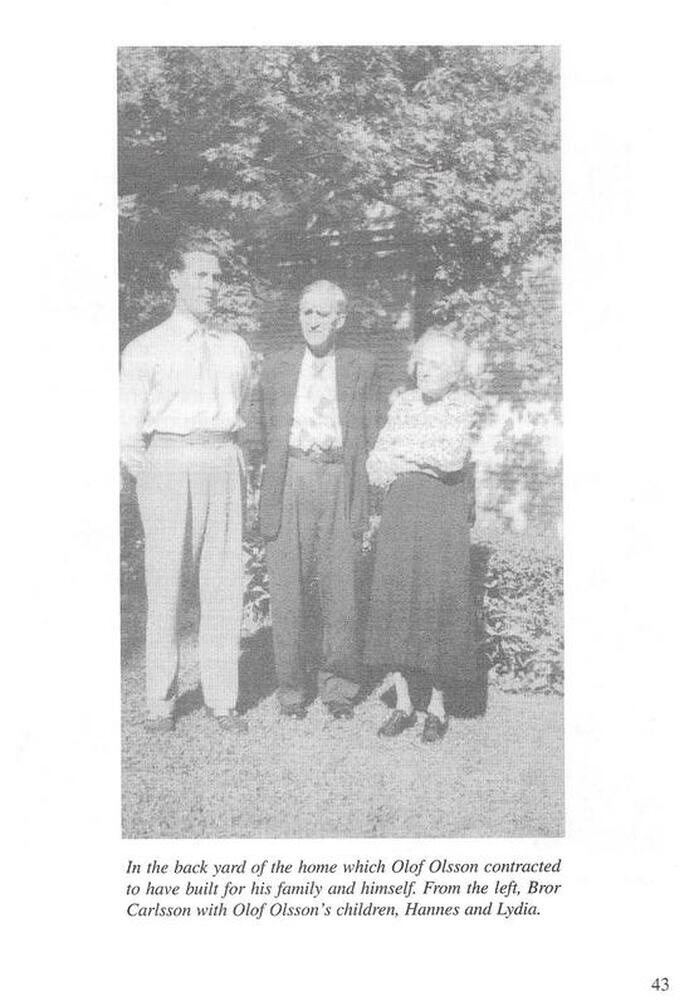 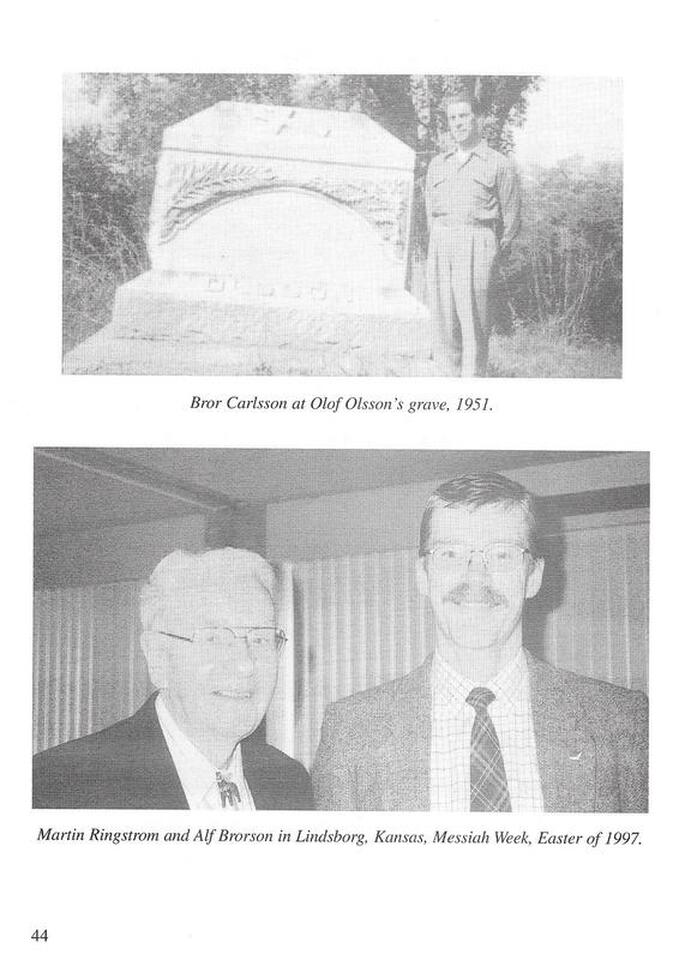 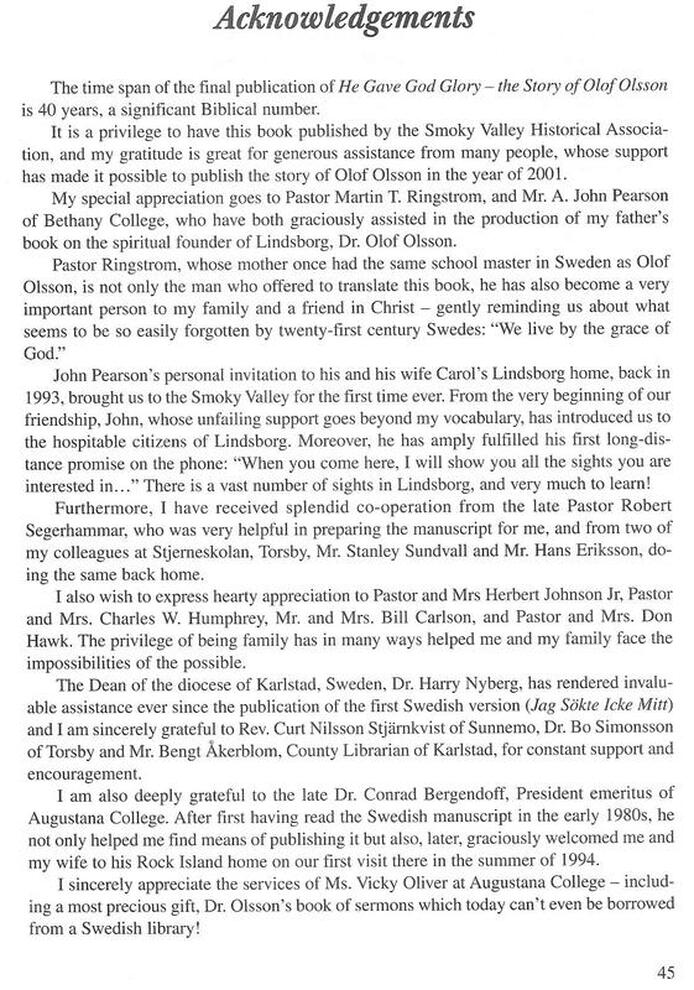 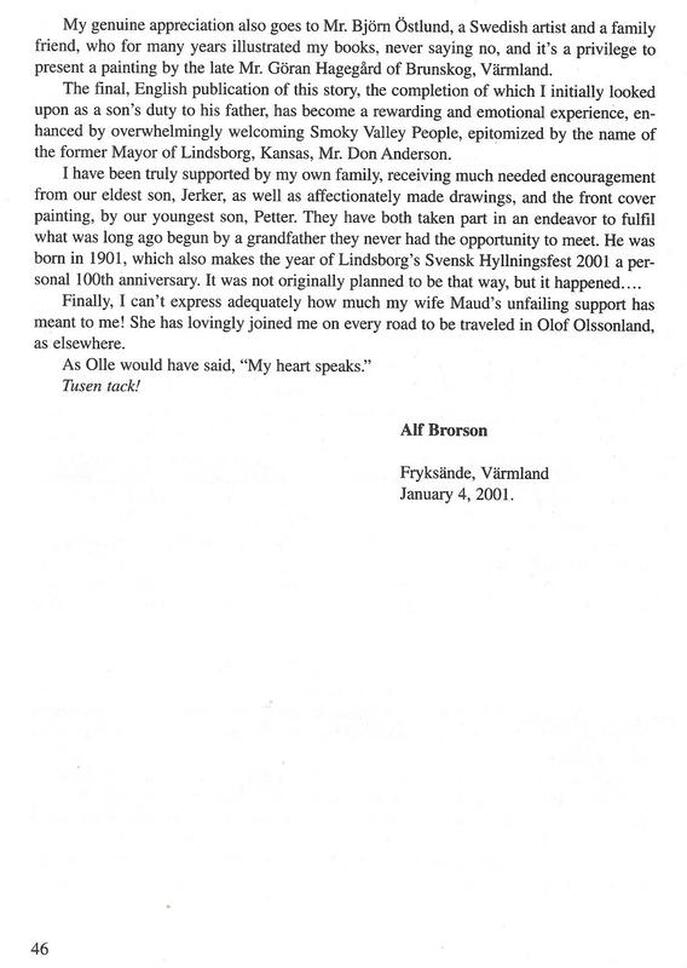 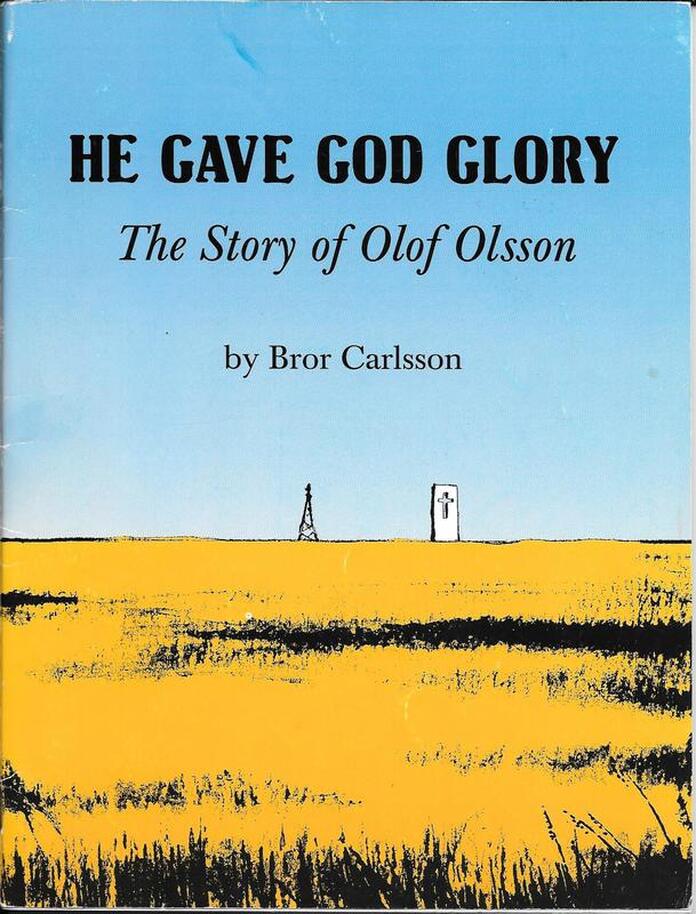