Home
​<>  Remembering the Augustana Synod Legacy  <>
​Their 1860-1962 "Augustana Evangelical Lutheran Synod"
~ Gaining and losing its Swedish identity
The events of the Augustana Evangelical Lutheran Synod were constantly affecting the spiritual and secular lives of Bethany Church members like Lydia, Emil, their families, and friends.  The conferences of the Synod were key to the management of the congregations and in communicating the mission and vision of the Church.

Lindsborg's Bethany Lutheran Church would host six (6) of these Augustana Lutheran Synod Conferences:  In 1875, the year in which the new Church building (which was completed in 1874) would be dedicated with the founding pastor Olof Olsson presiding conducting a large choir for the ceremony; in 1881, the year when Bethany College was founded by second pastor Carl Aaron Swensson who would be presiding; in 1892, the year when the Augustana Women's Missionary Society was founded with Rev. Swensson presiding; and in 1904, 1919 and 1939, when Bethany Lutheran Church and Lindsborg were celebrating their foundings -- in their 35th year, in their 50th year and in their 70th year respectively with Dr. Rev. Alfred Bergin presiding at all three conferences.

​This Synod, first called the Scandinavian Evangelical Lutheran Augustana Synod in North America, was established in 1860 by a group of eleven or so Swedish Lutheran pastors which included Erland Carlsson, Lars Paul Esbjörn, Tuve Hasselquist, Eric Norelius, Olof Christian Telemak Andrén and Jonas Swensson at the Jefferson Prairie Settlement near Clinton, Wisconsin.  For the "riveting" particulars of this synod formation, go HERE to the fine account by Mr. Thomas N. Holmquist.

The Augustana Lutheran Synod was the direct parent to these liberal arts' Lutheran colleges in the United States: the 1860 Augustana College in Rock Island, Illinois; the 1862 Gustavus Adolphus College in St. Peter, Minnesota; the 1881 Bethany College in Lindsborg, Kansas; the 1883 Midland University in Fremont, Nebraska; the 1893-1995 Upsala College in East Orange, New Jersey; and the 1959 California Lutheran University in Thousand Oaks, California.

In 1910, the Augustana Synod, celebrating its fiftieth (50) year anniversary, compiled a book titled "The Augustana Synod 1860 - 1910," and in 1911 it compiled another book titled "Minnen från Jubelfasten" loosely translated "Memories from Jubilee."  (See examples of these books below.)  These were both published by the Augustana Book Concern in Rock Island, Illinois, home to Augustana College and Theological Seminary located on the shores of the Mississippi River and just west of neighboring Moline, Illinois.

​Note that the "Augustana" name was chosen at that first meeting of the Synod.  It is Latin.  It translates to Augsburg, a city in Germany, and birthplace of a most important Lutheran document for the Protestant Reformation, that of the Augsburg Confession!  The Catholic German monk Martin Luther is considered the founder of Lutheranism following his famous posting of the 95 Theses on the Wittenberg Church door on October 31, 1517.  The "Theses" was against the practices of indulgences by the Catholic Church.

To learn more on this most important subject, go HERE to The Augustana Heritage Association, 2000 - 2016. 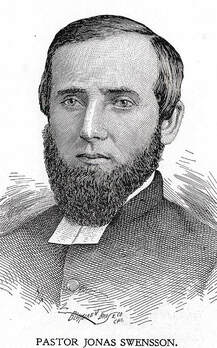 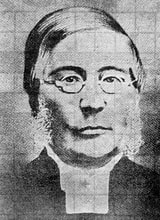 Rev. Lars Paul Esbjörn, Wikipedia England
​[This 1860 year was thus the beginning of what is today Augustana College with its then Augustana Theological Seminary of whom Pastor Esbjörn was first president.  Like, Lindsborg's founder Pastor Olof Olsson of Värmland, Sweden, twenty years earlier Pastor Esbjörn (1808-1870), born in Delsbo from the Swedish province of Hälsingland, was a follower of the same pietistic revival movement in Sweden.  He, thus, became a colony leader of a group of Swedish emigrants to the prairies of Northern Illinois in 1849.  Here, he established a church in the small town of Andover, 20 miles southeast of Rock Island.  That church, named the Jenny Lind Chapel, would become known as the "Mother Church" of the Augustana Lutheran Synod churches.]
- The Jenny Lind Chapel -​ 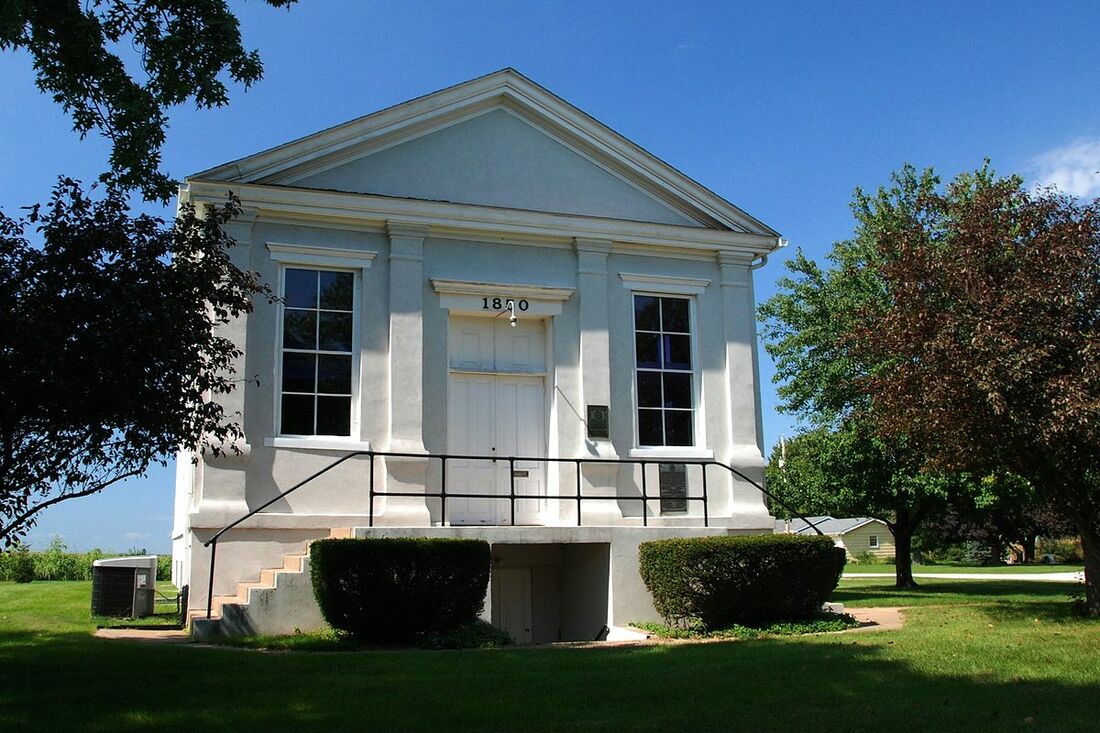 *
In our day and age now, we can actually read The Augustana Synod 1860 - 1910 from our computers and even have it read to us.  Below is the "digital" book for you to review.  It is fascinating to just browse a bit.  Just click on it to begin. 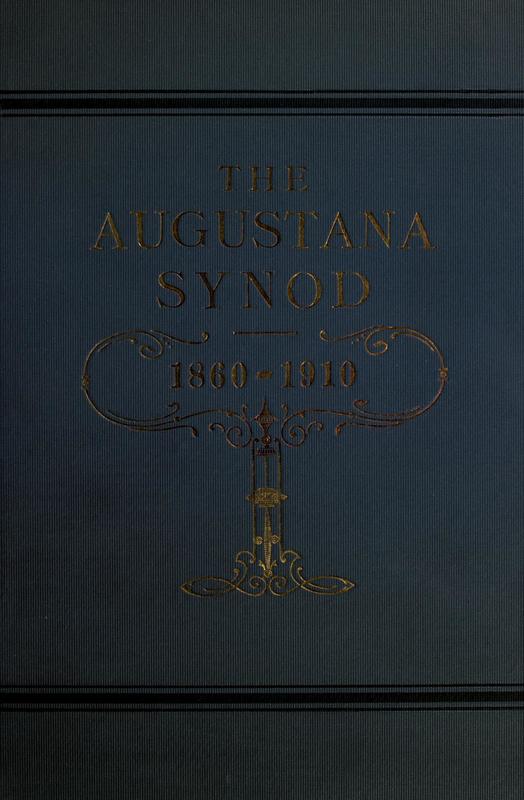 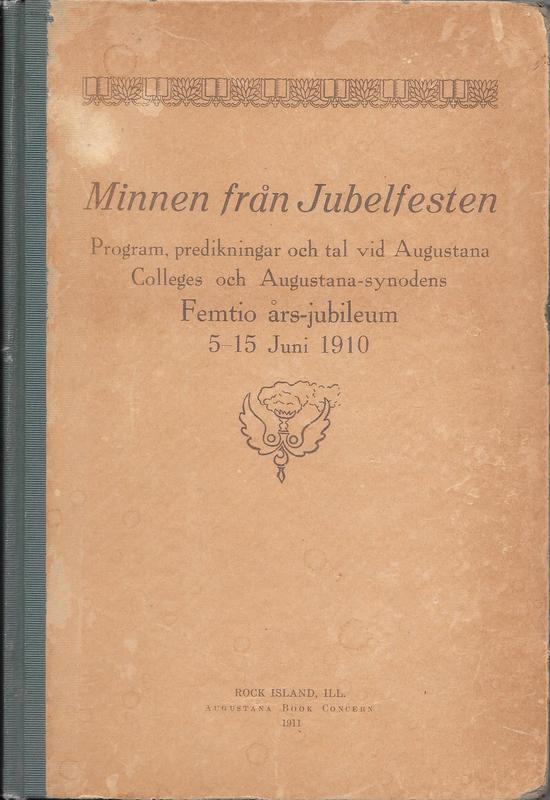 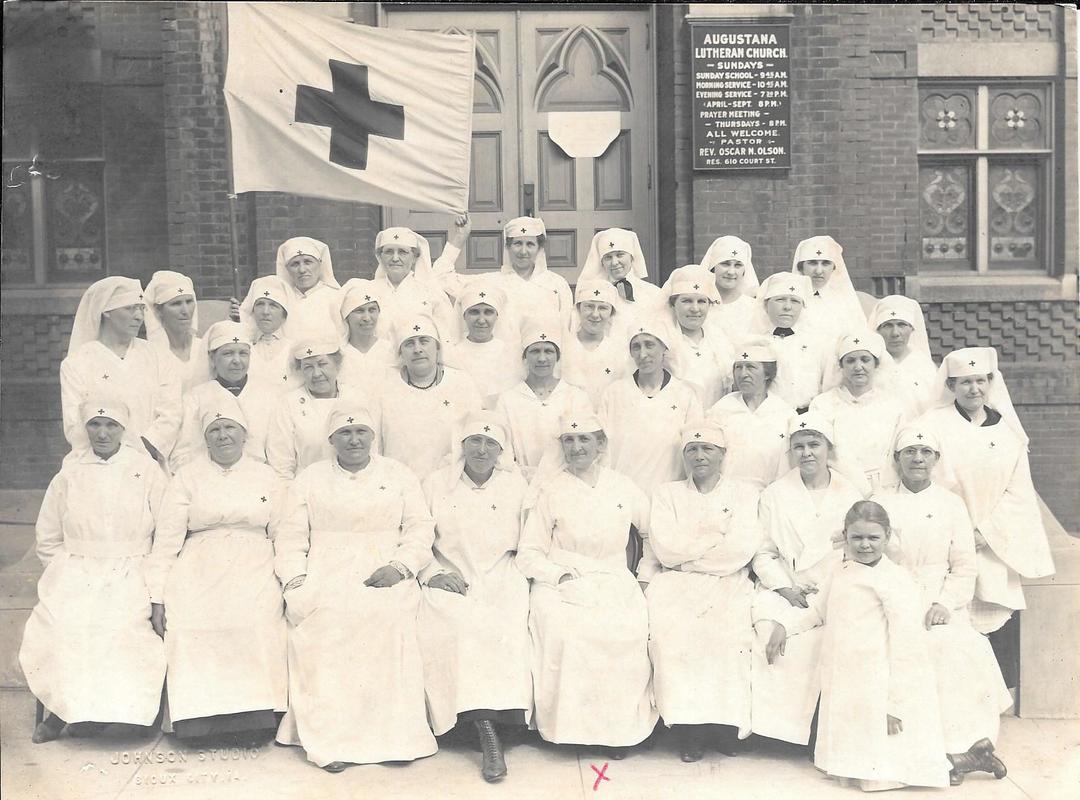 *Source:  Emory Lindquist 1975 book, Bethany in Kansas, the history of a college, page 11
Other sources:  Wikipedia:  Augustana Evangelical Lutheran Church;  Augustana College;  ​Augustana Heritage Association website
​*     *     *
"Let Us Remember Them"
​*     *     *
Swedes: TheWayTheyWere
~ restoring lost local histories ~
reconnecting past to present
*     *     *
All color photography throughout Swedes: The Way They Were is by Fran Cochran unless otherwise indicated.
Copyright © since October 8, 2015 to Current Year
as indicated on main menu sections of
www.swedesthewaytheywere.org.  All rights reserved.