G. N. Malm:  All he did for the Lindsborg community
~ An account by Mrs. Elizabeth Jaderborg 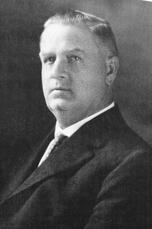 There were 350 articles that Mrs. Elizabeth Jaderborg wrote for the Lindsborg News-Record that found them creating five little books, her "anthology."  Her 1973 "Talk About Lindsborg" is one of them.   This account on G. N. Malm is found on page 17.  It is about a Swedish gentleman blessed with God-given gifts that he used greatly to benefit Bethany College and Lindsborg.
​
Versatile Nat
by
​Elizabeth Jaderborg
"There is an expression, "If you want something done, ask a busy man to do it.  "This could be changed to read, "If something has been done, a busy man did it."

"Gustav Nathaneal Malm was busy, clever and willing.
​
"There was no mistaking the talent "Nat" had, even at a very early age.

"Apparently, it was the same eye for accuracy and simplicity that was evident years later when, it has been said, he could draw a cat in a hundred fewer lines than anyone else. His ability as a caricaturist was uncanny.

"He began his formal studies at the college in Jonkoping, Sweden, his birthplace. Here, at the age of 15, he was awarded a scholarship in art to the Royal Academy of Art.  To his life-long regret, he could not accept. His father, a minister, was called to the "American Field," and he had to go along.

"In 1889, in Omaha, Nebraska, he began to develop as a writer and columnist for a newspaper.

"Politics was hot, and in the newspaper business everyone became involved with the issues at stake.

"G. N. Malm was no exception. In fact, the general opinion seems to be that he went out looking for things to "chew" on. His columns were original and enthusiastic.

"They caught the eye of another writer -- a certain C. A. Swensson in a place called Lindsborg, Kansas.  C. A. Swensson and G. N. Malm became sparring partners of the press, and linguistic sparks began to fly.

"Swensson had an eye for talent. This man belonged in his scheme of things, he decided. So, he got on a train and headed for Omaha. And in 1893, G. N. Malm and his bride arrived, trunk and trousseau, in Lindsborg.

"Dr. Swensson had promised Malm a job, so he set him to work. "Nat" and Carl Lotave, a young Swedish painter, brought to America by Swensson (and who was later to become one of the outstanding painters in the West) were assigned to paint the Bethany College chapel ceiling -- no holds barred.

"Cherubic Florentine figures and shades of the renaissance began to appear. They painted and they painted.  Perhaps under several layers of a tragically unimaginative, long lasting cover-up product, there lay a magnificent masterpiece!

"He also designed the intricate altar in Bethany Lutheran Church in Lindsborg.

"Malm's literary works include books and short stories both in English and in an untranslated Swedish- American dialect which reveals a good natured writer who was very much aware of life around him.

"But he was a serious writer, too.   In this regard, he contributed to newspapers, trade magazines, American Scandinavian Review, Hemlandet, and international commemorative publications. His play, "Haarute," which concerns the oil industry in Kansas, has won much recognition.

"Musically, he helped hold up the tenor section of the Messiah Chorus, and acted as secretary and historian of the Bethany Oratorio Society for many years. Wherever there was a musical activity, there was G. N. Malm.

"Bethany College was his constant concern.  ​But much of the work he did civically was unrelated wittingly taken for granted because his tremendous ability and vigor came so easily."
-------
* These shared selections of the late Mrs. Jaderborg's writings noted by the mentioned book have been shown to her family for approval as of 11-25-22.
​-------
For Mrs. Jaderborg's other account, go HERE for G. N. Malm and his Lindsborg's national interior decorating company.
​​
"Let Us Remember Them"
*   *   *
Swedes: TheWayTheyWere
~ restoring lost local histories ~
reconnecting past to present
*     *     *
All color photography throughout Swedes:  The Way They Were is by Fran Cochran unless otherwise indicated, or obviously concluded it is not.
Copyright © 2021 www.swedesthewaytheywere.org.  All rights reserved.