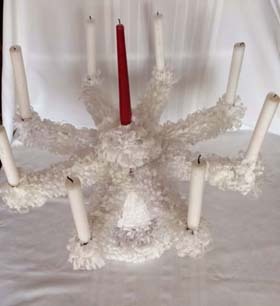 In December, 1869, Pastor Dahlsten began his ministry to both the Freemount and Salemsberg congregations.  They worked out an arrangement where each congregation would have morning services on alternate Sundays.  Salemsberg would have morning services and Freemount would have afternoon services.  The following week the schedule would be reversed.  Pastor Dahlsten would ride his horse to Freemount and conduct worship, then remount his horse and ride back to Salemsberg for the afternoon services. Each Sunday Dahlsten rode nearly 40 miles and he accomplished this remarkable weekly ride every Sunday for three years in all kinds of varied Kansas weather.

The first year in this new settlement, the Swedes were very prosperous.  Dahlsten wrote: "The summer of 1869 we had the most desirable weather, so they who had sown received an almost incredible crop.  That was the greatest achievement for the Kansas Kolonies."  Many more people from Sweden would join them over the next few years, until the land was taken and the countryside was filled with neighbors and friends from the old country.

The arrival of the Christmas season brought a unique joy for the Swedish pioneers in the Smoky Valley.  The prosperous year meant improvements to homes, bountiful supplies of food harvested from the virgin soil and most important, a sense of well being.  God had smiled kindly upon their bold and daring adventure onto the plains.  The community had drawn together in the building of their church at Salemsberg and there was a sense of togetherness and joy in the hearts of the people.  It was traditional for the Swedes to celebrate Christmas with friends and family.  This year, many special and joyful thanks were given to God because their journey was completed and they were finally home.

In the Freemount community the neighbors gathered together at the Feldt dugout.  They did not have a church building yet, but even so they were a congregation.  Christmas morning was the time for Julotta.    The early morning service began at 5:00 a. m. at the cold, dark predawn hour of the day.  Anna Sjogren Carlson, a girl of eleven that winter of 1869 recalled:

'The first Christmas morning was celebrated at the Feldt dugout, one quarter mile east of the Lindquist home, (north of Marquette).  Mr. Lindquist led the singing.  Mr. Feldt read the service from the Postilla (an old Swedish hymn book), GET THIS , and the hymn 'Var Hälsad, Sköna Morgonstund,' (All Hail To Thee O Blessed Morn), was sung.  Those present were the Feldt, Lindquist, Sjogren, Hedberg, Has Hanson, Olaf and Andrew Erickson families.  It was a wonderful service and everyone was happy that they could celebrate their first Christmas together in this country.' 31

Jullota service were also held at Salemsberg Lutheran Church on that first Christmas morning in Kansas.  The dugout church was filled with most of the Swedish pioneers in the community.  They came from miles away, walking, riding in wagons pulled by oxen, or on horseback, bundled against the cold-biting frost of a winter morning.  They were drawn to this place by the desire to worship in the traditional Lutheran manner, with pastor and neighbors, thankful to be finally ending their journey and staking a permanent claim to the new land.

At first there was nothing to penetrate the darkness except the heavy breathing of the straining oxen.  Soon however, a tiny flicker of light came into view, like a beacon to the hopeful families.  As they neared the tiny dugout church the light grew and the paths became swelled with friends wishing "God Jul!" (Merry Christmas).  When they entered the crowded earthen sanctuary, a bright warm glow greeted them.  A  ljuskröna had been placed on the altar and its light filled the hearts of the worshipers with the hope, new life, and joy that always springs eternal with the celebration of the Christ Child's birth.

Pastor Dahlsten led the worship that morning, but no one remembered what hymns were sung or the text of his message.  The one memory the pioneer had was the ljuskröna that lighted the altar that morning.

Ljuskröna, translated into English means" light crown."  These paper-wrapped candelabra were common in Sweden and positioned in a place of honor according to Swedish tradition.  C. J. Brodine built this special ljuskröna, in the days just prior to Christmas, as his gift to the new congregation.  It stood approximately two-feet tall at the base and about four inches in diameter.  Near the top were eight arms extended like the spokes of a wagon wheel.  Each of the arms held a candle-holder, with a long white taper at the end.  The entire piece was wrapped in white paper which gave it a festive appearance.

This piece was not simply a candle-holder on the altar that first cold December morning in Kansas.  To the Swedish people, the ljuskröna was the symbol of the light of Jesus Christ coming into the world.  In the mist of the midwinter snows they found the light, the glory of Jesus Christ, and the hope of the renewal of the life sure to come.  This beacon of light led them to the end of their journey.  After years of tribulation and many difficulties, they had found a home.

As the last echoes of the final hymn reached the crest of the hills that surrounded them, they looked at each other through the glow of the light.  They saw deeply-lined, tired faces, and eyes that had seen too much suffering.  But they also saw great strength, wisdom, and the faith that would see them through.  Each one had carried the cross of the pioneer, and they new that here they could plant their roots, raise their children, and worship in their own way.  They had reached the top of the peaceful mountain.

​Note 32.  The Salemsborg ljuskrona is one of the very few relics that still exist from the early pioneer days of the Swedes at Salemsborg.  The original has been preserved and is in the possession of the Danielson family.  An exact duplicated was made by Mark Esping of the Folklife Institute of Centraol Kansas, in Lindsborg, Kansas.  The replica is in the prossession of the Holmquist family and is still used as a part of the Salemsborg Christmas celebations.