“There is hope that from....Chicago artists will come a painter of the sea—the actual sea—....that shall command the respect of the world..."
-- 1905 Fine Arts Journal
Lydia's and Sandzén's Swedish Artist Friend
Charles Edward Hallberg
(1855-1940)

Charles Hallberg's first painting to be shown at the Chicago Art Institute was the Open Sea which hung in a room with the old masters in February of 1901.  With this exhibition and the others which followed, he became well known exclusively for his "marines."

It was predicted in the 1905 April issue of the Chicago based Fine Arts Journal that, “There is hope that from the ranks of Chicago artists will come a painter of the sea—the actual sea—in its profoundest suggestion of depth and mightiness that shall command the respect of the world of art at large.”*

At the 1906 Chicago Art Institute exhibition where Hallberg had a one-man show, there were forty-one (41) marine paintings of his to view.  It was reported that,  "The variety of canvases was unusual, showing coloring and light effects under the varying aspects of the day, the clime and the seasons. . . . In no instance may a picture be said to reflect the style of another man."*
- HALLBERG I -
One of the Great Lakes
1909
Gifted to the Sandzén Memorial Art Gallery, 2019, in time for the "Art for All - The Swedish Experience in Mid-America" 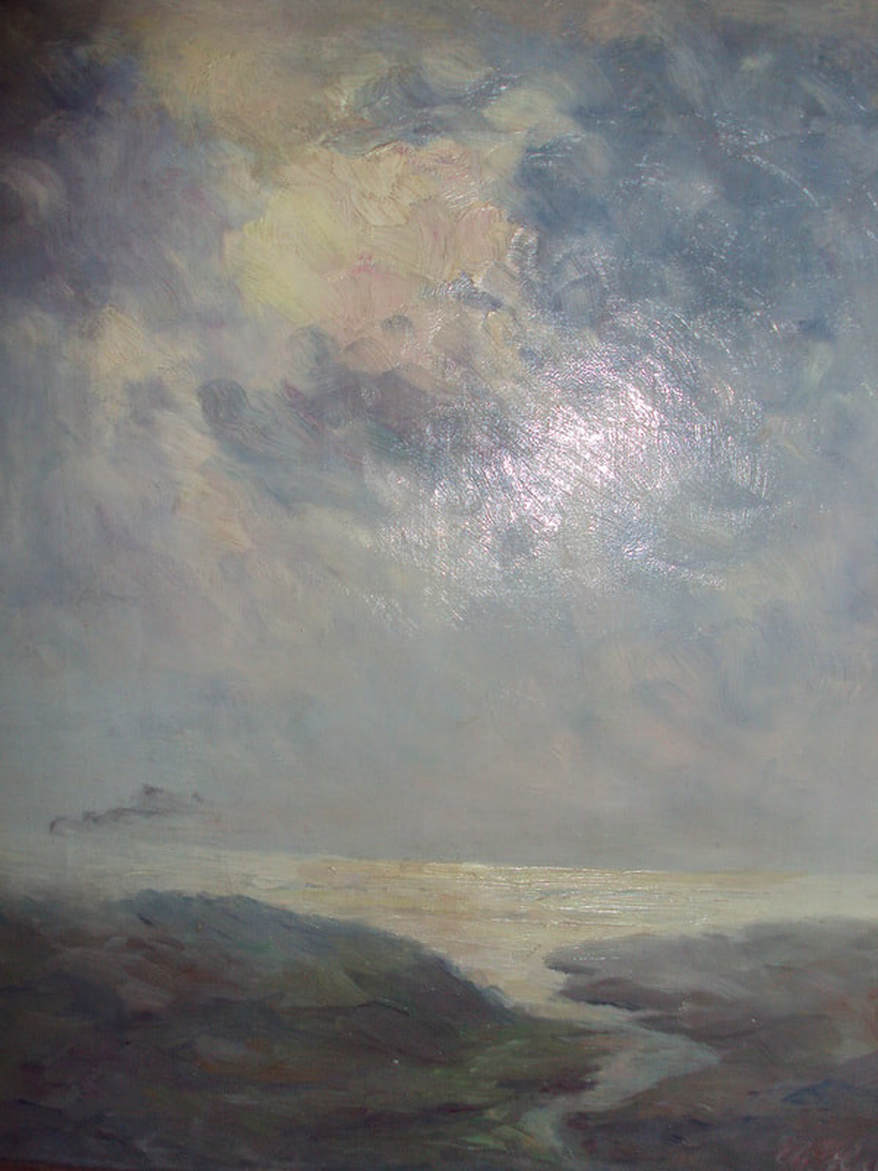 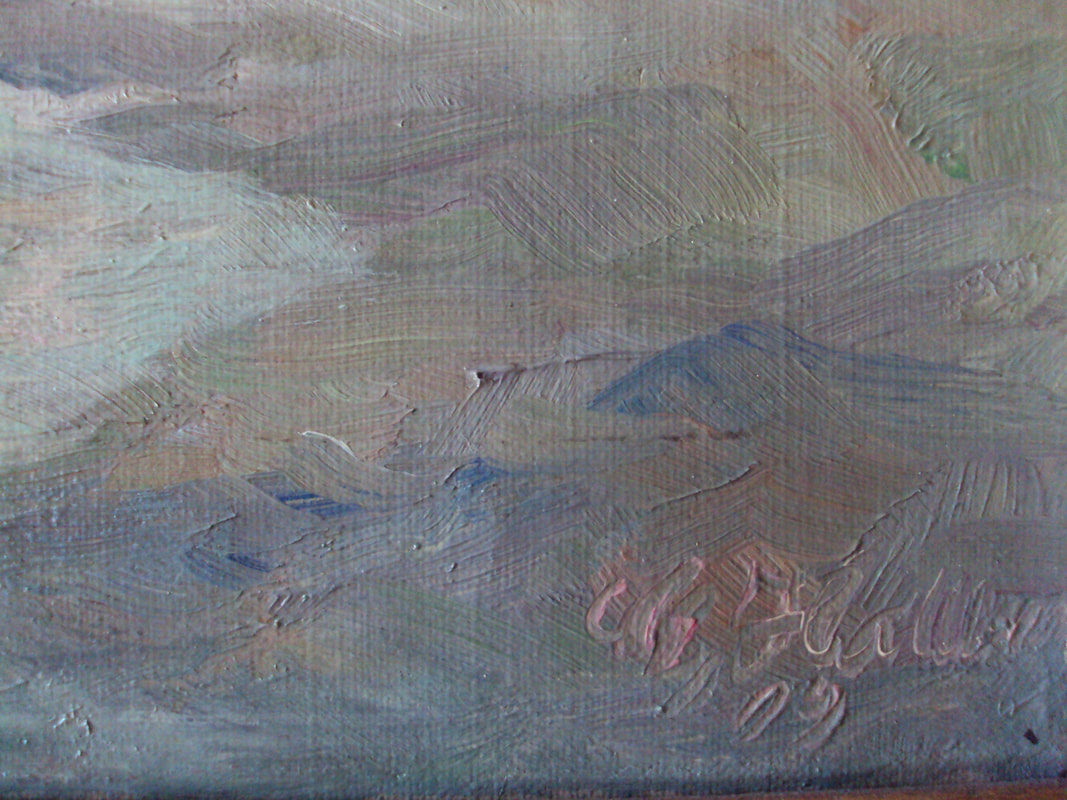 - HALLBERG II -
One of the Great Lakes
c1908
Gifted to the Sandzén Memorial Art Gallery, 2019, in time for the "Art for All - The Swedish Experience in Mid-America" 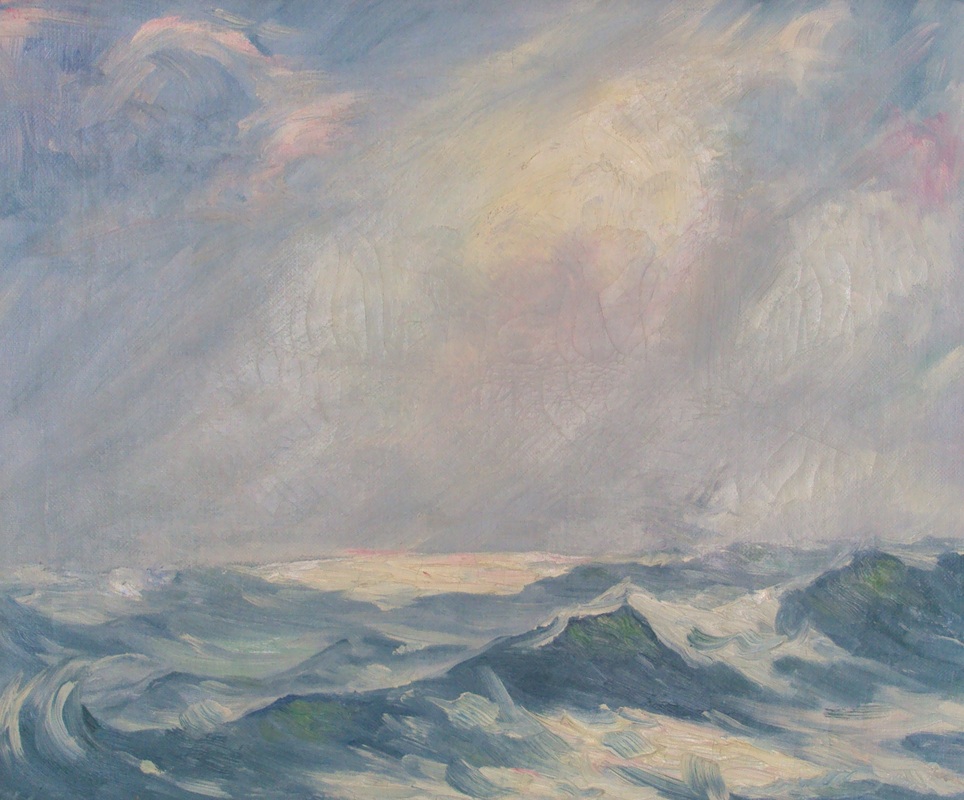 - OIL ON CANVAS -
Born in Göteborg, Sweden, on January 15, 1855, Hallberg would become a self-taught artist.  His introduction to art was as a twelve-year-old when he saw several watercolor paintings in the home of a playmate and copied them using crayons.  This is where his passion for sketching and painting began.

He was very young when his father abandon his family.  Due to this life altering event, Hallberg would have little time for school, and would instead find work to support himself, his mother and sister.  At 17, he was hired to work on board a British brig.  This was the beginning of a career which found him serving as a seaman under various flags for the next decade.

In 1883, he arrived in America, in Chicago, and from there, he sailed through out the Great Lakes for the next seven (7) years, making many sketches of the inland seas while a sailor.    In 1885, he married Amanda Josefine Olson of Göteborg on January 21.  They began their family in 1887 with Ellen Hermina, followed by Sylvia Helena in 1890, and Austin Benjamin in 1892.  They were members of the Swedish Lutheran Church.

In 1890, he left his job as a sailor and became a janitor in an apartment building on LaSalle Street.  Eighteen months later, he accepted a janitorial job at the Austin State Bank and at the next door apartment building.  There at the bank, Hallberg practiced his art in a small room in the basement when he was not working.  Yet, when he began showing his work, it was Birger Sandzén's former art instructor, the renown Swedish artist Anders Zorn, the official Swedish commissioner of art for the Chicago ﻿﻿﻿1893 World’s Columbian Exposition﻿﻿﻿ who encouraged Hallberg to leave the janitor job and to make his living as a painter.
From the 1901 show of his Open Sea at the Chicago Art Institute, his career as a marine painter took off.   In all, Hallberg was to show sixty-three  (63) works at the Institute between 1902 and 1927, in addition to the forty-one (41) paintings exhibited at the Institute in the one-man show in 1906.  In short, between the Chicago Art Institute and the Chicago Swedish Club, he would exhibit his paintings 33 times from 1902 to 1927.

In 1904, during the St. Louis World's Fair (Louisiana Purchase Exposition), his Summer Day on Lake Michigan was accepted by the national art jury. He was one of two Swedish Americans out of nineteen (19) Chicago artists to have this great honor.   Their works hung in the magnificent general art hall, Festival Hall, of the World's Fair.

Hallberg most likely met Birger Sandzén in Chicago when they were showing their works at the Chicago Art Institute and at the Chicago Swedish Club.   Chicago could also be the place where Lydia met Hallberg too since she first started studying art there in the summers at the University of Chicago somewhere between the years of 1907 and 1913.

How Lydia came by the Hallberg paintings is pure speculation.  Did Hallberg give Lydia the paintings, or did he give them to Sandzén, and, then, Sandzén gave them to Lydia, are the questions.

I have yet to discover a large art gallery on Hallberg here in America.  In his life, he was a celebrated Swedish artist in Chicago and Sweden where some of his works were hung, a few of which are in his Swedish home town of  Göteborg at the Gothenburg Museum of Art.   The majority of his work may be with his descendants, with the descendants of those members of the former Chicago Swedish Club, and at the Chicago Art Institute.  (When time allows, contacting the Institute to learn more as to where Hallberg's works are is my plan.)

When visiting the Swedish American Museum in Chicago in 2010, they also had two beautiful Hallbergs which they took out of storage to let me see.

With most of Hallberg's marines, it is always fun to "search" for "the sea vessel" in the paintings, most of which are there, but very difficult to find at "first glance."
Can you find the sea vessel in each of these paintings?
Both of these Hallberg paintings arrived in San Francisco with the Sohlberg Deere Estate in 1984.  Twenty years later each painting received the needed conservation work so duly deserved along with the Swedish Oscar Brousse Jacobson painting.
- Charles Hallberg -
(1855-1940) 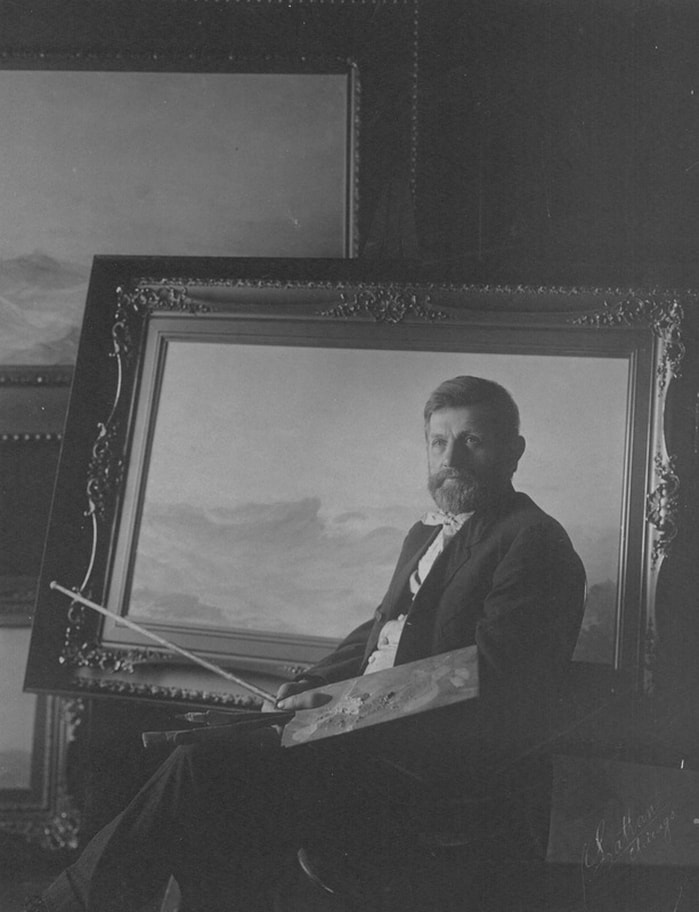