Artist Lydia Sohlberg Deere
​Swedish American Presidential Candidate Honorable John A. Johnson Governor of Minnesota with Supporters at Sohlberg House, Easter 1908
Lydia's Lindsborg Photography, 1900 - 1925
Lydia's World Through Her Camera Lens
​
This photograph is probably the most historical and important one that Lydia took out of all her photographs--important to Lindsborg and to Bethany College--of Lydia's and Emil's friends, of "the other Swedes" who were gathered at her parents’ home, Sohlberg House, in 1908, during Holy Easter Week, to show and document their support of the tall imposing Swedish American presidential candidate Minnesota Governor John A. Johnson who is shown front and center.

So far identified is the equally imposing celebrated Bethany Lutheran Church Dr. Rev. Alfred Bergin on the right.  Within the gathering are Bethany College President Ernst Pihlblad and his brother Arvin Pihlblad MD, art professor Birger Sandzén and his father-in-law, Eric Leksell,  behind the gathering wearing a hat.  (A slightly different composition of the photograph appears at the top of page 133 from 1965 Pioneer Swedish-American Culture in Central Kansas by Ruth Billdt, daughter of Dr. Rev. Alfred Bergin.)
- Swedish American Presidential Candidate and Supporters at Sohlberg House -
Easter 1908 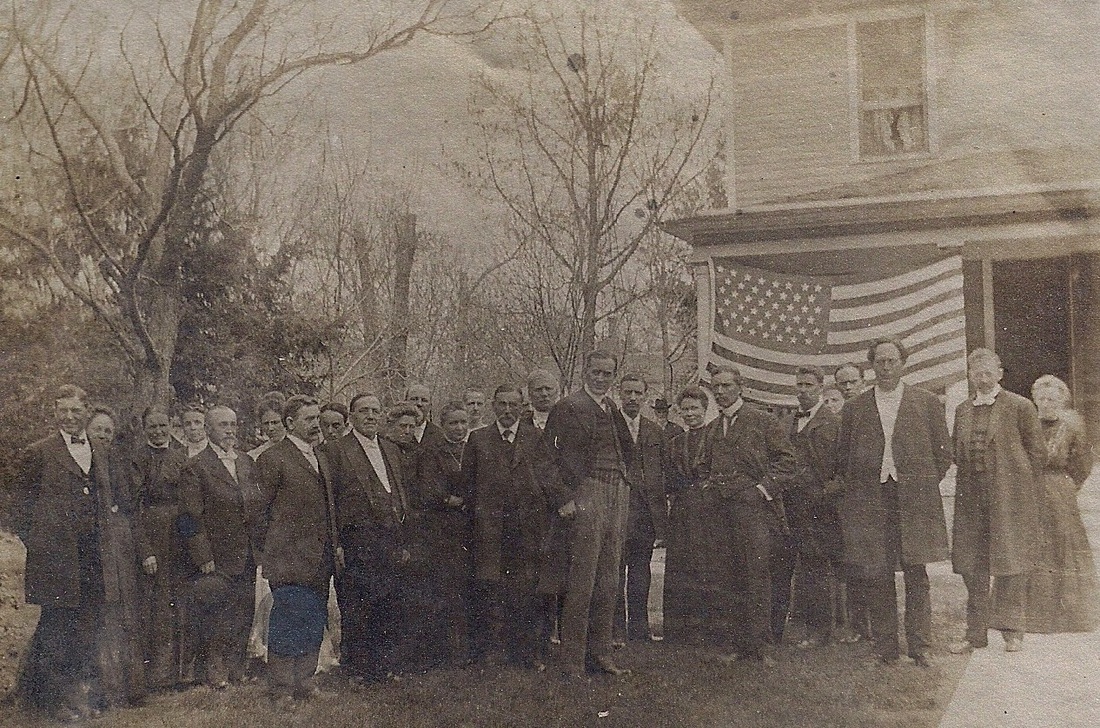 With Lydia's first job in the millinery business in Lindsborg in 1900 came her new interest in photography and the purchased of a Kodak camera.*  Her subjects would be family members; friends; and college faculty, students, and employees.  Lindsborg, Bethany College and the Smoky Valley Bluffs (Coronado Heights) would provide various venues for Lydia's artistic compositions, most of which were fun filled, a few with "some" risk-taking.

With her interest in photography, more than anything, Lydia gives us a sense of the times, the way they were.  Today, Lydia's Lindsborg photography is historic as the taking of these photographs  began over 100 years ago, starting nineteen (19) years after the founding of Bethany College.

Lydia's  first group of photographs were of the hats from her shop being modeled by  my grandmother, her niece, Nina Sohlberg (Fry), and her girlfriends.  Nina would be Lydia's main model in many of her Swedish Lindsborg photographs.

In 1906, Lydia started a new job at Bethany College as Dean of Women and Matron of the Ladies Dormitory, Lane Hart Hall.  This would start a new group of photographs, the Swedish Bethany College photographs, found under the Scientist Emil O. Deere main section beginning with Deere's & Lydia's Bethany -- Lydia's Photography, 1906 - 1925. From 1906 these two Swedish series of photographs would grow concurrently until around 1925.

Why do I refer to these series as Swedish?  When Lydia began taking photographs, Swedish was still spoken everyday in Lindsborg and at Bethany College and the local newspapers were in Swedish as well.  Like all immigrants in America, the Swedes in Lindsborg would not quickly give up their language and traditions.  For in all America, the Americanization of the immigrant would occur gradually.

Covering Lydia's Lindsborg Photography during the period from 1900 to 1925 are these succeeding sections:  1) The Hats, 2)The Smoky River, 3) The Smoky Hill Bluffs, 4) Coronado Heights, One Winter's Day, 5) In and Around Lindsborg, and 6) Sohlberg House with Parents.
-  Nina Sohlberg, Lydia's Main Model, at Sohlberg House -
- note Lydia's shadow - 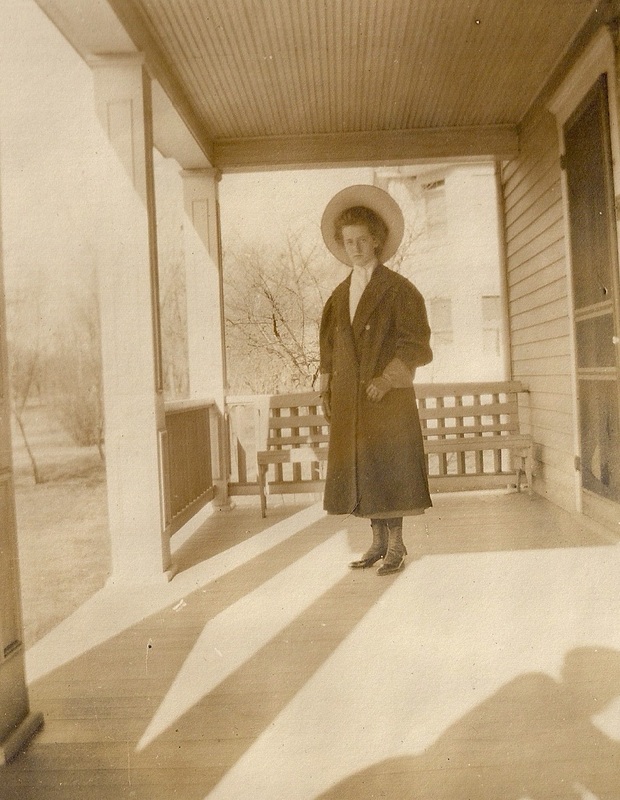 Now to Lydia's Lindsborg Photography starting HERE with The Hats! 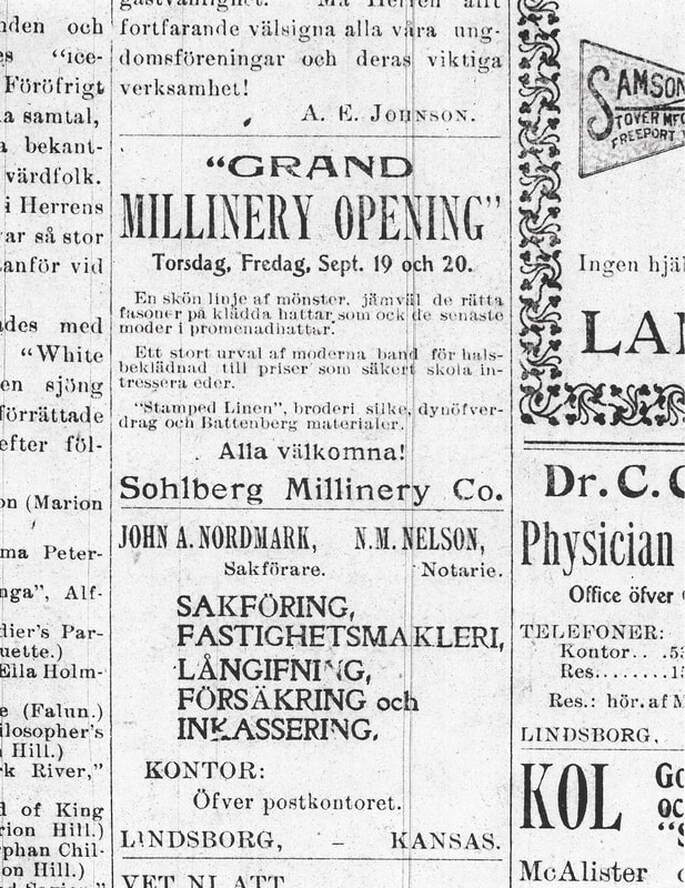 * The first Eastman Kodak camera came out in 1888 to be used by amateur photographers.
*     *     *
Swedes: TheWayTheyWere
~ restoring lost local histories ~
reconnecting past to present
*     *     *
All color photography throughout Swedes: The Way They Were is by Fran Cochran unless otherwise indicated.
Copyright © since October 8, 2015 to Current Year
as indicated on main menu sections of
www.swedesthewaytheywere.org.  All rights reserved.