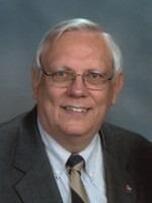 ​A Swede, Mr. A. John Pearson was born in 1936 in Illinois whose family worshipped in Lutheran churches belonging to the 1860 Swedish Augustana Lutheran Synod.  He attended Bethany College, a college of the Synod, for his freshman year of 1955 and transferred to a sister Lutheran college, Gustavus Adolphus College, in St. Peter, Minnesota from where he received his Bachelor of Arts Degree in 1959.  Graduate studies found him at Boston University where he received a Master's Degree in Public Relations in 1962.  His Master's Thesis was on "University Presses." ​

He and his wife Carol, of Swedish descent, arrived in Lindsborg in 1970, with their two children, Clay and Jay, whose sister Candance was born in Lindsborg.   As a family, they would join Bethany Lutheran Church, a church of the Swedish Augustana Lutheran Synod.  Mr. Pearson was hired at Bethany College to first work as the Director of Public Relations and Alumni Affairs in that year, under the Dr. Arvin W. Hahn presidency during a very challenging and, yet, a very rewarding era in college history.  He continued in that position until 1992 when he became the Director of the Archives and Heritage Center and of Sports Information until 2004 when he retired. Yet, in retirement, he continued on at the Bethany Archives as its Volunteer Director until 2006.

Carol was a graduate of Illinois College and continued with part-time studies at Bethany with the class of 1976.  In time she was to serve as Bethany College Director of Summer Programs and Special Events and would become a member of the Bethany Auxiliary, serving as past president, past treasurer, and member of the cookbook committee.  She would also become the advertising manager of the Lindsborg News Record for a period of time.  In later years she would hold the treasurer's position at the the American-Scandinavian Association of the Great Plains, ASA-GP, co-founded by her husband.

Mr. Pearson's commitment to sports at Bethany from the very beginning of his career there would at the end of his career result in many honors as reported in the Fall 2013 Bethany Magazine found on page 21, stating his receiving the Bethany Athletic Association (BBA) Award of Merit.  This is an award that recognizes active members in the Association who have demonstrated outstanding "service to youth or their careers."  It was also stated that he was the Kansas Intercollegiate Athletic Association (KCAC) statistician for four years and that he had been inducted into the Bethany Athletic Hall of Honor in 2004 and received the 2007 Clarence "Ike" Pearson Award from the National Association of Intercollegiate Athletics (NAIA) Sports Information Directors Association.  Continuing, in 2011, he was honored by receiving the Lifetime Achievement Award from the College Sports Information Directors Association.

Not as well known and rewarded was his love for the local Swedish and Swedish American history and the promoting of those connections to Sweden.  ​It seems that Mr. Pearson upon his Lindsborg arrival soon became a sponge for absorbing Lindsborg's and Bethany College's Swedish history, culture, and traditions.  For his career, and into retirement, he has shared his many God-given gifts with these Smoky Valley people.  In his public relations job, he and Mrs. Pearson were to become behind-the-scenes goodwill ambassadors to a myriad of visitors from Sweden and Swedish America, from dignitaries and officials from Sweden and stateside, especially during historical events.  These gatherings provided opportunities for strengthening cultural Lindsborg and Bethany College's ties to Sweden as did his position as the Vice President of Communications for the American-Scandinavian Association of the Great Plains, ASA-GP, an organization of which he cofounded, the year after his arrival, in 1971.

Mr. Pearson's writing skills were put to work at Bethany College and in Lindsborg in other behind-the-scenes projects which produced a myriad of local articles specializing in highlighting the Swedish historical and cultural events and traditions from the earliest time which were published in the Lindsborg News-Record, and at the college in the seasonal Bethany College Magazine, of which he was the editor for some time in the 1970s which included that 1976 Spring Issue that covered the 1976 entire visit of the King of Sweden to Lindsborg and Bethany.  These various articles he would continue to write, for certain community events and occasions and needs, now for over 50 years as I witnessed in 2022 with the updating of the Bethany College website in regards to her history.

- TELLING THE STORY OF "THE WAY THEY WERE" -
​Two fine pieces of his writing, that were published, are shared in the next two sections. Go HERE for the 1881 "Bethany College Centennial" history where he chronicles the "first" eight Bethany College presidents describing their presidency, and ﻿HERE﻿ for the "Messiah Centennial" history, which gives a great history from the time it started in 1882.  These selections are where you will find the most important foundational Bethany College history, concise, well-researched and accurate, well-written and very interesting with wonderful college archival photograph images, truly telling the story of "the way they were!"
​
Even as important as his writing and editorial gifts as a Smoky Valley writer are, his gift to publish the Smoky Valley writers books through one of two of his publishing companies were and are most important to the community.  His first published work of which he was the editor was to be Dr. Emory K. Lindquist's classic Bethany in Kansas, the history of a college.  He published this in 1975 under his founded Bethany College Press, with six more published books to follow.  In 1984 under his Smoky Valley Historical Publications, he first published God's People in a New Land: Memorial Volume of Manuscript by Johan Augustin Pihl, A Swedish Immigrant.  Here, as well, 6 more books were published under this company.

The Authors and Their Books

1975   Emory Lindquist
Bethany in Kansas: The history of a college
A. John Pearson, editor
Hardbound

1999   Emmet E. Eklund and Marion Lorimer Eklund
The Difference He Made: A Biography of Emory K. Lindquist
Hardbound

2003   Ylva Eggehorn
"Manual for the Art of Loving Trees: Poems by Ylva Eggehorn
published with a second section
“The Academy of Joy: Pages from the Novel, One of These Hours”  Paperback

The Authors and Their Books

1993  Robert E. Segerhammar. Illustrated by Norman Malm.
Swedish Mecca of the Plains: A Novel About Lindsborg, Kansas, and
the Smoky Valley in the Middle Years, 1904-1928
Hardbound

2001   Bror Carlsson
He Gave God Glory: The Story of Olof Olsson
Alf Brorson, revisionist and editor
Paperback
- Honored and Remembered -
*     *     *
​​- A. John Pearson -
In Summary
At some point in Mr. Pearson's Bethany College career, he became the gentleman new Bethany College administration and faculty would go to for historical questions and accurate answers on the College, just as did those of Bethany's past go to Dr. Emil O. Deere, a last-living-link to the beginnings of the College.

To this year of 2022, the College continues to ask those same kind of historical questions of Mr. A. John Pearson.

For generations to come, Mr. Pearson's writings will become indispensable to the education, preservation, and promotion of Swedish Lindsborg and Bethany College history and cultural heritage.