Swedish Immigration Story, 1854
- The Swedish Sohlberg Royal Gold Thread Embroidery Sampler -
(c1890s)
My great great grandparents Ulric and Antoinette Sohlberg's three daughters, Alma, Nina and Emma, made their livings as seamstresses and embroiderers.  For part of their lives as embroiderers (so the family story is told), they would take their "samplers" of gold thread embroidery to the Royal Palace in Stockholm and elsewhere for commission work with the Swedish government.  These three sisters did not marry.
- Nina Ulrika Sohlberg's Swedish Sampler - 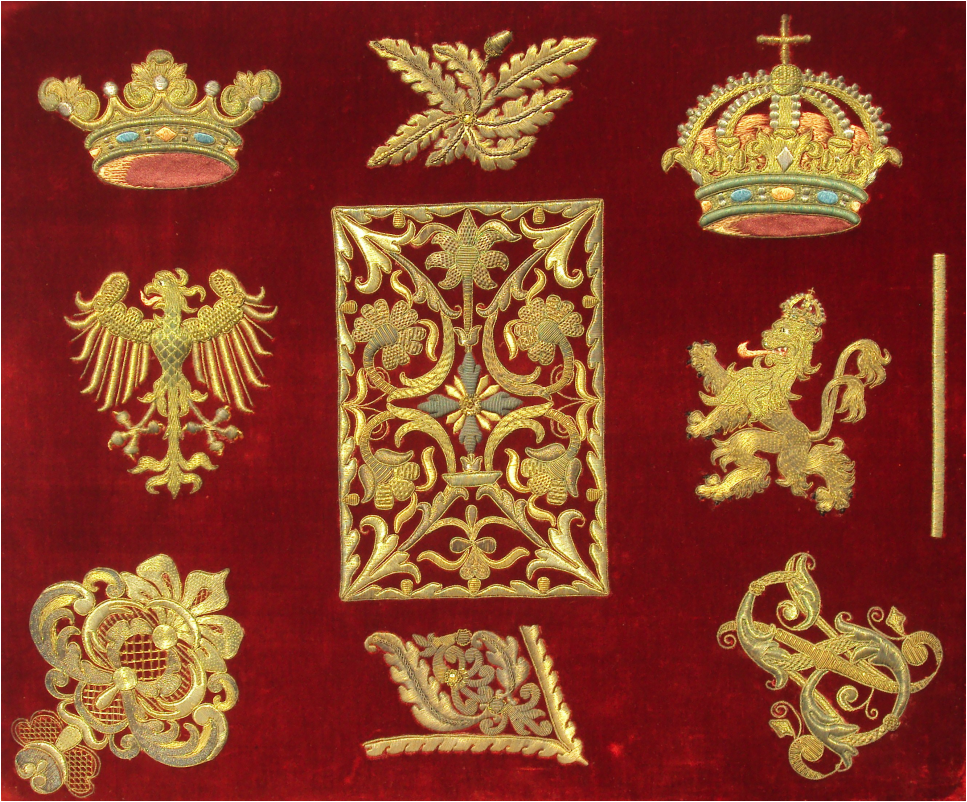 This particular sampler belonged to Nina Sohlberg and she initialed it with an embroidered S overlaying and intwined with an N found in the lower right hand corner of this piece.
- The Initials of Nina Sohlberg - 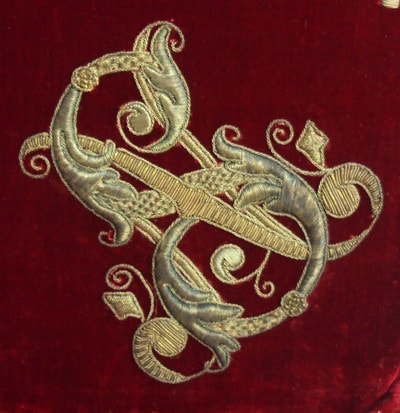 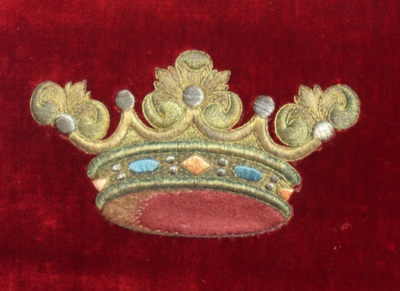 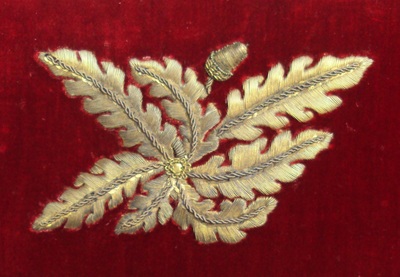 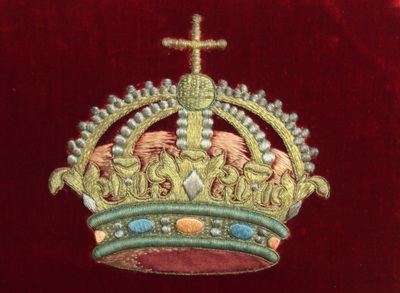 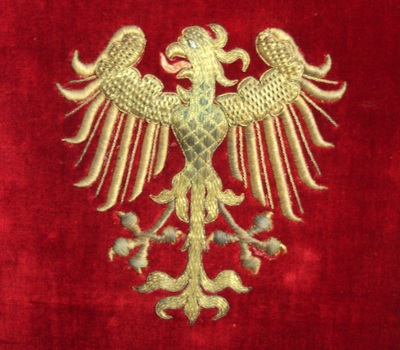 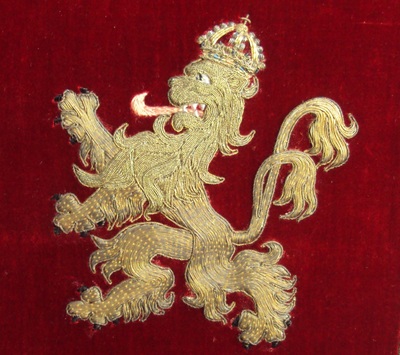 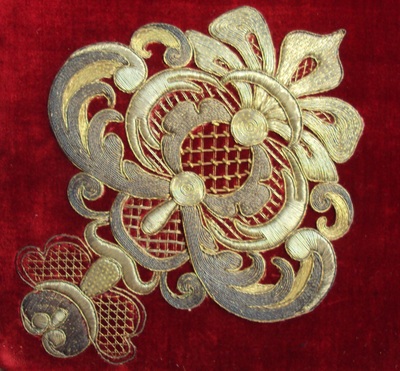 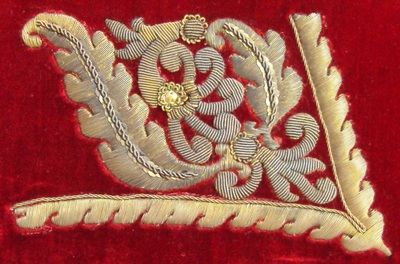 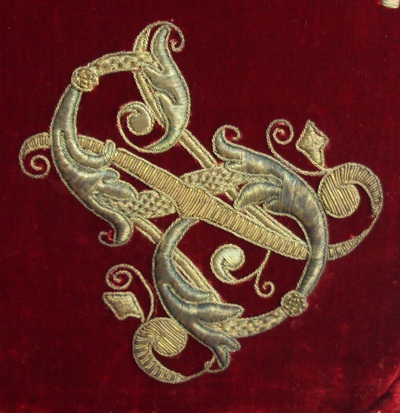 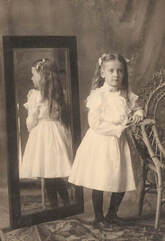 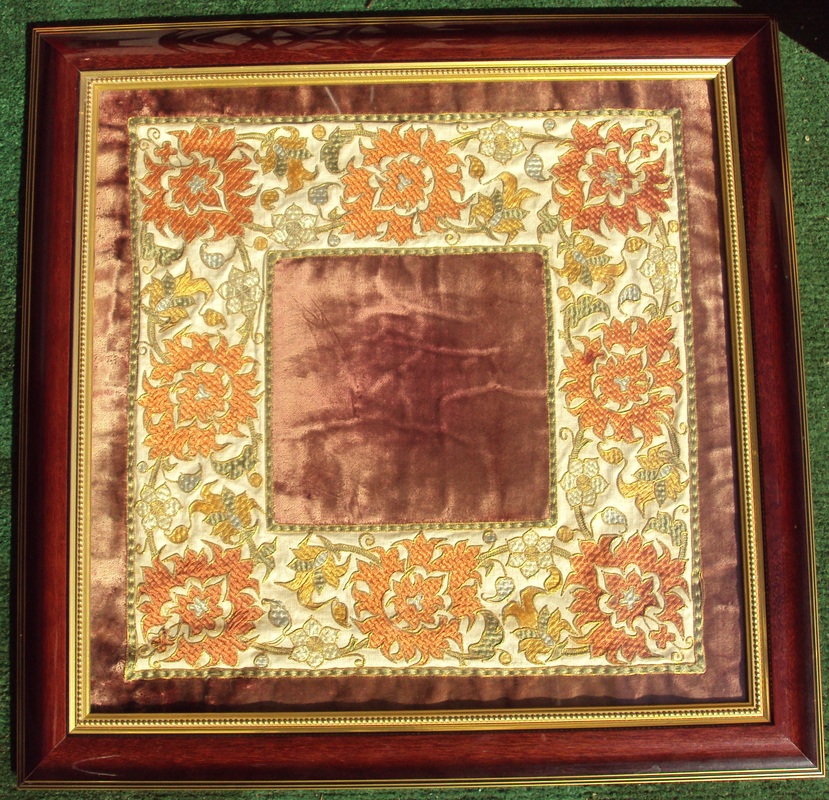 The Sohlberg Seamstresses and Embroiderers 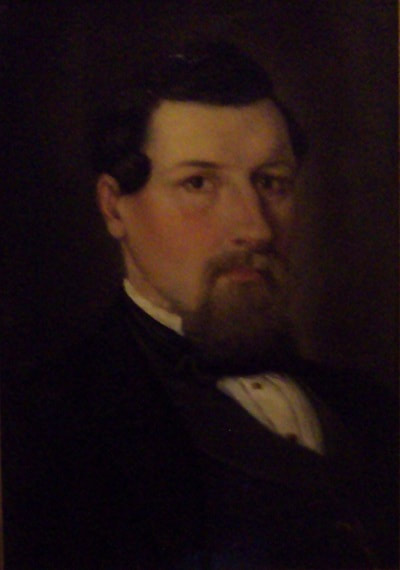 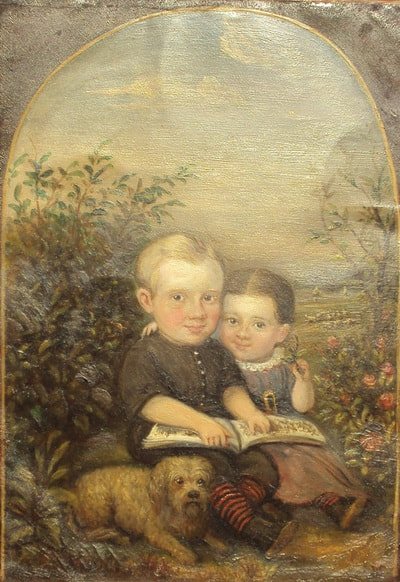 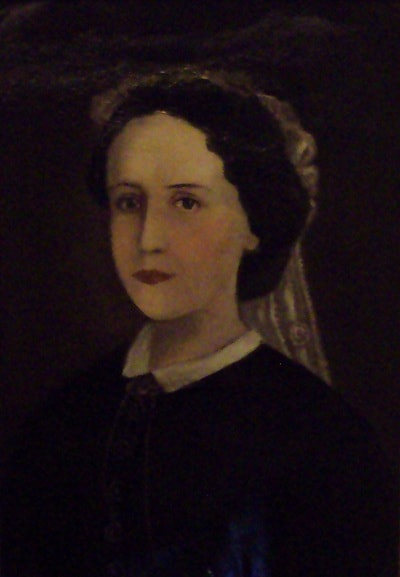 For more information on the
The Swedish Sohlberg Kosta  Portraits, 1867
Go ﻿HERE
​
The 1955 Swedish Custom Document for the "three portraits" &  the "two gold thread embroidery pieces"
- click on these -

- Research on the Sampler -
There has been considerable research concerning this type of needlework from the palaces of Sweden to the Swedish History Museum in Stockholm and to the Royal School of Needlework (RSN) at Hampton Court in England.

One email from the Swedish History Museum in Stockholm suggested that Swedish women traveled to the Royal School of Needlework in London to learn this type of needlework because there was no school in Sweden.

The other emails from the Royal School of Needlework from Hampton Court Palace, Surrey, England, suggested that the Sampler could have been created from the Vienna School of Art Needlework at the end of the 18th century to the beginning of the 19th century when it was not at all unusual for Swedes to travel by train to go there to study.  One email further stated that the Vienna School dissolved some time ago.  It was formed in 1878, six years after the Royal School of Needlework began, and it was structured somewhat similarly with a high standard of work produced by the students.

​Here are the emails to read:
​

Download File
The 2014 meeting with Dr. Susan Kay-Williams, Chief Executive of the Royal School of Needlework at Hampton Court

In 2014, Dr. Susan Kay-Williams, Chief Executive of the Royal School of Needlework, graciously made time to meet with me, at the Hyatt Regency San Francisco Airport to study these pieces during her summer annual "seminar" trip to the States.  Other than discussing the pieces exquisite workmanship of Nina Sohlberg, Dr. Susan Kay-Williams could offer no new information on the "Sampler," as to where Nina was trained or knowing about any other samplers like it.

​In 2019, Nina Sohlberg's two embroidery pieces from our family's Smoky Valley Lindsborg, Kansas, Swedish American estate, were donated to the San Francisco School of Needlework and Design.  All Swedish and Swedish American institutions were first contacted and for various reasons all but one could not accept these as a donation.  Also, interestingly, they did not have any additional information about this type of needlework.

Through this laborious and time consuming effort of trying to find a home for these pieces through out the United States and in Sweden,  destiny would have it that I learned about an embroidery class being taught by the San Francisco School of Needlework and Design by Ms. Lucy Barter through the Atherton Arts Foundation in Atherton, California, just a few minutes from my home.  When I brought Nina Sohlberg's pieces to the Atherton Arts Foundation that day to be part of Ms. Barter's class, the search for their new home, unknowingly to me at the time, had come to an end, for their home had been found in the loving hands of Ms. Barter who, for sure, would treasure them and treat them with the care they so deserved and who would use them with her classes at the San Francisco School of Needlework and Design. 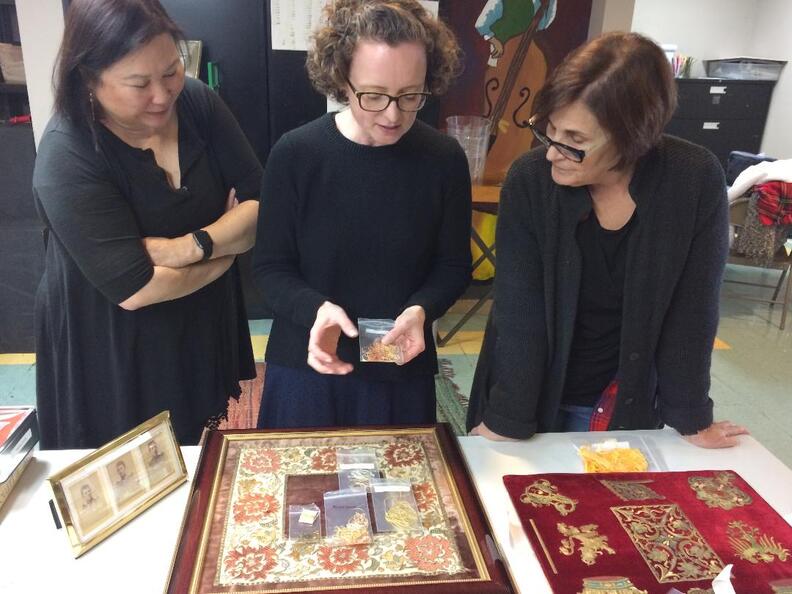