Chapter 22 CORONADO HEIGHTS  from THEN

Coronado Heights certainly must have drawn the early immigrants to its very top to view the many miles of tall grass and rolling hills. What a sight for them to write home about in those early days on the prairie. The Smoky Valley viewed from the top of this highest hill provided a gorgeous site in the 1860s and certainly the same is true today.

Historians differ in identifying the route of Francisco Vasquez de Coronado, the famous Spanish explorer. It has been said, it is quite likely that the Smoky Valley was visited by the Spaniards in July 1541, so the recorded history of Lindsborg and Coronado Heights may have begun then rather than with the arrival of the first colonists.

A footpath was built, early on, to the summit of the southeast slope. This path was named "Olsson Trail" to honor the memory of the first leader of the settlers [Founder of Lindsborg and Bethany Church]. Later a rough and winding road was built from the bottom to the top, six tenths of a mile, and is known as the Swensson Road in honor of the memory of Dr. Carl Swensson [Founder of Bethany College].

Today, Coronado Heights, located three miles northwest of Lindsborg, still stands as magically as ever, overlooking the town of Lindsborg and the Smoky Valley.  The scenery from the top of this hill is ever-changing with the seasons of the year.  The greening of the fields in March and SAApril and the sight of combines reaping the harvest in the fields in June and July are simply magnificent to view.

The maintenance of Coronado Heights is the responsibility of the Smoky Valley Historcal Association with special mention of Dr. Duane Fredrickson, a long-time Lindsborg Physician, who has made it his project to almost weekly check and clean up the picnic area and the fort on the top of the hill for many years.

WPA work project during the mid 1930s made possible the building of a nmber of picnic areas consrtructed of native rock and cement incluidng places to cook and barbecue.  Futher, it was at this time a castle was build of sandstone on the top, as well as bathrooms.  Work today is ongoing to rebuild some of these areas, along with needed improment of the winding road from bottom to top, which is six tenths of a mile.

Two primitive-appearing trails have been laid out from top to bottom of both the east and the southwest sides of Coronado.  Threse trails are used for hiking and at times for bicycles.  Competitive races are held from time to time on these trails for bicycles with entries from far and wide.

Coronado Heights has proven through the years as a popular picnic area with permanent tables and benches of cement and rock from which to enjoy the views while feasting on the food of choice.  Traffic on the rad up the hill gets almost daily use, except for in extremely inclement weather, by sightseers and for those planning a picnic or party.

As Chris Abercrombie [     ] of Lindsbor has pointed out, "today Coronado Height has hundreds of visitors each month, making it one of the most popular destinations in Central Kansas.  People from all over Kansas, and other states and foreing countries can be found exploring the hill on any given day.?

Coronado Heights perhaps brings more vivid memories of picnic times on the hill for senior citizens who grew up in the days when Coronado was the place to go for a family picnic.  Coronado picnics have pretty well been replaced by backyard barbecues in the more recent times.  However, most who have enjoyed Coronado Heights would agree with the recent selection of Coronado Heights as one of the 8 Wonders of Kansas in the category of Geography.

​Bill's greatest concern was that much of Lindsborg history may be lost.
​He would always end his writings with:
I met Bill initially during a layover of international travel from 1976 to 1977 living with my mother at the Deere home and working for Bill at the Bethany Home

​creditialed to write this -- a last living link to it

Bill was a last living like to the founder of Lindsborg, Rev. Olof Olsson who married his grandparents on April 17, 1887 who left the next day for America.  His grandfather Magnus Carlson was one of the Swedish Chicago organizing members of the First Swedish Agricultural Company of McPherson County. 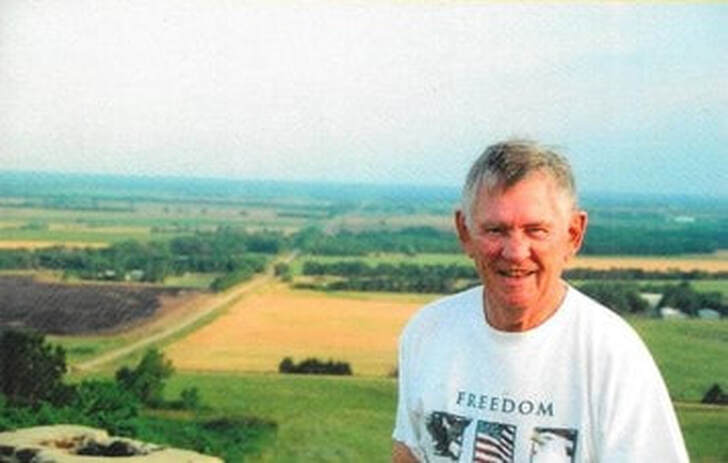 Chapter 20   ADDITIONAL HISTORY TO BE PRESERVED

BRICK STREETS ON MAIN STREETS
The first brick streets in Lindsborg were laid in 1917-1918.  Interesting to note:  A strong vote of the City Council in 1967 was to overlay the brick streets with asphalt.   This was defeated by a number of merchants led by Hilding Jaderborg, owner of the Swedish Crafts of Main Street.

ELECTRICITY AND WARTER
The first electrical and water plant brought light and water to the community in 1905.

FLOUR MILLS
The First Dam and Flour and Grist Mill was built in 1872 on the north bank of the Smoky Hill river. It was rebuilt in 1898 and named the Smoky Valley Roller Mill.

EARLY MANUFACTURING PLANT
The Hagstrom Manufacturing Company, built in 1907, was the first manufacturing company in the community employing around 105 people.

​
Chapter 21  TRADITIONS CONTINUED IN THE VALLEY

The Swedish immigrants who settled in the Smoky Valley brought with them traditions, habits and overall culture from the old country. We have pointed out, and again emphasize, family meals together around kitchen tables we're almost  we're almost sacred.  These were evidently very happy and intimate family times with members sharing happenings and plans for the day and future.

Christmas was a special time of the year for these Swedes from the province of Värmland who were now adjusting to living so far away from home in this new country.

Following days of planning and food preparation, the Christmas evening noon meal, known as dope i grytan (dip in the pot) officially commenced on the days of celebrating the birth of the Saviour Jesus Christ.

On a following page is a description how the custom of dope i grytan  was carried out in those early days and is still celebrated each year in many homes where Swedish descendants live. Cf Appendix, p. 99.

The Christmas evening meal continued the celebration with many Swedish delicacies, including lutfisk and ostkaka, along with many other Swedish recipe foods. Following the meal, as soon as dishes were cleared and washed, the family gathered around the Christmas tree to sing carols. Then to pacify the young members it was time for the father of the house to read the Christmas story from Luke 2 followed by a brief prayer time.   Only then was it time to open gifts.

Most of the family retired early, as on Christmas morning all would arise and make the trip by foot, or horse and wagon, to the church in all kinds of unpredictable Kansas weather in time for 5:00 a. m. Julotta worship service.

Following a rather lengthy service, families would greet each other and head for their homes for a bountiful Swedish breakfast. Often in those early years families would also join at church for a late afternoon light Christmas supper and a time of singing and fellowship.
*     *     *
​​~ Let Us Remember Them ~
*     *     *
Swedes: TheWayTheyWere
~ restoring lost local histories ~
reconnecting past to present