​"The Other Swedes"
​~ Honoring Them and Remembering Them ~ The Smoky Valley Writers ~
​Dr. Emory K. Lindquist 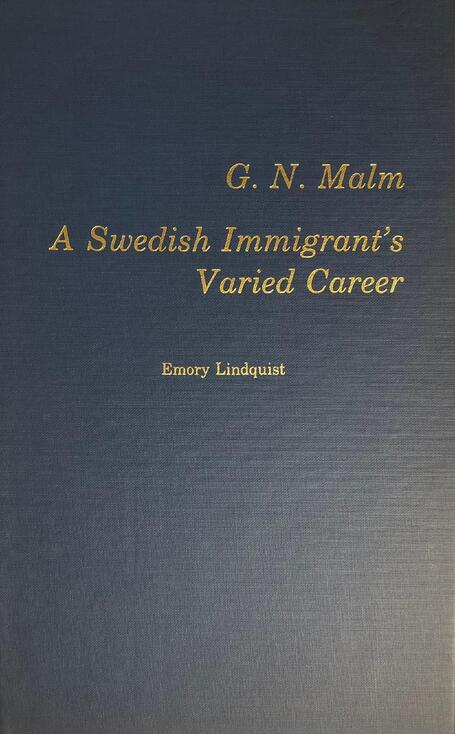 It was during the writing of this G. N. Malm book that Dr. Lindquist lost his central vision.  Yet, his faith pushed him on to finish it and to move on to his last book, the masterpiece on renowned artist Birger Sandzén (1871-1954) that was published just after his death in 1993.  In Dr. Lindquist's acknowledgements he gives his profound thanks to his dear wife, Irma, and dear brother, Ermal, who made if possible for him to finish these two fine books.   Thus, thanks to them, Lindsborg, Bethany College and I have these literary treasures as well, to finish up, his anthology of Smoky Valley books I used for creating SWEDES!
Since Bethany College Swedish American founder and second president Rev. Dr. Carl Aaron Swensson (1857-1904), it could be that Gustav Nathaniel "Nat" Malm (1869-1928) may have done more for the Lindsborg community than any other Swedish immigrant, who at the age of twenty-five came to Lindsborg to live with his wife, Mathilda Wredberg, at the invitation of Dr. Swensson, to help build the community.

Like Dr. Lindquist's other books, G. N. Malm is characterized by "extensive" research and "extensive" documentation: "Endnotes," "Selected Biography" and "Index."  It is the only comprehensive book on Mr. Malm and it is a "classic" and a "must read," especially for Swedish-America and Swedish university and college scholars interested in stories of Swedish immigration to America during the late 19th century continuing to the mid 20th century, and especially on the development of the "American Swedish" language during that period. This is a very important distinction that links the Smoky Valley and Lindsborg back to a scholarly study overseas to Scandinavian Sweden and Norway   This book should definitely be preserved for posterity and perpetuity by having it digitalized through "INTERNET ARCHIVE:" archive.org.

Dr. Lindquist and the other important authors of this story are notated below from the back of the book cover:
This biography of G. N. Malm presents the research and writing of four eminently qualified authors.  The principal author is Emory Lindquist.  Important chapters are by Nils Hasselmo, Vernon Holm and Dorothy Burton Skardal.  The varied career of Malm has required a broad scope of participation, which fortunately was achieved by enlisting authors who had special qualifications for their assignments.

Emory Lindquist, a native of Lindsborg, has recorded extensively the history of Swedish immigration, especially in the Smoky Valley of Central Kansas and Lindsborg.  Included in his publications are Smoky Valley People: A History of Lindsborg (1953); Bethany in Kansas: The History of a College (1975); five biographies of Swedish immigrants, and numerous chapters in books and articles.  A graduate of Bethany College (Kansas), he has received degrees from Oxford University, where he was a Rhodes Scholar, and the University of Colorado.  He is a former president of Bethany College and emeritus president and university professor at Wichita State University.  Dr. Lindquist discusses various aspects of the career of Malm as set forth in the table of contents.

Dorothy Burton Skårdal, senior lecturer in The American Institute, University of Oslo, discusses in detail the writings of Malm.  She is the preeminent authority of Scandinavian-American literature.  Her volume, The Divided Heart: Scandinavian Immigrant Experience Through Literary Sources (1974), has been widely acclaimed for its excellence.  A native of Nebraska with an undergraduate degree from Middlebury College, she received the Ph.D. degree from Harvard University.  She is the author of other books and numerous articles.  She resides in Norway which has been her home for many years.

Nils Hasselmo presents an excellent chapter on the "American Swedish" language that was used by G. N. Malm in his many works.  Dr. Hasselmo is a distinguished linguistic scholar and educator, president of the University of Minnesota, Minneapolis-St. Paul.  His book, Amerikasvenska:  En Bok om sprakutvecklingen i Svensk-Amerika (American Swedish:  A Book About Language Development in Swedish America), published in Sweden in 1974, is a classic in the linguistic field.  A native of Sweden, he attended Uppsala University, received his undergraduate degree from Augustana College, Rock Island, Illinois, and his Ph.D. degree from Harvard University.  Uppsala University has awarded him an honorary doctor of philosophy degree.  He has an extensive bibliography of writings in linguistics and related areas.

Vernon Holm has special qualifications through experience and research to describe the professional aspects of Malm's career as a designer and developer of a decorating system that attracted national attention in the painter's craft. In early years he was closely associated with Malm Brothers at Lindsborg.  Dr. Holm is a native of Lindsborg.  He holds his undergraduate degree from Bethany College, and his Ph. D. from the University of Kansas. His professional field is chemistry.  He served in important positions with a national oil company and the Bureau of Standards, Washington D.C. for many years. He has had a long-time interest in Swedish immigration history. He translated and edited, with comments, the interesting volume God's People in a New Land:  A Manuscript by Johan Phil (1984).

One of G. N. Malm's short stories has been translated from Swedish to English by Bertil H. Van Boer, a member of the faculty of Wichita State University. He received his undergraduate degree from the University of California-Berkeley and the Fil. dr. degree (Ph.D.) from Uppsala University.  His scholarly works in musicology have been published in Sweden and in the United States.
-------
Following are words of honor and respect from Dr. Emory K. Lindquist on G. N. Malm as well as gratitude to those who helped him with this project, producing this one-of-a-kind mixed Swedish American book.  The red font will be removed eventually.
-------
-------
​Acknowledgments
The author acknowledges with gratitude the splendid support of individuals and institutions with which some of them are associated. Not only were there helpful responses to requests for information but again and again suggestions were made that greatly enriched the content of the manuscript.

Reference has been made in the Preface to the fine interest and support of Alba Malm Almquist, the last surviving daughter of Mr. and Mrs. G. N. Malm.

Special appreciation is expressed to Dr. Vernon Holm, Bartlesville, Oklahoma; Dr. Nils Hasselmo, Minneapolis, Minnesota; Dr. Dorothy Burton, Skårdal, Oslo, Norway, for their excellent chapters.  Dr. Holm, a Lindsborg native and graduate of Bethany College, knew G. N. Malm and based the material in his chapter on stencils and stenciling from direct experience research.  His personal account is the only direct source in print on this subject.

Dr. Nils Hasselmo, president of the University of Minnesota, is recognized through his research and publications as the most imminent authority on what is known as "American Swedish." The usage resulted from the impact on the immigrants' native language by their exposure to the English language in the new milieu.

Dr. Dorothy Burton Skårdal, senior lecturer at the American Institute, University of Oslo, Norway, is recognized as an authority on Scandinavian-American literature. Her excellent volume, The Divided Heart: Scandinavian Immigrant Experience Through Literary Sources (1974), provides detailed and interesting information about the literary works of a large number of Scandinavians who lived and worked in the United States.

Dr. Bertil Van Boer, a member of the faculty of Wichita State University and author of books and articles related to the history of music in Sweden, enriched the volume by his translation of G. N. Malm's short story which is printed in the Appendix.

I appreciate greatly the splendid assistance of Naomi Carpenter, Wichita, in preparing the manuscript for publication.  Her skill and experience were meaningful and supportive.  Jay Richardson was helpful in preparing the Index.

A. John Pearson, director of college relations, Bethany College, editor, has been most helpful throughout this project.  His personal interest and professional skill have been important factors in achieving the goals of publication.  It has been a pleasure to be associated with him again in this publication project.

​I express my gratitude to the officers and members of the Smoky Vally Historical Association, Lindsborg, the publishers of this volume. 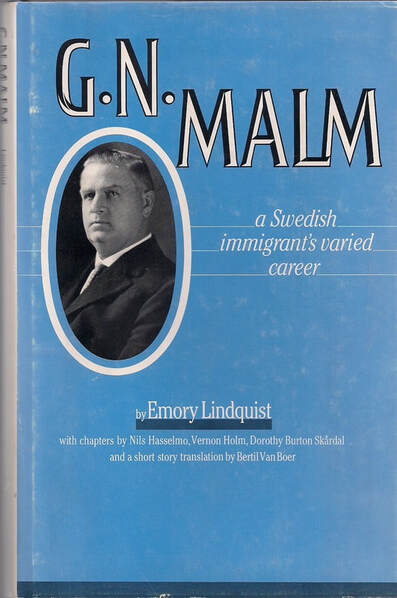 ​Dr. Lindquist dedication of this book was to G. N. Malm's surviving daughter from whom he acquired valuable first-hand knowledge on her father for this writing.  The dedication as shown below is found on page v.
To the Memory of
ALBA MALM ALMQUIST
1897 - 1986
-------
​*   *   *
"Let Us Remember Them"
*   *   *
Swedes: TheWayTheyWere
~ restoring lost local histories ~
reconnecting past to present
*     *     *
All color photography throughout Swedes:  The Way They Were is by Fran Cochran unless otherwise indicated, or obviously concluded it is not.
Copyright © 2021 www.swedesthewaytheywere.org.  All rights reserved.