"The Other Swedes"
​~ Honoring Them and Remembering Them ~ The Smoky Valley Writers ~
NEW
Dr. Leon George Lungstrom
(1915-2000)
~ Husband, Father, Citizen and Friend ~ His Värmland Swedish Ancestry
​
He met his wife Linda at Bethany College when she began teaching in 1964 in the music department.  They were married in 1965 and their children were Michael and Laura.  They were members of the Bethany Lutheran Church where Leon served three terms on the church board and also taught Sunday school.  They enjoyed horseback riding, camping and all the activities of Lindsborg.

Concurrently, Leon was a member of the McPherson County Historical Society that was established in 1961 where he served two terms as president, and of the American Scandinavian Association of the Great Plains that was established in 1971.  He was also a member the Smoky Valley Historical Society that was originally established in 1919 under the name, the Lindsborg Historical Society.  He was a member of the Rotary Club since 1954 and served as president and editor of the club bulletin.  His hobbies were painting, photography and dancing, studying ballroom dancing with the Arthur Murray and Fred Astaire studios.
Dr. Leon George Lungstrom
from his
1990
History of Natural Science and Mathematics at Bethany College, Lindsborg, Kansas
​​   Pages 229-234
"Dr. Leon George Lungstrom was born July 22, 1915, in New Gottland Township of McPherson County, Kansas.  He had five brothers, two sisters, and one half-sister.  One sister died in infancy from whooping cough.  He and two brothers served in the military during World War II, and one of his brothers, a flight officer in the Air Force, was killed in the service.  At the present time, he and one brother are the only survivors of their generation.  All of his immediate ancestors came from Sweden.  One relative, having traced the paternal ancestry, stated that many years previously one of the ancestors came from Ireland and settled in Sweden.  Lungstrom's paternal grandfather, Anders Andersson, was born in Storforsfallet Kroppa Parish, Värmland, in 1839, and came to America in 1867 from Lungsund, Värmland.  He changed his name to Andrew Lungstrom after his arrival in the new land.  The paternal grandmother, Matilda Maria (Carlsdotter) Finne (later spelled Finney) was born in Långbansande, Gåsborn, Värmland, in 1852, and came with her parents, sisters and brother, to the United States in 1868.  The maternal grandfather, Jan (John) Olaf Ekström, was born in Älvkarleby, Uppland, in 1835, and came to America in 1869.  The maternal grandmother, Kristina Magdalena Ericksdotter, was born in Gävle, Gästrickland in 1835, and came to America from Hille, Gästrickland in 1870 as a widow, Mrs. Nils Hillbom, with two small children.  She married John Ekstrom and they purchased a farm in Section 26 of Smoky Hill Township near Lindsborg and farming became their life's profession.  Their first home on the farm was a dugout.  Every now and then they would observe a bull snake hanging down through the ceiling.  During the early years of family life on this farm, occasionally Indians stopped to get tobacco or food to eat.

"George Lungstrom and Jennie Ekstrom, Leon's parents, were married March 12, 1902, by [Rev.] Dr. Ernest F. Pihlblad [assistant to Rev. Dr. Carl Aaron Swensson, pastor of Bethany Lutheran Church and founder of Bethany College].  They operated a farm in New Gottland Township which was composed of the northwest quarter of Section 2, and the southeast quarter of Section 3 in that township.

"Leon remembers his early years on the farm.  The home had a wood-burning cook stove with an attached reservoir to heat rainwater from the cistern for washing dishes and clothes.  The house was heated by this stove and another wood-burning stove during the cold winters.  The usual fuel was osage orange, called "hedge" by everyone.  The house had neither running water nor any indoor plumbing.  Illumination at night was by kerosene lamps.  At that time this type of lighting seemed to serve the purpose, but when compared with present-day electrical light, the illumination from such a lamp appears to be weak by comparison.  The family took baths in a large galvanized tub that was partially filled with warm water.  During cold weather in mid-winter, probably one or two baths a week would be fairly common.  However, during summer the daily bath became a necessity.  Often only one or two trips were made to town each week, usually for the purpose of buying groceries and other necessities.  Saturday night was the big occasion when the farm families spent the evening in town.  The grocery stores, drug stores and other businesses would stay open until midnight.  This was an important opportunity for neighbors and friends to visit.

"During this period in the family history much of the family food was prepared at home.  This involved bread baking, butchering a hog or beef, smoking or canning the meat or preparing it some other way so it would keep without refrigeration.  This of course was less of a problem during winter.  Often during winter months meat for the table came from wild cottontail rabbits hunted in the snow drifts along the hedge fences.  Garden produce, such as carrots, potatoes and turnips, was stored during the fall in underground pits covered with straw so the vegetables would keep under the natural conditions of the earth and not freeze.  Chickens or guinea fowl were a handy source of fresh meat at any time during the year.  Every farmer at that time had his own egg and milk supply.  The cotton sacks in which flour was purchased were bleached and used for tea towels or certain other items of clothing.  A considerable amount of sewing was done by the women at home.  By comparison with life today, daily existence was not as complicated, but on the other hand the work was more strenuous in physical demand.  George Lungstrom became involved in raising quality registered Hereford cattle and was successfully engaged in this program as a part of his farming operations.  By 1920 he felt financially able to build a new house on the farm which he owned.  The family had already by April of that year determined the location where it was to be built.

"During mid-April five members of the family became involved in an unpleasant experience [a car accident] . . .

"The new house was never built, although the family continued living on the farm.  The family suffered repeated financial stress, which continued into the depression of the early 1930s and the drought and dust storms of the mid-1930s.  Finally, the farm was lost by foreclosure in the spring of 1938.

"Before moving out of the neighborhood, the family was pleasantly entertained by a surprise party which all their neighbors attended.  In spite of financial stress and other difficulties, family life on the farm had been very pleasant for the Lungstrom family.

"Leon, his father, and all his brothers and sisters, had graduated from a little white country school called West Kentuck.  It is presently on display at the McPherson County Old Mill Museum.  In its original location, it stood on a hill, with prairie grass as the lawn cover, at the extreme south end of Section 11 in New Gottland Township.  The west double lane section of Highway I-35 runs directly over its original location.  An osage orange hedge fence still exists [may not now in 2022 - 30 years later] between the two sections of the highway.  This row of trees was the eastern boundary of the original schoolyard.

"Only three of the Lungstrom children, Evangeline, Leon and Marion, had opportunity to study beyond the grade-school level of education.  All three continued into college.  The older Lungstrom children, due to the misfortune which happened in 1920 and conditions which continued thereafter, were required to work to help support the family.  Leon, by making comparisons with his two older brothers, felt that they surpassed him considerably in intellectual ability.  "Unfortunately, their wish to continue in education could not be realized.  This, Leon feels, is a great misfortune and a terrible loss. . . ."
​Leon's Smoky Valley I 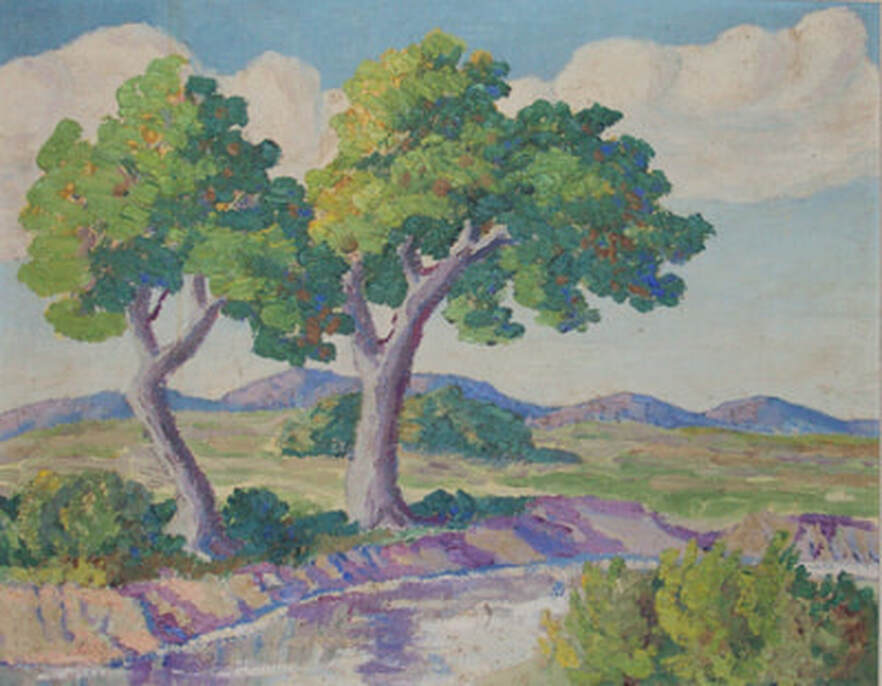 Leon was a student of professor artist Birger Sandzén.
​​The friend he was to the Deere family
Leon George Lungstrom was a dear and devoted friend to Emil O. Deere who may have considered him a son.  He was also his student at Bethany College.  Our family always referred to Dr. Lungstrom as Leon, as that is how Emil referred to him.  Leon would continue to visit our home, Deere House, after Emil's death visiting my grandmother Nina Sohlberg Fry, who inherited the home, and then my mother Lois Fry Cochran when she became owner.

When I was on several long-term visits with my mother there between European travel (1976-1978) and between jobs (1980-1981), I enjoyed these regular visits with Leon as well.  It was always a joy listening to him on "his Bethany College history."  From the time of Deere's death in 1966 to his own in 2000, Leon would each Memorial Day place flowers on Emil's grave at the Lindsborg Elmwood Cemetery, as their history of knowing each other went back a very long time.   When Emil and Lydia had finished building the house of their dreams, Deere House at 344 North First Street, Leon was there in 1940 to help Emil with the landscaping and to plant grass, and trees around it.  Leon always referred to Lydia as "Mrs. Deere" and Emil as "Dean Deere" or "Dr. Deere" in the formal way then.

​And about trees, in his book he reported that since 1967 to the year of its publication in 1990, he had planted 1,400 trees, I assume in Lindsborg.
Leon's Smoky Valley II 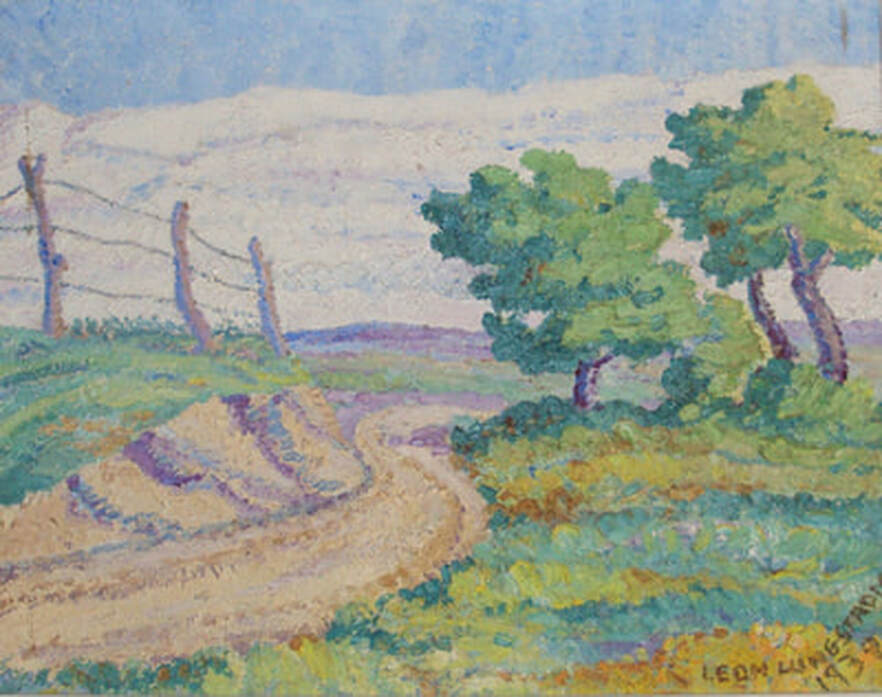 Leon was a student of professor artist Birger Sandzén.
*     *     *
​​~ Let Us Remember Them ~
*     *     *
Swedes: TheWayTheyWere
~ restoring lost local histories ~
reconnecting past to present
*     *     *
All color photography throughout Swedes: The Way They Were is by Fran Cochran unless otherwise indicated.
Copyright © since October 8, 2015 to Current Year
as indicated on main menu sections of
www.swedesthewaytheywere.org.  All rights reserved.