"The Other Swedes"
~ Honoring Him and His Works ~

Dr. Mark Lucas
~ Messiah conductor bringing the Lindsborg “Oberammergau of the Plains" to a "new" world stage
21st century Lindsborg's Bethany College Oratorio Society Messiah conductor Dr. Mark Lucas will go down in college history as the conductor who presented a "first" Presser Hall Copley Stage live performance of the Messiah worldwide through the technology of live streaming during the 2020 Covid pandemic.  This performance of October 18, 2020, was severely modified at all levels, for with Dr. Lucas, there were 32 singers and an orchestra composed of a dozen musicians. All masked and socially distanced, they performed the sacred music with its profound message beautifully and flawlessly.   In 2021, as the pandemic continued, it was once again performed brilliantly.  With masks worn by all and social distancing in place, a small balcony audience was allowed as well as a full chorus spaced out in the audience section and a full orchestra spaced out on the Copley Stage.

Thus, this pandemic live streaming debut began a new and exciting chapter for the Lindsborg Bethany College Oratorio Society Messiah, the “Oberammergau of the Plains," as it was titled in the 1944 Reader's Digest article which noted that the Messiah festival is called by critics ”the finest of its kind in the world.”

For, through livestreaming, it can now reach the world and those Swedish and Swedish American audiences of today, especially those so familiar with its historical significance to Swedish America from past generations, telling the stories of the Lindsborg Bethany College Messiah performances.

For Lindsborg residents have been singing the Messiah since 1881 and performing it annually since 1882, during Easter Holy Week with some of the largest choruses numbering near 600 singers which in the earlier days attracted innumerable opera stars and musicians from Europe and New York City to perform in, as noted Here in SWEDES' section "Messiah" Performers, Venues & Audiences, Press and Broadcasts, while attracting thousands of faithful patrons to be inspired by it.  The chorus, perhaps, even larger than 600 singers, is certainly noted Here during the 1981 Centennial Celebration with Dr. Elmer Copley conducting the "Hallelujah" chorus.
The Messiah, Lindsborg & Bethany College

"What is this sacred music composed by German George Frideric Handel, ​that
"In Lindsborg, the Messiah is religion ..." quoted the New York Times, in 1939?
​
Performed annually since 1882, thus far it has had 28 conductors, Lindsborg Bethany College professors.

For viewers unfamiliar with the sacred Messiah music, it is a powerful and emotionally moving oratorio (a composition for large choruses) composed by German George Frideric Handel (1685–1759).   In 1741, he was commissioned by Dublin's Lord Lieutenant to write a new oratorio based on a biblical libretto (the text for an opera) that friend and art patron Charles Jennes composed for it and assembled it with Handel's oratorio that he finished in 24 days in September.  It made its debut on April 13, 1742, at the New Music Hall in Dublin.  Nearly a year later, it received its London premiere.

Believed by Christians to have been divinely inspired, the lyrics are from the King James Bible and ​the literal text represents the development of the Christian plan of salvation, dividing it into 3 parts: Jesus‘ birth and life, redemption, and resurrection.  Lindsborg's Bethany Lutheran Church member residents have been singing the Messiah since 1881, the birth year of Bethany College, and performing it annually since 1882, when early on, other protestant church denominations joined in, forming choruses as large as 500 and 600 singers, being directed by college professor conductors first at the 4,000 seat capacity of the Messiah Auditorium and in 1929 at the 1,800 seat capacity of Presser Hall.  This, in the earlier days, attracted countless opera singers and musicians from Europe and New York City to perform in it, while attracting thousands of faithful patrons, who were inspired by it, with the press reporting about it.

​ " . . . In Lindsborg, the Messiah is religion—as much a part of the Swedish peoples worship as the church services which they attend every Sunday.  It is an outpouring of the story they believe—the voice of John the Baptist crying in the wilderness, the birth of Jesus, His ministry, His crucifixion, and the triumphant resurrection with its resounding ‘Hallelujah.’ ” (​Source: Dr. Emory Lindquist's 1975 Bethany in Kansas, page 168)

The Messiah has always been performed during Holy Easter Week on Palm Sunday for decades to the year 2013 when it was discontinued, and, of course, on Easter Sundays.  It was in 1925 Johann Sebastian Bach's (1685-1750) St. Matthew Passion became a part of the weeklong event which in 1929 has been performed on Good Friday ever since.  Also, earlier in 1899, was the introduction of the first Swedish Artists' Art Exhibition.  This is known as the Annual Midwest Art Exhibition, and like the singing of the Messiah, continues to this day.  The combination of the Holy Easter Week's sacred music performances and the art exhibition is referred to as the "Messiah Festival of the Arts" that you can go to HERE for information.

​Go Here to see and hear Dr. Lucas conducting Lindsborg's Bethany College Oratorio Society Bach's St. Matthew Passion's final chorus, "My Jesus Good Night," Good Friday 2014; and go Here, to see and hear him conducting Handel's Messiah's  "Worthy is the Lamb" and the final "Amen" chorus, Easter Sunday 2015.
*   *   *
Dr. Lucas began his career at Bethany College in 2013.  As of this writing, February 22, 2021, beside being the Messiah Conductor, he is the Associate Professor of the Music Department as well as a co-chair.  He is also the Director of Choral Activities and of those of the Bethany College Oratorio Society.

After graduating from Bethany College with a Bachelor of Arts Degree in Music Education, at the University of Oklahoma (OU), Norman, Oklahoma, he earned a Masters Degree in Choral Conducting in 1994, and, later in 2007 from OU, he earned a Doctor of Philosophy Degree with his dissertation on "Adolescent Males’ Motivation to Enroll or Not Enroll in Choir."   In 2015, he traveled to Kyoto, Japan, to participate in the Poster session at the International Symposium on "Performance Science" where he presented portions of his dissertation.  In that same year he introduced the College to its first "Real Men Sing Festival" that has become an annual festival where in 2020, just before Covid 19, an impressive chorus of 800 students gathered, from grades five through twelve, to perform in Presser Hall for this festival.

Dr. Lucas could be easily referred to as "the European traveling conductor" due to his many tours to Europe.  His most recent tour, and the first one under his supervision for the  Bethany College Choir, the Handbell Ensemble and college alumni, in May of 2018, was to Germany, the home of Martin Luther and the Protestant Reformation and that of the classical composers including George Frideric Handel, Johann Sebastian Bach, Richard Wagner, and Felix Mendelssohn; and to Sweden, the home of the Swedish Lindsborg residents' antecedents, the Bethany Lutheran Church pastors and Bethany College professors of the earliest times.
2018
Sweden
European Traveling Conductor Dr. Lucas and the Bethany College Choir 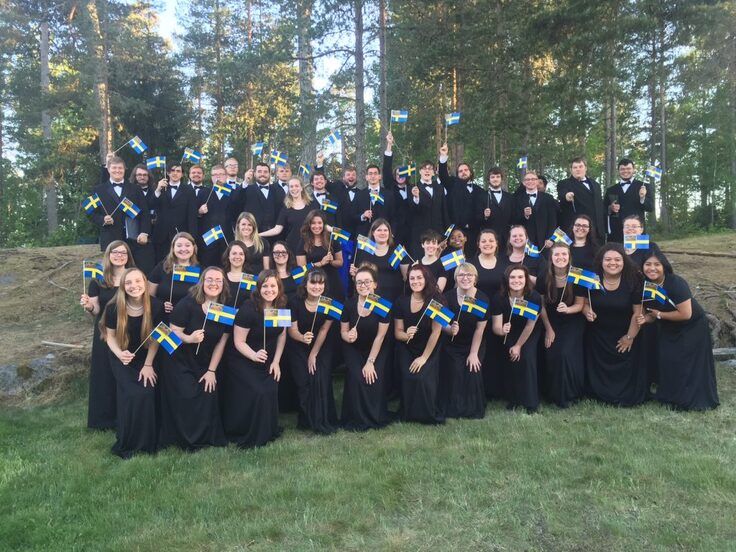 Courtesy of Bethany College Oratorio Society "Messiah" conductor Dr. Mark Lucas
​Before working at Bethany, Dr. Lucas made three major significant European musical tours during his graduate studies and tenure at the University of Oklahoma, creating a very impressive European travel record of conducting musical groups.  Thus, once the pandemic is under control and international travel returns to open borders in all of Europe, it would seem that this Bethany College Messiah conductor will continue traveling there with the choir to perform their music, while continuing to share these historic Lindsborg Bethany College Oratorio Society Messiah performances in person at Presser Hall and virtually on the "new" world stage!
​
More on this Messiah history can be found as follows:

Go Here to  Olsson's Influence & the Swenssons' Musicians' and Singers' "Messiah", 1882 on ...
Go Here to Their Bethany College Handel's "Messiah" Performances, 1882 on...
Go Here to "Messiah" Performers, Venues & Audiences, Press and Broadcasts
Go Here to Bethany College "Messiah Auditorium" / "Ling Auditorium" / "Ling Gymnasium" 1895 - 1946
​
*   *   *
Swedes: TheWayTheyWere
~ restoring lost local histories ~
reconnecting past to present
*     *     *
All color photography throughout Swedes:  The Way They Were is by Fran Cochran unless otherwise indicated, or obviously concluded it is not.
Copyright © 2021 www.swedesthewaytheywere.org.  All rights reserved.