Taken from the  book cover, we read:

​When G. N. Malm emigrated to the United States from Sweden in 1889, the pattern of life brought him, within a few years, to Lindsborg, Kansas, which was his residence until his death in 1928.

Almost 6 decades elapsed between his birth in the rural area near Lake Vännern in beautiful Västergötland and his death in the distance Smoky Valley of Central Kansas. These years were filled with varied and constructive activities.

Author, artist, promoter of education, civic and community leader, entrepreneur, independent thinker in social, economic and political issues – he often marched to the beat of a different drummer.

Malm’s distinguished contribution to the arts and literature and to organizations and institutions was made possible through his creation and development of a unique and effective decorating process which became known nationally as the Acme Quality Decorative System, thus providing him economic resources essential for achieving these other goals.

Malm undoubtedly will be best known to posterity because of his literary achievement. His full length novel Charlie Johnson: Svensk-Amerikan (1909), his four-act drama Härute (Out Here),1919, and more than thirty short stories in “American Swedish“ provide magnificent resources for understanding the immigrant tradition and its role in American life. Landscapes, altar paintings, watercolors and print present evidence of his considerable talent in art.

Inspired by the leadership of Dr. Carl A. Swensson, founder and president of Bethany College, “Nate” Malm was a leader in promoting Bethany College, the “Messiah “oratorio tradition, and financial support for the academic program. In later years, the construction of Presser Hall owed much to his leadership.

The biography of G.N. Malm greatly enriches our knowledge of the history of Lindsborg and the Smoky Valley. Again and again he held leadership roles in civic and community affairs. As president of the Lindsborg Commercial Club, he sought to stimulate economic development and employment in the area. His sense of history caused him to be the prime mover in the Coronado Heights project which commemorates the arrival of Coronado and his Conquistadores in the Smoky Valley in 1541.

Although deeply devoted to this Swedish language and culture, he realized that the future of the immigrants and their children depended upon knowledge of the language of the land and its institutions. He became the central figure in heated controversy on the subject. Malm was the leader in organizing the Messiah Lutheran congregation in Lindsborg as a logical solution of providing worship services in the English language. In considering the mission of the Christian church at large, he emphasized the responsibility for creating a more just society.

Malm was an independent thinker in economic and social issues. In an age of rapid industrial growth, he supported the rights of those who labor, pointing out his own background in Sweden and his experiences in America prior to the success of his later role in management. He urged the immigrants and their children to be participants, rather than spectators, in the rapidly changing economic and social world in which they lived. Although critical of some aspects of American life, he believed in the American dream and the achievement of true democracy and justice.

Although Malm was a man fully occupied by his own professional responsibilities and his many other activities, he had a large circle of friends. Many of them were immigrants, like himself, who knew him through his literary works and his vast number of articles on political and social issues in the Swedish- American press. He had many other associates and friends through his affiliation with the Acme White Lead and Color Works, Detroit, based also on his articles and trade journals and lectures throughout the nation.
​
The Preface
When Gustav Nathaniel Malm first saw the light of day in 1869 in the rural parish of Svarttorp in the idyllic natural beauty of Småland, Sweden, near Lake Vättern, the likelihood that he would spend four of the six decades of his life at Lindsborg, in central Kansas, seemed remote. This unexpected odyssey occurred when he was one of approximately 300,000 Swedes who immigrated to the United States in the decade of the 1880s. His crossing of the Atlantic in 1889 had been preceded by that of his parents, three brothers and a sister a few months earlier.

Although young Malm had few worldly possessions as he began his adventure in America, he had rich personal resources from his parental home and other experiences. Per August, Gustav’s father, a teacher and lay religious worker, and Mathilda, a sensitive and devoted mother, made available fine values and great encouragement as well as providing by example qualities of life that would be meaningful to Gustav.

The son recalled with gratitude the time given by his mother in reading interesting stories and presenting other accounts from her vivid fantasy and imagination. These happy experiences were factors later in life as he used his talent and insight to produce a varied number of literary works. The youth sensed that his father was a fearless dissenter on religious issues, and at the age of 45 the son wrote a letter to his father declaring that his forthright criticism of wrongs in society and in human relations had its source in the example provided by his father.

An alert teacher observed Gustav’s interest in free hand drawing and gave him special lessons. This contributed to his interest in art which later provided important resources for his professional career as a decorative designer and in producing paintings and prints. The choir boy at Hjo, who early showed great interest in music, became identified in America with a 400-voice oratorio society as a member of the tenor section, general secretary of the organization and a life long promoter of the fine arts.

Young Malm’s early formal education was in the Hjo elementary school and was followed by more advanced studies in Jönköping.  He shared in private tutors at the Almnäs estate of Count and Countess Mauritz Posse. Young Gustav was invited to live there and participate with their two sons in this fine opportunity for learning.

When Malm had completed three years in the Jönköping school, it was necessary for him because of financial problems to exchange formal studies for learning a trade. He became an apprentice painter at Nässjö with a well-known master painter, and after four years he had achieved that goal in his own life. This was a resource for a distinguished career with a national paint and decorating company in which his creative talent and great skill brought not only national recognition but made it possible economically for him to engage also in several other constructive activities that characterize his life and work.

When G. N. Malm emigrated to America in 1889, he was accompanied by his fiancée, Mathilda Wredberg. They had decided to share their lives together in America, and when their economic situation made it feasible, they would marry. This occurred in 1893.

Lindsborg, Kansas, was their residence, except for their first year of married life, until the husband’s death in 1928. The family circle included three daughters, Viola, Alba and Amrah.

This volume seeks to discuss the career of G. N. Malm from his birth in Sweden until his death in Kansas. His was a busy and full life.  His principal occupation and craft develop from his artistic talent and from his training and experience as a master painter. These resources enabled him to create and develop a distinctive decorative system which was adopted and promoted by the nationally known Acme White Lead and Color Works, Detroit. Malm was the head designer of his decorative system which was distributed and used in various sections of the United States. Although being heavily involved professionally in preparing the design and content of the decorative system, writing monographs and catalogues, presenting demonstrations and traveling extensively, he was able to carry on a wide variety of other activities with substantial success.

The pages that follow describe most of them. He was an author, artist, lover of music and promoter of the fine arts. He was a successful businessman and dedicated spokesman for progress in his community. His social thought was often viewed as being controversial. Malm sought to promote the good life for individuals and society.

G.N. Malm’s many-sided life and commitments precluded great distinction in all of them. His professional career as a designer and decorator, as indicated above, attained that status.  His literary efforts were indeed praiseworthy. His novel, Charlie Johnson: Svensk-Amerikan (Charli Johnson: Swedish-American) is a graphic description of immigrant life written in “American Swedish,” showing the influence of the English language on usage of the mother tongue of the immigrant.  Thirty short stories, a four act play, Härute (Out Here), with an early 20th century setting in Kansas, and many articles in periodicals and newspapers attest to his great talent as an author. He used the Swedish language almost exclusively in his literary works.

Malm’s service in behalf of Bethany College, the Bethany College Oratorio Society, the Lindsborg Historical Society, the Lindsborg community and its history and development, constituted a splendid contribution at that time and for posterity. As a painter and print maker his works are generally of good quality and his altar paintings are still highly esteemed and appreciated.

Although Malm’s life was full of activity, he had many close professional and personal friends. He was an avid correspondent and took time on his travels to renew friendships and meet new people. His family life with its house and garden provided great joy and fellowship, but there was also a time of distress.

The variety of Malm’s career and interests may cause quite different responses among readers, with the result that some chapters may have a special interest to some of them and quite modest response from others. However, there is continuity and relevance in the midst of the considerable diversity.

The manuscript is immensely enriched by three chapters written by Nils Hasselmo, Vernon Holm and Dorothy Burton Skårdal.  Their special contribution is garnered from personal, technical knowledge and research of the finest quality in the context of the use of stencils in the decorative system and in Malm's literary achievement and the language usage of the Swedish immigrant. The translation into English of one of Malm's short stories by Bertil Van Boer further enriches the content of this volume. These sources are identified in the section on “Acknowledgments. “

It has been a great pleasure and privilege for this the principal author to do the research and study related to this manuscript. The sources have been varied and rewarding. The interest of Alba Malm Almquist, G. N. Malm’s daughter, prior to her death in 1986 was stimulating and helpful. Her support and the desire of members of the Smoky Valley Historical Association to publish a biography of G N Malm have been decisive factors in undertaking this assignment.

In the context of circumstances that have made it impossible for me to participate in a normal manner in completing this manuscript, I have received unfailing support and assistance without which it would not have been possible to publish this volume. My appreciation is expressed in the “Acknowledgments.”

In a word to readers of his novel Charlie Johnson: Svensk-American, Malm recounted his experience during boyhood years at HJO when he live locked in a tittskåp which in kaleidoscope fashion provided a series of interesting scenes. Similarly, the author hopes that this biography with its changing scenes will accomplish that purpose in portraying the life and experiences of G. N. Malm.  Malm found life interesting and challenging. His career also should provide evidence why so many immigrants found America to be framtidslandet, “the land of the future.” 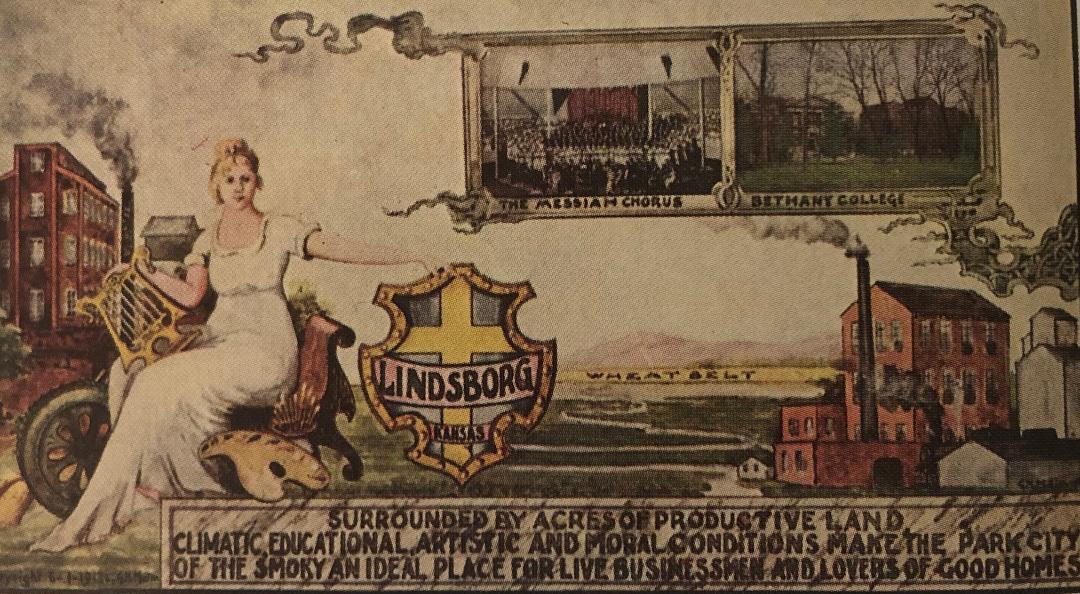 Source: Dr. Lindquist's 1986 "G.N. Malm, page 54.
SOURCES:  G. N. Malm -- A Swedish Immigrant's Varied Career by Dr. Emory Lindquist
*   *   *
Swedes: TheWayTheyWere
~ restoring lost local histories ~
reconnecting past to present
*     *     *
All color photography throughout Swedes:  The Way They Were is by Fran Cochran unless otherwise indicated, or obviously concluded it is not.
Copyright © 2021 www.swedesthewaytheywere.org.  All rights reserved.