​The Lindsborg News-Record Review
"A look behind the Art of Lydia's World"
by
John Marshall*
March 31, 2011
Printed April 7th
"The effect of a good painting, like a good paragraph, is to make something that was ground out seem as though it were dashed off.  You think, “Oh, I could do that.” Until you realize that you can’t.

"One part of an eye-opening exhibit in downtown Lindsborg reveals the groundwork behind the painting of a Kansas landscape: photocopies of the notes and sketches of the late Lydia Sohlberg-Deere.  From her, we learn, the whole image began with the parts, with making lines, noting colors and shadows, rock-by-rock, sprig and bush, the slant of a hill to tree and water, the sweep and hue of a pearl sky.  Here we see the grinding work behind an image that seems so natural that it must have appeared with only a few sweeps of a brush.

"The Hidden Art and Photography of Lydia Sohlberg-Deere opened March 24 at the former Studio Lindsborg, 113 N. Main, and will run through Easter Sunday, April 24.  A public reception will be from 4 – 7 PM. Sunday, April 3, at the gallery.

"The exhibit is the final public showing of the art of Sohlberg-Deere, who photographed much of life in Lindsborg and at Bethany College at the turn of the last century and into the early 1900s.  Mrs. Sohlberg-Deere, who died in 1943, was a prolific photographer and a talented painter who studied at one time under the iconic Birger Sandzén.  She was married to Prof. Emil O. Deere, a leader among early faculty and administrators at Bethany College.

"This vast show may require at least two visits – the first, a scouting mission to consider the reach of 130 photographs and copies of paintings and the scope of their history; another, perhaps, is to take in the many diaries, sketch books and notes, the letters and cards among the Deeres, the Sohlbergs, the Sandzéns, their families and friends (Three visits would be better.)

"Many of Lydia’s photographs have been exhibited in “Lydia’s World,” a periodic display in the windows of the Sundstrom Building at Main and Lincoln Streets in downtown Lindsborg.  Mrs. Sohlberg-Deere’s great grand niece, Fran Cochran, organized those exhibits and this show.  Cochran, of Menlo Park, Calif., is a 1968 graduate of Bethany College and has written numerous historical articles for the News-Records."
*Mr. Marshall, then, was the owner and editor of the Lindsborg News Record (LNR).  After selling the newspaper in 2012, he continues to write a column for it titled "The Valley Voice" and a column for the Rural Messenger for Central Kansas.
Studio 113 North Main
- site of Lydia's World last exhibition -
2011 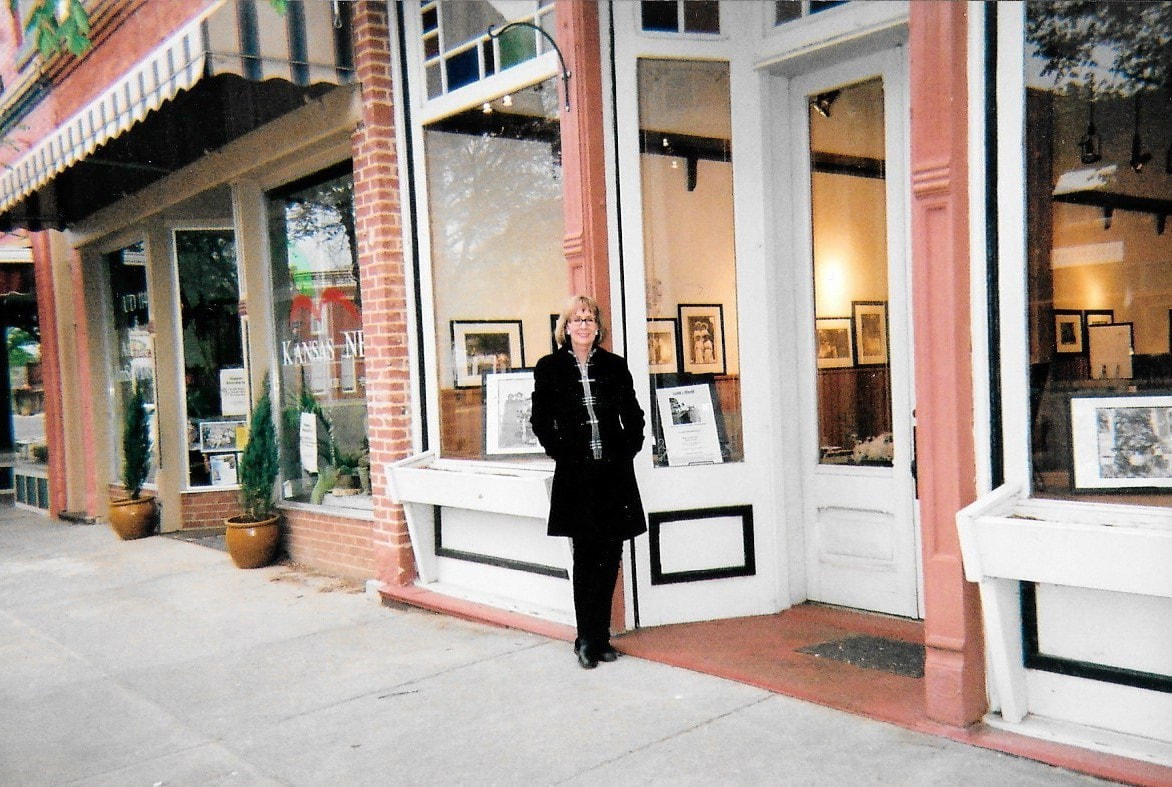 SPECIAL THANKS TO
- an incredible community embracing the arts -
and
for this show
PARTICULAR THANKS TO
Jim Pugh, owner of Studio 113
Brian Freeman who saw that everything ran smoothly at Studio 113
Larry and Liz Peters for their warm hospitality
Kathryn Frantz for her ongoing assistance during the exhibition and for helping me scrub the floor
Larry and Marla Elmquist for their ongoing kind hospitality, storing the Gallery several years before the show and more
Raymer Society Director Marsha Howe for offering to me the artist-in-residence studio to use
*   *   *

From Bethany College Vice President for Institutional of Advancement Karen Humphrey, "This past week I’ve had a better opportunity to review the photos from the Sohlberg-Deere collection [at the Sandzén Gallery].  They are just wonderful, Fran.  What a window they give us on life at Bethany College in another generation.  Denise Carson, who, in her position as Librarian, is also head of the Archives.  She will be communicating with you directly regarding her comments and the possibilities for the collection to find a permanent home at Bethany College." **

From Bethany College Director of Library Services Wallerstedt Library Denise Carson, "I had the opportunity to view the photos at the Sandzén Gallery.  They are wonderful!  It [Bethany College] truly must have been a very unique place during the time of these photos. The past two months I have been creating and putting up the 125th Anniversary Archives exhibit and have been fascinated by the buildings, people, and objects that made Bethany such a great place.  So, the Sohlberg-Deere collection brings it even more to life for me.  I understand there are possibilities of the collection coming to Bethany on a permanent  bases – what a treasure that would be.  The students today have no idea what Bethany used to look like.  For them to be able to see and appreciate the history of Bethany through the photo collection would help make that connection for them.  This is exciting!  Let me know what I need to do to help make this a reality."***

In early 2006, the selection had been made of [58] pieces from the Gallery for the College by Mrs. Carson as expressed in this email:  "I do have a list of the photographs that Bethany would like to have in the frames for display on the campus that I will be sending soon..."****

However, the entire process came to a halt during some unexpected top level administration changes, especially with the departure of Ms. Humphrey.  A committee was formed and would not accept the chosen pieces due to an art policy of only accepting original art.  Since the photographs had to be enlarged to create a gallery, the committee would not accept them.  I was informed coldly that this policy had been waived in other cases, but it would not be for Lydia's Gallery pieces.

This decision was made by persons of authority, not having a true connection or understanding of the College and its early history.  Not having the 58 pieces hung on the walls of Bethany's buildings was a true cultural heritage loss for the College, especially for students, faculty, administration leaders, and board members having no knowledge of this history.

Ms. Humphrey had made all the right decisions concerning this matter.  She was a scholar of early Swedish and Norwegian immigrant history in Minnesota and very knowledgeable of Lindsborg and Bethany College early history. She would go on to become president of the Minnesota Historical Society and then president of the Norwegian-American Historical Association.  She had a true connection and understanding of the College and its early history and could easily make the right cultural heritage decisions for the College's best interests.

These persons were artists, writers, farmers, teachers, businessmen, town officials, a former mayor, an attorney, a librarian, college graduates, past and present college professors -- heads of their departments, the academic dean.