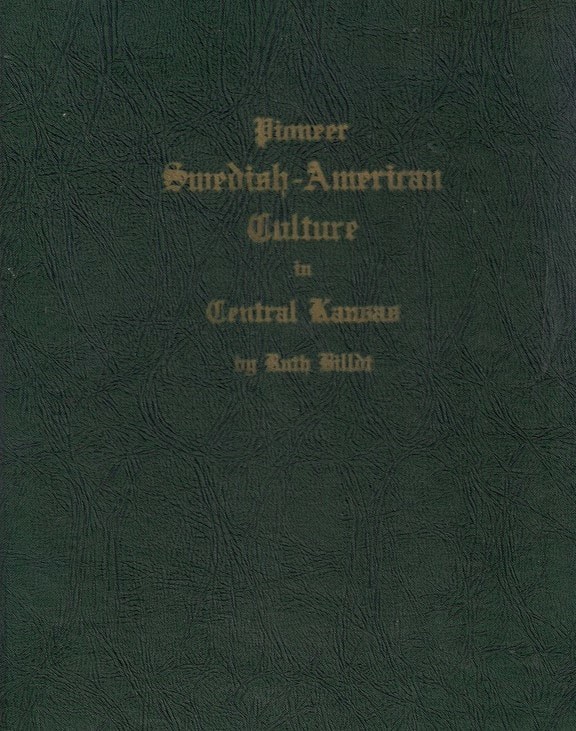 As this book does not have a "Table of Contents," a listing of all "Headings" within this volume with the corresponding page number has been created in a pdf file to facilitate research projects for those who are interested in sharing this most interesting local history with others.  The pdf file, "Table of Contents," is found just under "Headings."
'HEADINGS"

Download File
The PREFACE to this 1965 book was written by Emory Lindquist in 1964 as shown below:
More than half a century has passed since the publication in 1909 of Dr. Alfred Bergin’s excellent history of Lindsborg and the Smoky Valley written in the Swedish language, but the chronicle of events and the basic material which he presented continue to fascinate and inspire a new generation.  It is, therefore, singularly appropriate that this interesting volume should be made available in the English language.  Mrs. Ruth Billdt  a daughter of the author, has prepared this translation as a labor of love.  Many people will be greatly indebted to her for revealing to them personally the rich treasure that is found in the following pages.

The original volume of 350 pages of the printed word with almost 400 photographs and this translation record with sensitivity a series of events that had their origin in the religious, economic, and social life of Sweden in the middle years of the nineteenth century.  Discouragement with the prospects in Sweden and the promise of new opportunities in America brought a steady stream of Swedish emigrants to these shores whose numbers exceeded more than a million in a century. This volume describes the joys and sorrows, the success and failure, the aspiration and disappointment of those who came to the Smoky Valley and the heritage that was transmitted to their children and to their children’s children.  A later generation is indeed the grateful legatee of the energy, sacrifice, vision, and faith of the pioneer emigrants and their successors.

Dr. Bergin completed his research and writing exactly forty years after the crucial year 1869 when the Reverend Olof Olsson of Sunnemo arrived in the future Lindsborg community with a large part of emigrants form Värmland.  Dr. Bergin had already lived in Lindsborg and served as pastor of the Bethany Lutheran Church for almost five years prior to 1909 so that his identification with the pioneers was intimate.  This volume profits immensely from the fact that he was able to secure valuable information from some of the participants in the story which he recounted.  Moreover, the author brought to his assignment an inquiring mind and scholarly insight.  His scholarly work, “the Law of the West Goths” which served as his dissertation for the doctor of philosophy degree at the University of Minnesota, is additional evidence of his qualifications for writing a fine history of Lindsborg.

In addition to information received from interviews with the pioneers, the author made extensive use of documentary materials and written accounts by the emigrants and contemporary observers.  Fortunately, the scholarly training of Dr. Bergin caused him to cite extensively from these sources.  Included are liberal quotations from the minutes of The First Swedish Agricultural Company of McPherson County, Kansas, whose members promoted the settlement of Lindsborg, the minutes of the Bethany Lutheran Church and related organizations, and writings of contemporary observers like Ernst Skarstedt and Julius Lincoln.  Such material provided the rich source which must always be the principle reliance of the historian who seeks to describe accurate past events.  Although not generally documented, the materials are self-explanatory as to the source.

Although history is far more than biography and the achievement of individuals, the role of the personal element is always meaningful. This volume portrays clearly the assets of personal leadership whether it be that of Dr. Olof Olsson, the founder of the community, or Dr. Carl Swensson, the founder of Bethany College, or that of other individuals who in various positions made significant contributions to the life of the community.  But this historical account also provides unique resources in the portrayal of family histories, a continuing source of strength in community life.  Although the role of leadership is given appropriate attention and evaluation, this is in a real sense the history of the people.

Man lives not isolated as an individual nor exclusively in a family unit, but his life finds expression in relationships with a wide circle of friends and associates.  This volume portrays this sense of community in a gratifying manner.  Basic to the founding of Lindsborg was a land company, an interesting cooperative venture grounded firmly on evangelical Christian principles.  The religious life of the people was based on the deep evangelical tradition of the läsare movement which found expression in the organization of the Bethany Lutheran Church in August, 1869, shortly after the arrival of Pastor Olof Olsson in Kansas.  There were other manifestations of this sense of community, culminating in the founding of Bethany College in 1881.  A central them in Lindsborg’s history has been religious interest and commitment.  Although this volume, which was originally published under the auspices of the Bethany Lutheran Church, emphasizes the history of that congregation, the origin and growth of other churches and denominations is also recounted.

One of the subtitles of Dr. Bergin’s volume emphasizes the fact that he sought to portray cultural history, and broadly speaking, the goal has been achieved.  Included in an appropriate understand of culturing is the daily life of the people, the world of work and business as well as the institutions and efforts designed to promote religion, the arts, and that intimate sensitivity that in a more restricted sense is often related to culture.  This volume also presents distinctive achievements in this area.  Moreover, there was an interplay of other Swedish communities in Kansas with the settlement at Lindsborg, so this volume describes briefly the origin and development of those communities.

Although the distinct aspects of Lindsborg’s history are related to the achievement of the Swedish emigrants and their descendents, the pattern of constructive development was shared wholeheartedly by enthusiastic persons whose antecedents were not Swedish.  Many of them have made significant and abiding contributions to the life of the community as identified in the chronicle of events.

Forty years [1869-1909] of community living, thinking, and believing are recorded in the pages which follow.  These years constitute a precious prologue to a period which already exceeds it in length of years, and ahead are the challenging promises of more years and decades.  The foundation was laid with faith and devotion so that an abiding structure could be built upon it.  Another generation is now engaged in creating a pattern of life and destiny in the context of the past.  May this excellent volume be received in a spirit of gratitude and appreciation for a precious legacy and may it also serve as a point of departure for renewal of interest in and rededication to the faith and vision of the pioneers.
--------------------
​
The FOREWORD to this 1965 book of the 1909 book was written by Pastor Alfred Bergin as shown below:
(He signed it:  Lindsborg, Kansas; New Year’s Day, 1909; by Alfred Bergin)
When a strong, young Swede leaves his fatherland, he seldom plans to stay away forever.  Usually his plan is to better his financial stat and then return home.  But if he begins to build a home he soon finds himself bound to this new home because of the worry and hard work.  Children who are born here have another homeland than his, and he enjoys advantages such as he had never dreamed of in Sweden.  An odd thing happens: he feels at home in this new country, but at the same time he retains his love for his fatherland.

In the larger cities, our people disappear among the masses.  In the newly homesteaded rural areas there are so many different nationalities that, because of the natural Swedish aloofness and fear of ridicule, others become predominant, and the Swedish influence becomes hidden and pushed aside.  Therefore, in such places, it is difficult to get a picture or history of the Swedish people and their culture.

However, here and there are settlements that are almost exclusively settled by Swedish people.  One of these communities lies in the Smoky Hill River Valley in Kansas, with its center at Lindsborg.  It is our plan to describe the beginnings and development of this community of 12,000 Swedish people as realistically as possible.  We will try to present to the historians and other interested persons a true picture of the Swedish-American culture; to tell our brothers and sisters in our beloved homeland about our achievements in this new world.

But our main desire is to leave to our children and future generations the story of the hardships, courage, and strength of those who first settled here on this wild and wide prairie, and to present an honest picture of the preservation of our religious freedom and the building of our churches and schools, so that there may be continued respect and love for those things striven for and accomplished by their forefathers.

This type of work presents many questions.  For example: Is this ground, secured through hard labor as truly Swedish as that inherited or acquired through bloodshed and the sword?  Perhaps such an account as this is almost as important as that of an explorer who realizes that he is dying in a strange land.  Hastily, he writes about his experiences in the hope that they may benefit others who will follow in days to come.  Would it have been more beneficial to the people and the nation if Sweden would never have suffered the depletion of manpower that establish Swedish America? Or has God a great plan by which Swedish America shall be the rescuing angel to encourage a renewed energy in an apathetic and exhausted race of Northmen, and to inspire a new vitality, which will once again place Sweden among the foremost nations of the world?  The future holds the answer.

Material for this book has been gathered from word-of-month information, reports of the land companies, records in the churches and education institutions, the Kansas Historical Society’s “History of Kansas,” “The Santa Fe Trail” by Col. Ingman, “History of Kansas Synod” by Ott, Conference and Synod records, as well as old and more recent letters.  It stands to reason that much color has been excluded because the people involved are still with us.

We have used words that may sound odd to the people in Sweden so that we may be understood by the Swedish Americans.  It is not our intentions to place a bouquet of flowers in the reader’s hands, but to portray a true picture of the Swedish culture in central America.

Articles contributed by others have been properly recognized, the author’s name having been placed at the end of each article.

This work was authorized by a decision of the Bethany Congregation at its annual meeting in January, 1908, “. . . that the church board is authorized to have a book printed concerning the history of the Lindsborg settlement for its fortieth anniversary:  The Church board later decided that “. . . the pastor alone be responsible for this publication, but may ask anyone for help.”
--------------------
​
For his daughter's, Mrs. Billdt's, ACKNOWLEDGEMENTS of Lindsborg community residents help to her, click below: 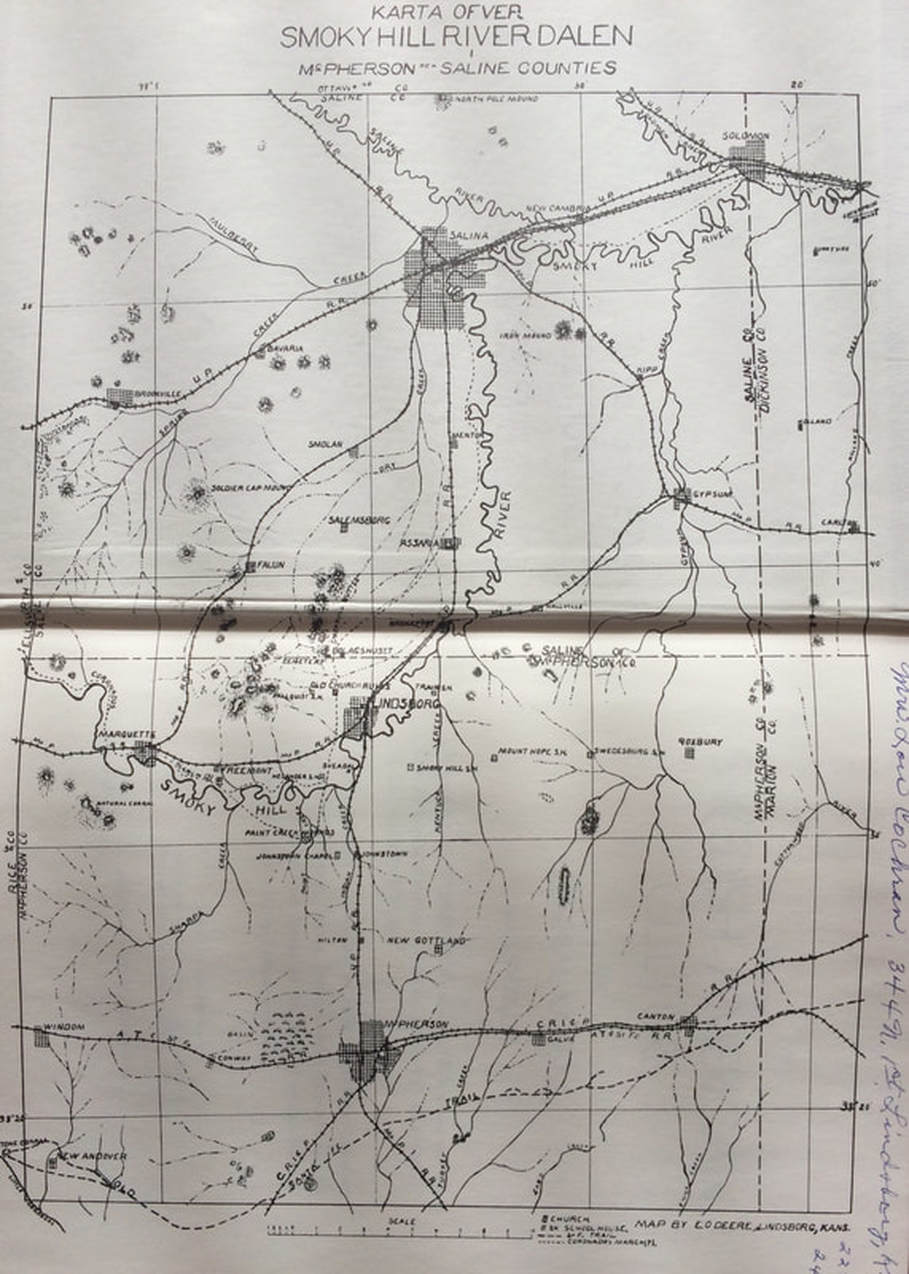 Note:  Map source by Dr. Emil O. Deere is shown above on the Saline County map lower right corner.  The entire map is found on the last page and back cover.
Go HERE, to learn about this 1969 book, "The Smoky Valley in The After Years," (translated from the 1919 ​" Lindsborg Efter Femtio Ӓr.")
*     *     *
Swedes: TheWayTheyWere
~ restoring lost local histories ~
reconnecting past to present
*     *     *
All color photography throughout Swedes: The Way They Were is by Fran Cochran unless otherwise indicated.
Copyright © since October 8, 2015 to Current Year
as indicated on main menu sections of
www.swedesthewaytheywere.org.  All rights reserved.