"The Other Swedes"
​~ Honoring Them and Remembering Them ~ The Smoky Valley Writers ~
Rev. Bror Carlsson
(of Sweden)
(1901-1967)
~ Tracing Värmland's Rev. Olof Olsson's church life in Sweden
and in
​Swedish America with the Augustana Lutheran Synod

It is quite sad that Rev. Bror Carlsson's finished 350-page manuscript in Swedish of November 4, 1955, on Rev. Dr. Olof Olsson (1841-1900), spiritual founder of Lindsborg and on the Swedish Lutheran Augustana Synod never made it to a publishing house.   The title of the manuscript was Jag sökte icke mitt translated, I Did Not Seek My Own.

Decades later his son Mr. Alf Brorson saw to it that it would be translated from Swedish to English by the Rev. Martin Ringstrom (1908-2009) an Augustana Theological Seminary graduate who retired in Lindsborg with his wife Louise Segerhammar.  Rev. Ringstrom's translation made the way for Mr. Brorson to publish a very condensed version of I Did Not Seek My Own in 2001 with the English titled He Gave God Glory " "The Story of Olof Olsson."

Here are the words of how this began by his son Alf Brorson in the Foreword regarding his father's determination to tell the story of this remarkable humble servant of the Lord, Rev. Dr. Olsson, Swedish leader, who brought his flock of Värmland Swedes to the Kansas Smoky Valley to establish the Swedish Lutheran Bethany Church in Lindsborg in 1869, with its support and direction coming directly from members of the Swedish Augustana Lutheran Synod, founded in 1860.
"He Gave God Glory " "The Story of Olof Olsson"

"My father, Bror Carlsson, was a pastor of the Church of Sweden.  At the time of his death he left a manuscript dedicated to "the Augustana Evangelical Lutheran Church with Gradtitude and Respect."  The manuscript entitled I Did Not Seek My Own contains 350 pages of typewritten material and deals with "The Augustana Evangelical Lutheran Church in the U.S. A. during the years 1860-1900 with particular attention to a Värmland native, the pioneer pastor, Olof Olsson."

"He could have been my father.

​
Jag sökte icke mitt
​translated
I Did Not Seek My Own
finished
November 4, 1955 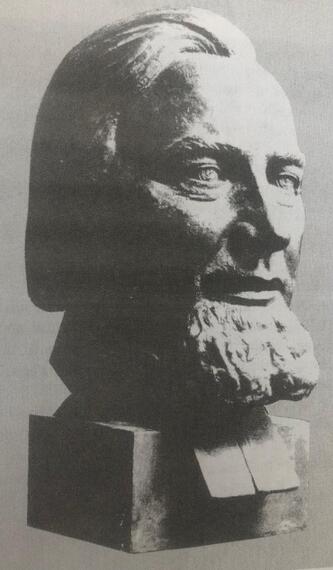