​<>  The Legacy "Messiah" Performances  <>
"In Lindsborg, the Messiah is religion...a conviction of truth... high purpose … that lifts... resounds in  'Hallelujahs.' " - New York Times, 1939*
It is the Oberammergau of the Plains ...Its Messiah festival is called by critics "the finest of its kind in the world" - Reader's Digest April 1944 *
​Swensson's Musicians' and Singers' Messiah,1882 on …
Alma Swensson, ​Hagbard Brase, Samuel Thorstenberg, Thure Jaderborg, Oscar Thorsen,  Oscar Lofgren . . .

Due to Swedish American Bethany College founder and second president Dr. Rev. Carl Aaron Swensson's and his wife Alma Christina Lind Swensson's love for music, and, especially, the Messiah, with a growing chorus  which would one day exceed 500 singers, the wheels were set in motion for little Swedish Lindsborg and Bethany College to become worldwide known to highbrow musical circles and societies due to the excellent Swedish and Swedish American professors of the Bethany College Music Department, most notably Alma Swensson, ​Hagbard Brase, Samuel Thorstenberg, Thure Jaderborg, Oscar Thorsen and their "first dean" of the College of Fine Arts, professor Oscar Lofgren, a position he filled from 1918 to 1948.
​However, Pastor Olof Olsson, the founder of Lindsborg and Bethany Church, first brought sacred music to the great plains of Kansas to this community in 1869.  Swedish American author Karen A. Humphrey's in her 2012 Grace, Faith and the Power of Singing -- The Alma Christina Lind Swensson Story, on pages 24-26, eloquently describes this so well:

"And all during the autumn, on this flat prairie valley, a sanctuary was built by the hands of volunteers.  They located the church on a slight rise in the landscape near the center of Section 7.  The walls were dark ochre sandstone, brought by horse-drawn wagons from nearby bluffs.  Blocks of sod were cut and stacked on the gable ends.  The roof was made of slough grass, laced to the structural poles.  On each side, three small windows allowed some light.  There was a dirt floor, no ceiling; rough-hewn planks propped up on cottonwood tree stumps served as pews.  The altar, a table made by immigrant Olof Erickson, was placed so that the congregation faced east.  The humble prairie sanctuary was thirty-six by thirty-four feet, and it was ready for Julotta, Christmas Day, 1869.  But a roaring prairie blizzard kept everyone at home.

"In a week's time the prairie was quiet again, and the congregation came to their church for the first worship service on New Year's Day, 1870.  Pastor Olsson led the choir as it sang out across the valley of the Smoky Hill River.  Their anthem was "Stäm in i änglers chor" (Join in the angel's choir).  The melody and harmony are to the tune "Thesaurus Musicus," London 1744, known to generations of Americans as "My County 'tis of Thee." A choir had begun the new year, and the settlers at Lindborg began a love affair with choral singing."

Mrs. Humphrey's book of 2012, gives a comprehensive clarity on this Swedish American Lutheran woman of faith, strength, integrity and graciousness, who, for a season, through her gifts of music and hospitality brought worldwide musical attention to a little Swedish town located on the Great Plains of Kansas!  To learn more about the book on Mrs. Swensson, click on her portrait below. 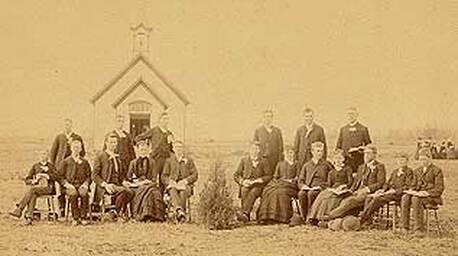 From fourth Swedish American Bethany College President Emory Lindquist in his 1975 book, Bethany in Kansas, a history of a college, on page 39, we read about Swensson's lovely wife, Alma -- touching on a significant role she played in the creation of the Messiah performances:

"The great career of Carl Swensson was shared and supported by his wife, Alma.  She came as his young bride to Lindsborg in September 1880, from Moline, Illinois.  She was a talented singer and organist.  The Swenssons planned together the presentations of the Messiah and Alma served as the conductor in rehearsals the first year, and at the renditions she was a soloist.

"Alma Swensson had an outstanding record in women’s work within the Augustana Lutheran Church.  Its national Women’s Missionary Society was organized in her home in June, 1892, and she served as the recording secretary.  She was the first and long-time editor of the official periodical of the Society.  Mrs. Swensson taught music in the early years of the College and served as organist of the Bethany Lutheran Church for forty (40) years.  She was a member of the Oratorio Society Chorus [for 55 years] until two years before her death."
- Alma Christina Lind Swensson -
1859 - 1939 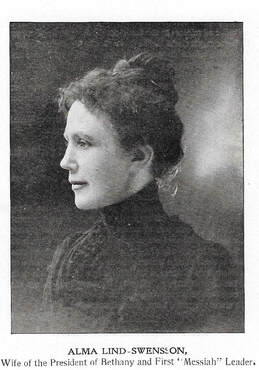 Source: Forget-Me-Not, The Annual of Bethany College, 1902, page 96.
*   *   *
And, to follow this incredible "sacred musical story" found in this rural Main Street Swedish American town, click on Their ﻿Bethany College Handel's Messiah Performances﻿; then, on  Messiah Performers, Venues, Press, Broadcasts & Audiences; and finally on "Messiah" Auditorium, Ling Auditorium, Auditorium, Ling Gymnasium.
*   *   *
​*Source: Emory Lindquist's Bethany in Kansas, the history of a college, page 168.
*     *     *
Swedes: TheWayTheyWere
~ restoring lost local histories ~
reconnecting past to present
*     *     *
All color photography throughout Swedes: The Way They Were is by Fran Cochran unless otherwise indicated.
Copyright © since October 8, 2015 to Current Year
as indicated on main menu sections of
www.swedesthewaytheywere.org.  All rights reserved.