Scientist Emil O. Deere
​​<>  Remembering the Bethany College Legacy Museum & Swedish Curators  <>
“After the move ..., you will find one of the finest museums of this kind in the mid-west...” -- County Museum Director Tib Anderson. -- 1966 *
5,000 Bethany College Museum items were added to the 500 McPherson County Old Mill Museum items in 1966**
The 1966 Bethany College Museum Collections Move to the Old Mill Museum
~ Dr. Leon Lungstrom's Role
​
As of August 1, 2021,
there is a new owner of these College collections,
the "Natural History" one including the large taxidermy collection
was placed in storage,
per Executive Director, November 18, 2021*

The final chapter for this fine museum would come with the College plan to raze its Old Main home in 1968 for the building of the new Wallerstedt Learning Center.  In the Museum's eighty-two (82) years of college history, Dr. Emil O. Deere would be its last curator, and, by his side, Swedish American professor of biology Dr. Leon Lungstrom would be destined to play a major role in the disbursement of its collections, and, thus, transferring his service to them at their new home, the McPherson County Old Mill Museum.  Add to that, Lungstrom would become the sole, unofficial, first and last historian of the Bethany College Museum.

This college museum was first referred to as the Natural History Museum until 1926 when the local Swedish history and pioneer collections were added by college board approval. (Source:  Mrs. Elizabeth Jaderborg, 1967 Living in Lindsborg and Other Possibilities, reports about this in her chapter "The Olsson Trail," page 18.)
​
[For those who do not understand what a "Natural History Museum" is,
​ go HERE to the Smithsonian's National Musuem of Natural History]
- The New Location for Bethany College Museum Collections -
- McPherson County Old Mill Museum -
- Overlooking the Smoky River - 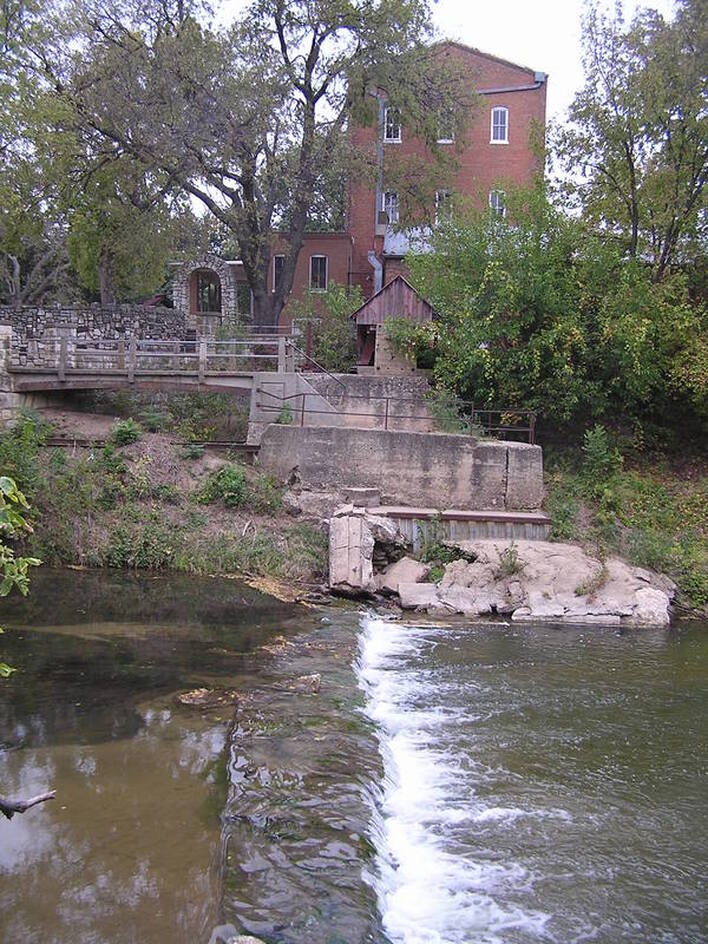 Deere would not live to see his planned summer move take place, for he died in January of 1966.  Thus, this responsibility would fall to the ones closest to Deere, science college professors former student and protege, Dr. Leon Lungstrom,  and the professors in charge of the inventory list, Dr. Glenn Bellah and Carl Swenson.
After the move, ten years later,  in September 1976, a "glowing report," was found in Wichita's Antique & Collectors Mart, by Lindsborg's Betty Hanson, on the popularity of the County Museum which reads as follows:

"The museum began as a small collection housed on the first floor of the Smoky Valley Roller Mill.  The present rustic building, built in 1968, now houses 11,000 items in realistic displays.  In addition to local private donations of family heirlooms, the museum has received the 300 item Udden Indian Collection, the 900 item Emil O. Deere Pioneer Collection, and the Bethany College Natural History Collection [which included the "large taxidermy collection], giving a record of the untamed — present and prehistoric.  Besides the pioneer rooms: parlor, dining room, kitchen, post office, and general store one can view a collection of over 200 pieces of Barbwire, quilt blocks, and other handicrafts, a children's toy display, a Svensk Stuga (cottage) with authentic Swedish costumes on mannequins, and other fascinating relics."

We learned that the College's initial collection of 5,000 items given to the McPherson County Old Mill Museum in 1966  had since then been added to totaling at that time to some 20,000 items.
​
Here we saw the taxidermy and fossil collections as well as the pioneer collections.  The mounts were the same as I had seen them in 1999, like fresh from the College move in 1966.

​We were then also given the rare opportunity to go into Bethany College's "first" building, the "Bethany Academy" of 1882, historically Lindsborg's "first" schoolhouse of 1879.  It was closed to the public but opened to us.  It was wonderful to see some of the earliest Swedish College memorabilia and artifacts.

(Photographs of November 1, 1999)
As of August 1, 2021,
there is a new owner of these College collections,
the "Natural History" one including the large taxidermy collection
was placed in storage,
per Executive Director, November 18, 2021*​
These early taxidermy exhibits were created by professor Dr. Deere and his students, most all from the classroom in Old Main which was Deere's for over four (4) decades.  Here he is, as shown below, with some of those same exhibits shown above in the McPherson County Museum, preparing them with his students.
- Deere's Old Main Classroom Taxidermy Class - 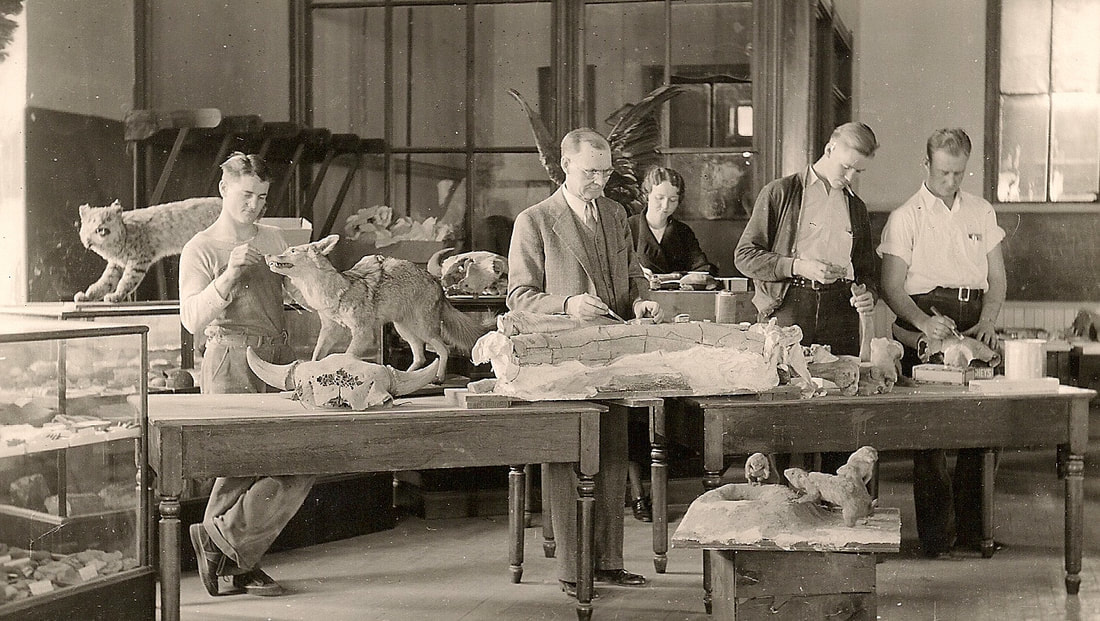 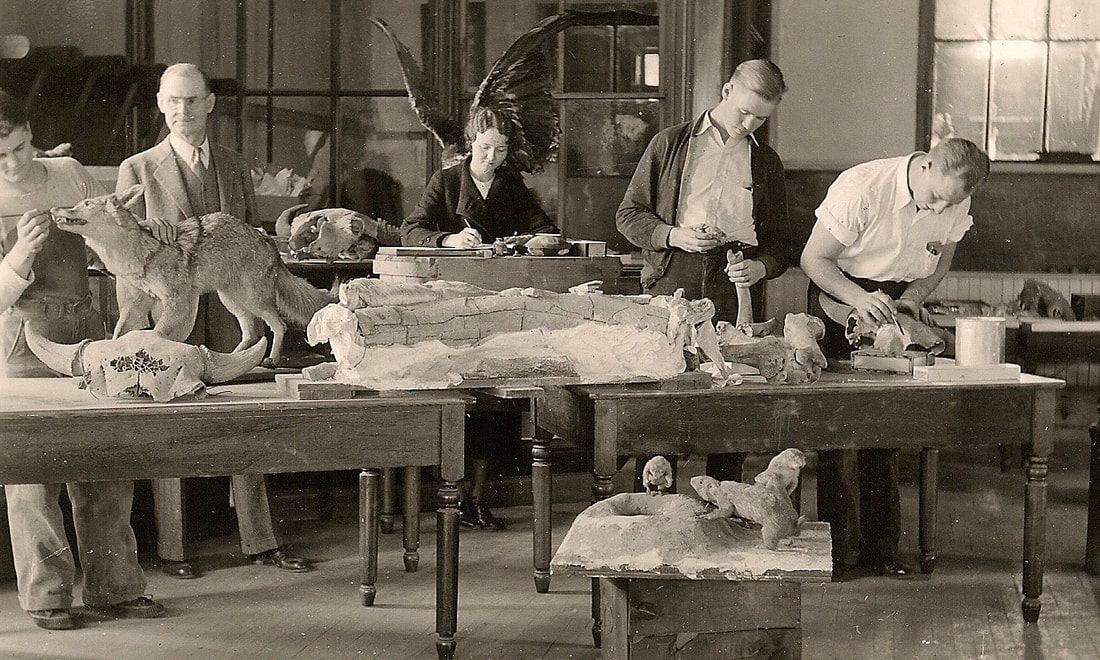 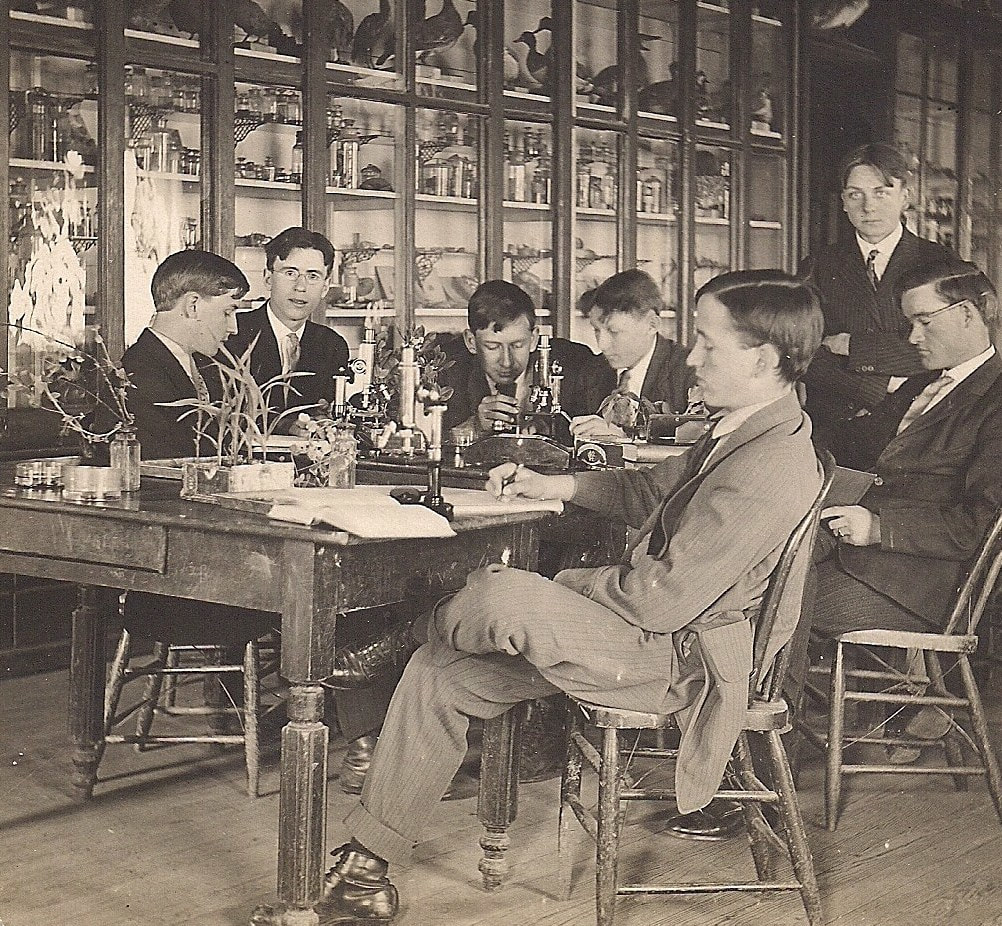