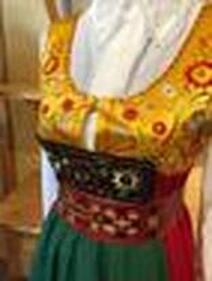 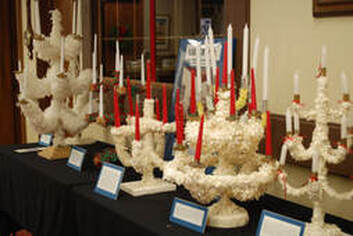 ​ - their Legacy Listing through their -
​​~ Swedish culture sustainability endeavors ~

Courtesy of Lindsborg Convention & Visitors Bureau
Mark and Mardel Esping of the Swedish-American Folklife Institute of Central Kansas continue to collect used costumes of past Svensk Hyllningsfest celebrations that are passed on to Mrs. Marla Elmquist and the Hyllningsfest Costumes Ladies who restore and preserve them.
​

She is a charter board member of the Kansas Alliance of Weavers and Spinners; and she was a key player in the establishment of the Smoky Valley Fiber Guild.
​
Swedes in Folk Art Metal Work -- Specialty:  Swedish Wedding Crown
Malcolm Esping -- (1914 - 1989)

He was an incredibly gifted artist especially in this artform.
He was very celebrated for his Swedish wedding crown designs.​

For the SWEDES story on it, go HERE.