Beginning in the middle of page 137 are the words of Dr. Lindquist:

"The immigrant experience was intimately related to the language question.  In the early stages, among the Swedes who often settled in colonies or join communities, especially rural communities, the Swedish language was understandably dominant. The language problem became more acute with the passing of time, and the entry of the immigrants' children into public schools accentuated the issue since English became their language. Adults adapted to the language of the land in varied degrees depending upon a number of circumstances.

Malm soon recognized that right reason led to the conclusion that the English language would inevitably prevail in the future.  In the early 1900s, he became personally involved in a situation that was really a microcosm of the macrocosm of this language problem.
​
Events associated with organization of the Messiah Lutheran Church, Lindsborg, in which the English language was used exclusively, provide a good illustration of the situation described immediately above.  The role of G. N. Malm in the organization of this church in 1908 furnishes an interesting insight into his understanding of modern trends and his view of the controversial problems related to the use of the English or Swedish language in a changing world.

Background factors indicate clearly the devotion of Malm to the Bethany church. He had served in 1903 to 1905 as secretary of the building committee which provided the leadership for the major renovation of this historic church edifice. His five-page report to the congregation described fundamental changes which included a large transcept  north and south, new stained glass windows throughout the old and new sections, a new altar and three large altar paintings. Malm had designed the new altar which the Palmquist Construction Company had included in there contract of this major renovation. The central altar painting, Christ at Bethany, was created by Malm and the two large paintings, one on each side, were painted by Birger Sandzén.  Other renovations included new flooring and a new heating system. Malm's report described in detail the action of the committee in thirty-five meetings.

The above developments in which Malm had played a leading role shows his commitment to the church. It is quite obvious therefore that the importance of the language question loomed so large in his thinking that failure to solve it adequately caused him to be a leader of the group which withdrew from the mother church to organize the Messiah Lutheran Church.

​This development was discussed by mom in considerable detail in an article written about 1920. In the early 1900s the almost exclusive use of Swedish in the Bethany Lutheran Church created problems. Children were beginning to depend upon English because of their public school experience. Leaders in the community like G. E. Eberhart and A. A. Abercrombie, associated with the college and later in the banking business, were not Swedish and several of the wives of Lindsborg citizens did not speak Swedish. Dr. Swensson had arrange for occasional English services at the church and at the college where a substantial number of faculty and students did not understand Swedish. However, with Swensson's death in 1904, Malm contended that the problem became more acute because his successor, Dr. Alfred Bergin, who was not well versed in English at that time, did not respond adequately to the needs according to some members of the community.

At the annual meeting of the Bethany Lutheran Church in 1905, a committee consisting of members of the church, including Malm, advocated that English services should be included every month.  This met apparently with a negative response and some persons felt that the English language had no real place in the life of the church except in occasional services.  Malm contended that greater understanding by the leadership and council of the church would have resulted in increased access to religious services in the language of the land and might have avoided the formation of an English-speaking Lutheran congregation. Malm summed up the situation as follows: "No doubt if the first committee in 1905 had been received with a favorable attitude from the congregation, matters could have been arranged to the satisfaction and to the prophet of all concerned."  He believed that if an assistant pastor, fully capable of leading English services could have been engaged, unity could have been maintained without the division that resulted in two congregations.  The unified approach would have meant much to the church and community.  Malm heartily supported the slogan which the new church adopted, namely "The faith of our fathers in the language of our children."  He observed that circumstances warranted the developments that occurred.  Children in the Sunday School could now receive instruction in language which they understood instead of memorizing in Swedish verses and explanation of Luther's Catechism, which they could recite but which they did not fully understand. 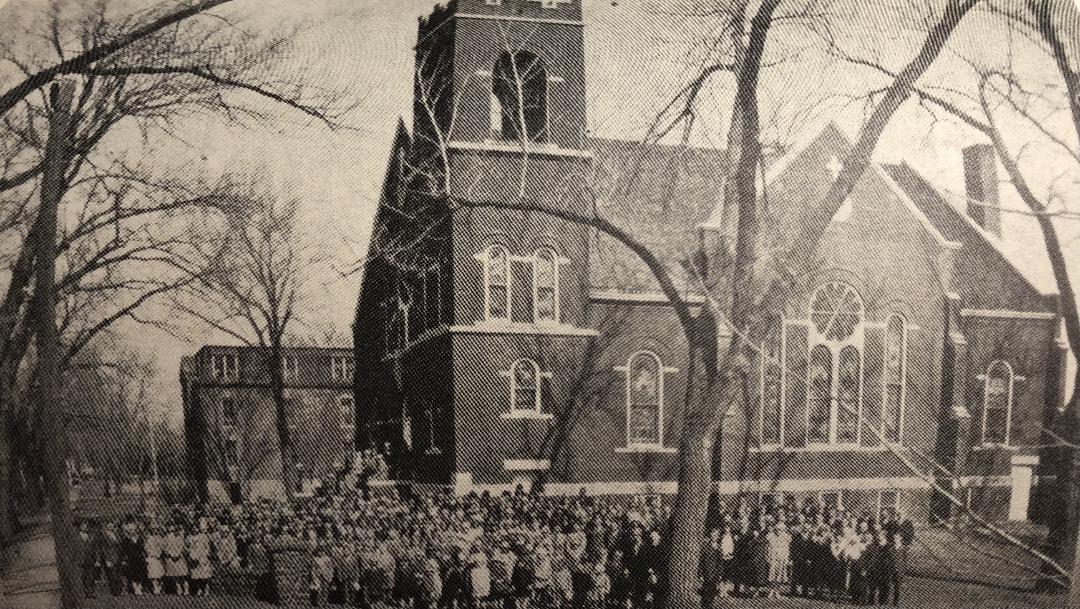 Source: "G.N. Malm -- A Man of Varied Interest" by Dr. Emory Lindquist. Photographer was B. G. Grondal.
*   *   *
Swedes: TheWayTheyWere
~ restoring lost local histories ~
reconnecting past to present
*     *     *
All color photography throughout Swedes: The Way They Were is by Fran Cochran unless otherwise indicated.
Copyright © since October 8, 2015 to Current Year
as indicated on main menu sections of
www.swedesthewaytheywere.org.  All rights reserved.