Like his Bethany College Swedish art professor Sven Birger Sandzén, Oscar Brousse Jacobson would embrace a career in art and passion for teaching, fostering a great appreciation of art with his students at the University of Oklahoma in Norman.  Here, there were many Native American artists attending his classes.   Befriending and specifically mentoring them, Jacobson is most noted for the establishment of the internationally known "Kiowa Five Painters" who traveled to Prague, Czechoslovakia in the 1920s with an exhibition of their paintings, from which a catalogue of their work was created in France.

Due to his tireless and timeless dedication to Indian art, a Native American art movement began and the Jacobson House Native Art Center was eventually established as a result.  Also envisioned by Jacobson was a permanent facility to house art which was realized later with the building of the Fred Jones Jr. Museum of Art on the campus of the University of Oklahoma.
- The Jacobson -
​"Children and the Sea"
1910
​Gifted to the Sandzén Memorial Art Gallery, 2019, in time for the "Art for All - The Swedish Experience in Mid-America" 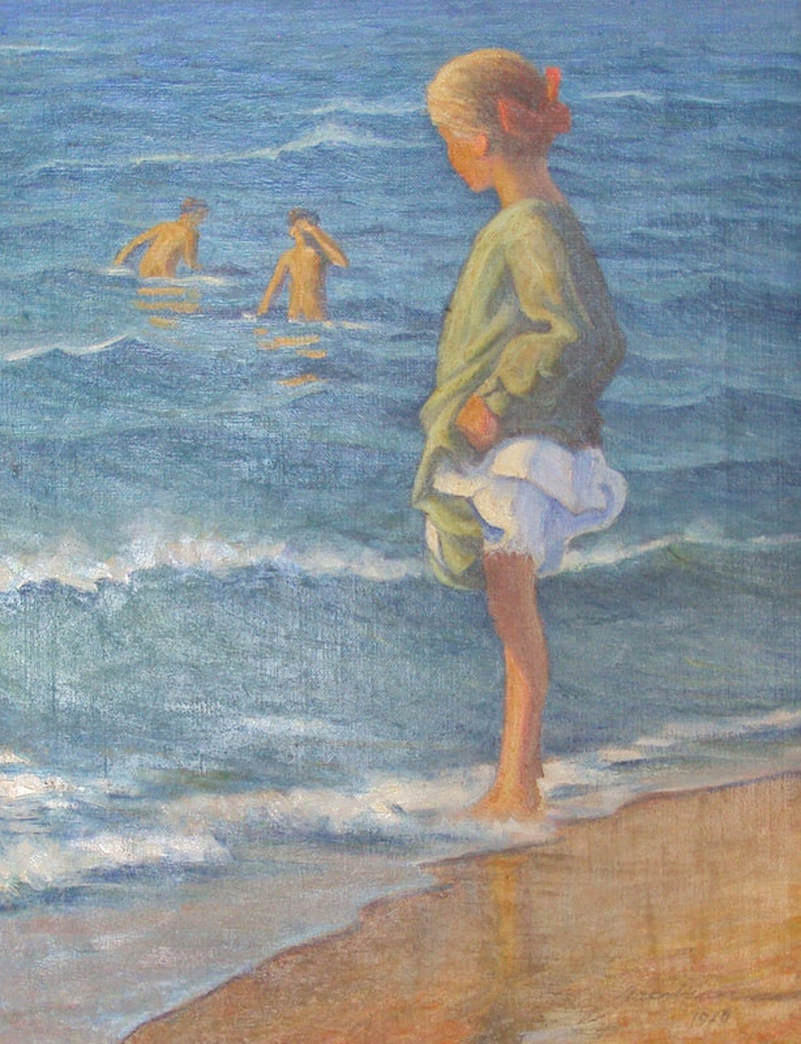 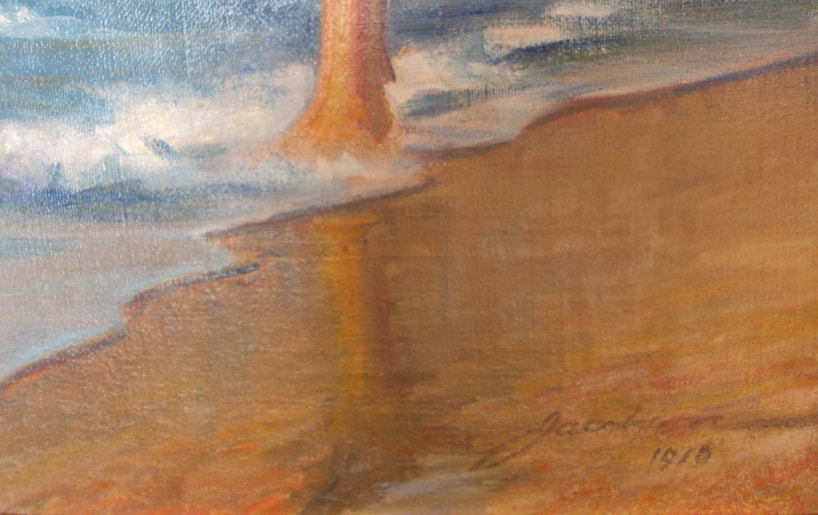 Jacobson was born in Västervik, Kalmar Län, Sweden in 1882. At the age of eight years, his family emigrated to America journeying to their new home in Lindsborg, Kansas, in 1890.  After graduating from Bethany College in 1908, Jacobson continued his art studies at the Louvre in Paris, and  traveled on to Sweden and Denmark to further study art.  He would receive a Master of Fine Arts Degree from Yale University in 1916, a year after having become the director of the School of Art at the University of Oklahoma.  Twenty-five (25) years later would find Jacobson back at Bethany studying with Sandzén again, this time he would receive a Doctorate in Fine Arts.

Upon visiting with persons at the Jacobson House Native Art Center and the Fred Jones Jr. Museum of Art in Norman, Oklahoma, in 2014, I learned that this particular painting is one of his oldest, and its style is rare, for it was painted before Jacobson had developed his own style, which was to be a "flat style," so very different from this painting.

The painting was finished in 1910, and its style more than likely was developed as a result of Jacobson's exposure to a combination of French, Swedish, and Danish art when he studied abroad.  Was it painted in one of those countries overseas or in the States?  One can only guess.  Jacobson was twenty-eight years old when he finished it.

It is unclear precisely how Lydia came by this painting from Jacobson.  But their paths must have crossed at Bethany College around 1907 when she began her new job at Lane Hart Hall as the Lady Principal and Matron of the ladies while Jacobson was in his last two years of college there, where he had been studying art under Sandzén from approximately 1904 and would finish in 1908.

In 1984, when the rest of Lydia's and Emil's estate moved to San Francisco, this beautiful painting was discovered frameless and in a deplorable condition making many feel, I am sure, it was ready for the trash, but it was not!  Twenty years later, with the Hallberg paintings, it was restored and preserved to almost new condition. 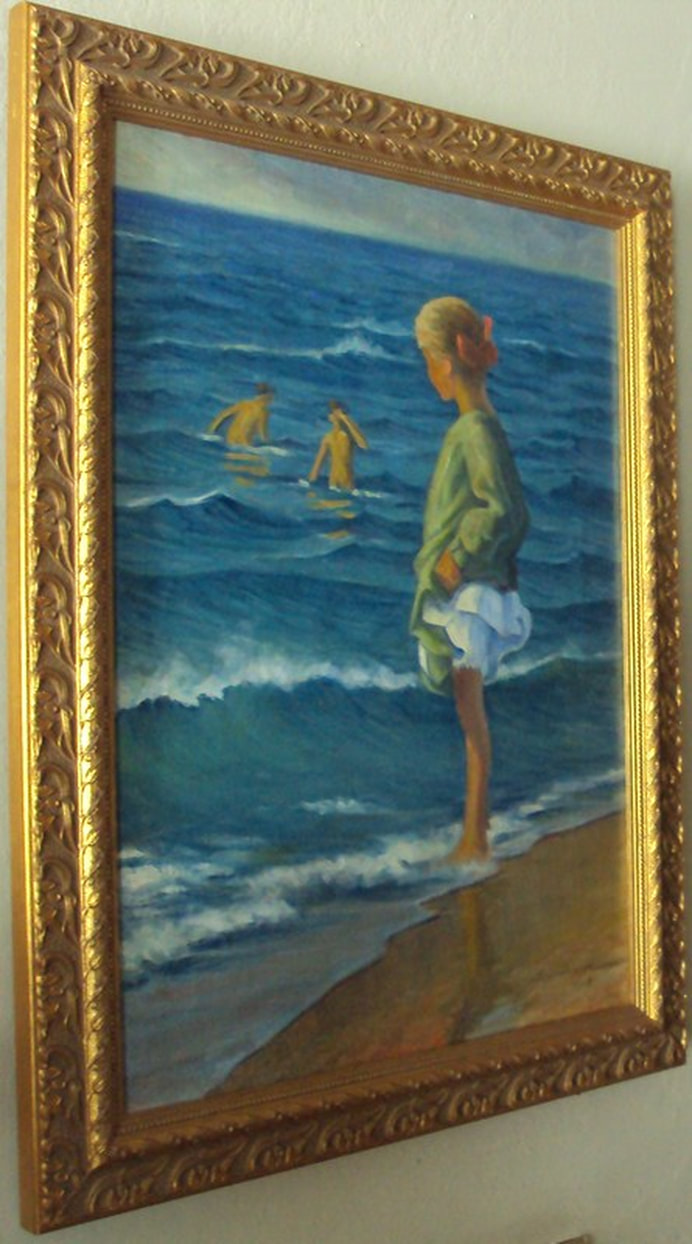 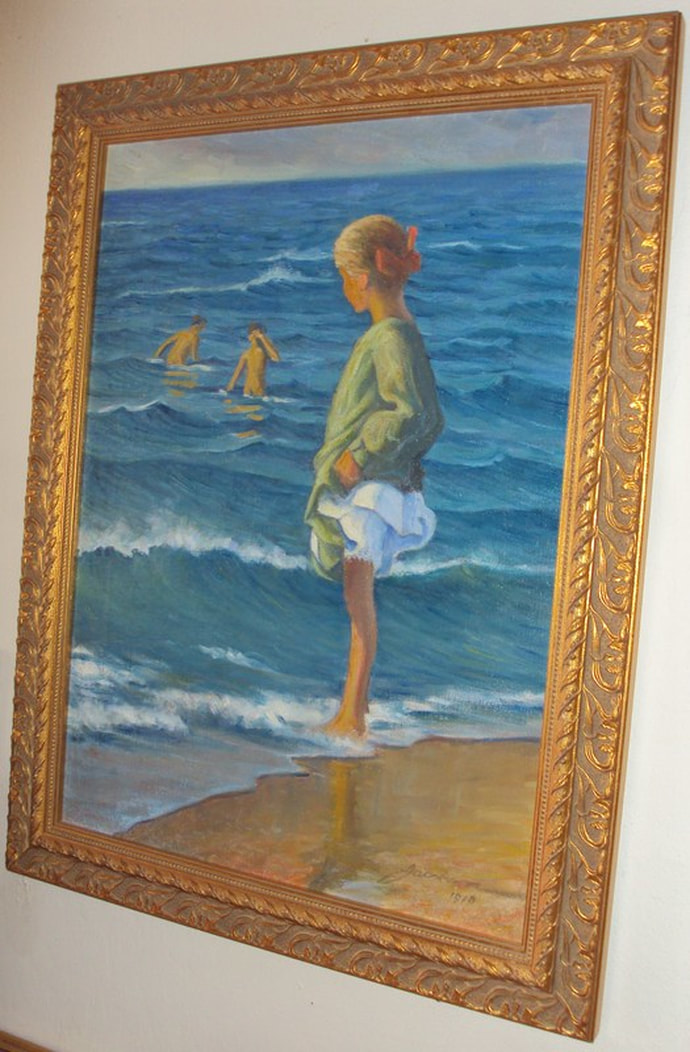 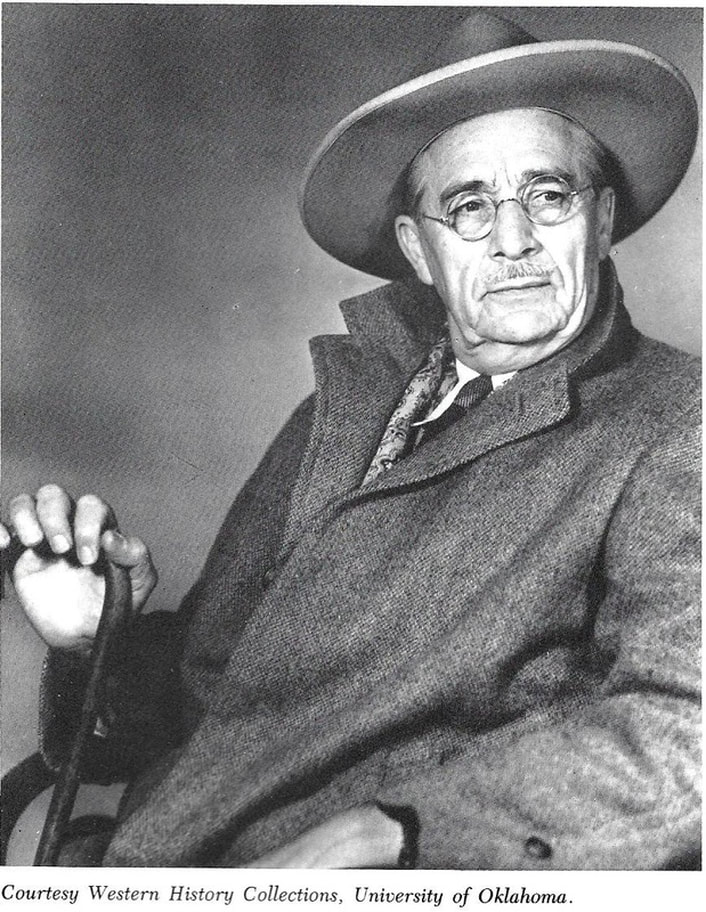 Sources:  Wikipedia and brochures on Jacobson House and the Fred Jones Jr. Museum of Art, the Mary Towley Swanson 2004: A Tangled Web: Swedish Immigrant Artists’ Patronage Systems, 1880-1940, and interview visits 2014.
*     *     *
Swedes: TheWayTheyWere
~ restoring lost local histories ~
reconnecting past to present
*     *     *
All color photography throughout Swedes: The Way They Were is by Fran Cochran unless otherwise indicated.
Copyright © since October 8, 2015 to Current Year
as indicated on main menu sections of
www.swedesthewaytheywere.org.  All rights reserved.