​"He is the poet-painter of immense sun-washed spaces, of pine-crowned, luminous, gigantic rocks,
and of coloring–shifting desert sands. . . .The dreamer–painter is truly a master."
-- ​Giuseppe Pellettieri, an European art critic
-- Lindquist's Birger Sandzén, An Illustrated Biography

Whatever Sandzén exhibited in 1922 at the Babcock Gallery in New York City can be discovered today in the archives of the Birger Sandzén Memorial Gallery, honoring his work in Lindsborg, Kansas.  What he would have chosen would have been from his paintings, water colors and drawings, completed before this exhibition, some perhaps which still may be in the gallery.  Some of his oils can be found HERE dating his works of "the early" and "the middle" years; his water colors, HERE; and his drawings HERE.  Below is an example of a painting that could have been used during this exhibit.
​Smoky River
1919
oil on board
Courtesy of the Birger Sandzén Memorial Gallery 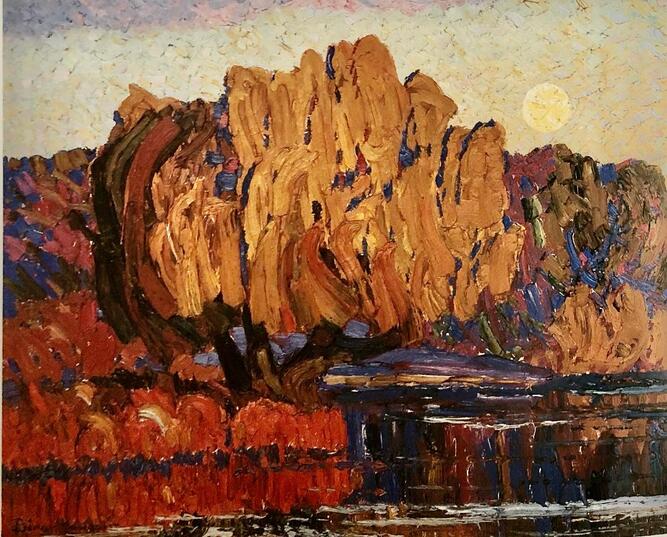 I was so impressed by Sandzén's reputation as a serious artist in the "art world of America" in the early 20th Century, and was taken so by the art reviews of his exhibition at the New York City Babcock Gallery (the City's oldest art gallery, established in 1854*) that I had to add this section, just to share some of the reviews he was given during that time, as described by fourth Swedish American Bethany College president Dr. Emory Lindquist in his 1993 book, Birger Sandzén, An Illustrated Biography.  He writes on pages 82 - 84 the following:

"In 1922 a one-man show was held at the Babcock Gallery in New York from January 30 to February 11. The exhibition included 31 oil paintings, 20 water colors and 40 lithographs under the sponsorship of the American Scandinavian Foundation. Two people were mainly responsible for promoting this important event – Henry Goddard Leach, a longtime leader of the foundation and editor of Forum, and Christian Brinton, art critic and author. Brinton had seen some of Sandzén's work in the National Academy of Design in New York the previous year and had been greatly impressed, and he consulted Leach and William Henry Fox, director of the Brooklyn Museum, about the possibility of having a one-man show in New York. Sandzén was known to Fox through some of his paintings that had been exhibited in the Brooklyn Museum, but the first plan, to present the Sandzén exhibition at that museum, did not materialize.  C. Babcock, however, owner of an art gallery, had seen a Sandzén painting owned by Ernest Davis, a Bethany College graduate and a well-known professional singer in New York, and had been enthusiastic about it. When Brinton approached Babcock about sponsoring a Sandzén exhibition, Babcock immediately consented, waiving the normal $600 fee.  Leach provided $500 for a catalog, which Brinton agreed to write.

"The Babcock exhibition received both praise and criticism, but with far more of the former. Henry McBride in the New York Herald observed:

'Those who have encountered chance paintings of Birger Sandzén in the exhibitions will have a higher opinion of the artist after a visit to his show in the Babcock Galleries. … He paints with fiery, tempestuous colors quite unlike any native who has gone west to paint. As a rule the glare of the light in the Sierras and among the Rockies makes them blink, and they mix so much white into their color to get the light that by the time they get back East they give the impression that there is no color at all in the West. But Mr. Sandzén is different. He says there is more color than light. He defies the Grand Canyon to do its worst, knowing that he has more vermilion in his color box than nature can afford to spend upon sunsets….It is all very vehement, splendid and very western.'

"A reviewer in American Art News wrote, 'Reports coming from the Middle West that Sandzén was an artist of real magnitude are more than justified by the first comprehensive exhibition of his work shown at the Babcock Galleries. To those who know Sandzén only through an occasional canvas, a surprise is in store. His work in watercolor, wood cuts, and lithographs…makes him stand out as a bigger and more rounded personality than every report made him.”  Peyton Boswell wrote in the New York American, 'Since Kansas, Colorado, New Mexico and California are the source of Sandzén’s landscape, it is only natural that they should be big and broad and abounding in color. But he surpasses all expectations of what such landscapes should be by the vigor of his technique, the rightness of his compositions, and the gorgeousness of his color schemes that burn as brightly as the face of those many-hued lands.'  Boswell was especially impressed with the canvas Wild Horse Creek (also known as Creek at Moonrise [see Plate 21], which held all those elements in full. 'However, Sandzén was not averse to portraying less dramatic features of the West as was evident in Moonlight, painted at Santa Fe in 1919. In The Old Homestead (1921) [see Plate 24], the painter has caught the melancholy atmosphere of the place.”

"Lula Merrick observed in her review that “like Cezanne, he [Sandzén] has searched for 'significant form' disregarding details and extreme realism, but with direct brushwork and a love of brilliant color has adapted nature to express artistic emotion.”  She liked especially the canvas Afterglow, painted at Manitou, Colorado, which was “brilliant, almost dazzling, with powerful trees and verdure of varied tones. . . The observer will find sentiment and poetry enveloped in the great masses of pigment. . . .  In the Black Canyon [1920] [Plate 18] is more convincing of the vastness, scintilant color and giant forms that one usually encounters in renditions of this subject because he has lived the rugged life of the locale, and has studied it in every phase. Two Cedars, [1919] shows decided simplification of design.

"The Babcock Gallery exhibition of 1922 attracted critics from cities other than New York, and the Boston art critic of the Christian Science Monitor was favorably impressed expressing his response in interesting language:

" [Sandzén's] pictorial array has startled New York like the banners of his ancestral Vikings.  If anyone else has had such massive vision of the scenic West, it has remained cloistered, like Sandzén's until now. Others have taken in wide horizons and have visualized mountains and plain with more or less force. Sandzén focused his powers on individual rocks, a clump of Cedars, a snowbound approach [See Plate 31], a bend in a torrential creek, with far greater effect.

"Sandzén so touches the imagination with isolated items that held him as to rouse in the beholder something of the art that must have beset him in his wanderings. . . . Here without mistake is the wild Nordic impulse, transplanted and recharged with the old vigor in the atmosphere of western America. It has brought a breeze from the West that has not been filled here before. . . . There is no actual sweep I’ve seen in anything, but in everything the sense of suggestion is fast and profound.

"Among critics in the West, W. G. Bowdoin wrote, 'Sandzén sees his motifs in a modern but not an ultra modern way, but he avoids, as he would a plague, any approach to the photographic idea. He carries his message with the highest confidence, which means conviction, and he does not seem to pause to find out whether his observers are for or against him. He is never hackneyed or conventional, and not having any convention to live down or hold him back, he dresses his Colorado trees and landscapes with ultra coloring and frequently with a most unusual pigment.'

"Giuseppe Pellettieri, a European art critic who was in New York at the time of the Babcock exhibition, summed up his impression: 'Birger Sandzén is a solitary who sits on a far-off mountain peak enveloped in sunlight.  He is a Wagner driven to paint in order to express his vision. Although he is Swedish by birth and European by training, he is unique in that he is individual in method and viewpoint. He is the poet-painter of immense sun-washed spaces, of pine-crowned, luminous, gigantic rocks, and of coloring–shifting desert sands. . . .The dreamer–painter is truly a master.'

"There were strong dissenting opinions about Sandzén’s paintings in the 1922 Babcock exhibition as well. The New York Times art critic observed that the paintings 'have brilliant and freshness and a loud, breezy cordiality of approach that immediately claim attention. . . .but sometimes concealing defects of fundamental structure, but oftener merely expressing a singularly invariable mood. . . . With all deductions made, it is a manly and personal art, still struggling between reality and imaginative generalization, but firmly founded upon the study of nature in its grander aspects.'

"The interest of Hamilton Easter Field, art critic of the Brooklyn Eagle, had been aroused because, as he wrote, 'For two or three years past it seems to me that no account of what was going on in the art world of the Mississippi Valley was complete if it did not contain reference to Birger Sandzén.'  Field offered both praise and criticism: 'His best work is as near to being great art as any living American often gets, but he often loses his feeling, for color, for arrangement, even for the relative values of different subjects as material to paint. There are things which are not paintable; others will lend themselves to painting. Sandzén’s Rocks and Snow [1922] is thoroughly paintable, and Sandzén has known how to bring out the quality of color and the rhythm of the lines of construction magnificently [see Plate 25].' ”

* History - About - Driscoll Babcock Galleries
For  Lydia's Sandzén's Body of Work Reviewed by N.Y.C. 1984  "American Impressionism," author William H. Gerdts , go HERE
*     *     *
Swedes: TheWayTheyWere
~ restoring lost local histories ~
reconnecting past to present
*     *     *
All color photography throughout Swedes: The Way They Were is by Fran Cochran unless otherwise indicated.
Copyright © since October 8, 2015 to Current Year
as indicated on main menu sections of
www.swedesthewaytheywere.org.  All rights reserved.