"The Other Swedes"
Honoring Them and Remembering Them
~ The Lindsborg Swedes, Their Neighbors & Friends
​
​Ms. Rebecca Copley
~ Honoring her as Bethany College's “first” graduate to become an
"International Concert and Opera Soprano"

​Ms. Rebecca Copley
As a child,
​ she grew up in the Swedish Augustana Lutheran faith 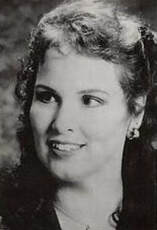 Kansas Smoky Valley Lindsborg Bethany College graduate Rebecca Copley‘s critically acclaimed professional debut was in Giuseppe Verdi's Otello with the New Jersey State Opera in 1987.  Here, she played the role of Desdemona opposite James McCracken, who was a pillar of the Metropolitan Opera and its most successful dramatic tenor in the 60s and 70s.  As reported by the English Opera, on her role, then,   "Desdemona‘s prayer was exquisite."  Just weeks later Ms. Copley debuted in Verdi's Requiem with the Paris Opera, then at New York City Opera as Puccini‘s Turandot, at Carnegie Hall with the New Jersey Symphony as Wagner‘s Isolde, and at the Metropolitan Opera as Amelia in Verdi's Un Ballo in Maschera.  Thus, she began her career as being applauded by the critics, as “one of America’s most gifted vocalists.”

Ms. Copley's career as an "International Concert and Opera Soprano" began at New York's Lincoln Center Avery Fisher Hall in 1986 when she performed in Bach's B Minor Mass.  And, in May of 2009, this exciting career came to a perfect ending with her performance in Gustav Mahler's Symphony No. 8, also referred to as the Symphony of a Thousand because it requires huge instrumental and vocal forces.  This performance was such a fitting end to this career, since, throughout it, her performances were characterize by "singing the most demanding repertoire for soprano!"

These performances, requiring singing in Italian, German, French, Basque, Latin, Polish, Swedish, or Russian, she performed gallantly in North and South America, Europe, Asia and South Africa, while working with some of the most renowned conductors of her time such as James Levine, Valery Gergiev, Hugh Wolff, Robert Shaw, Philippe Entremont, Theo Alcantara, and Lawrence Leighton Smith.  (Very early on, and throughout her career, being coached privately in foreign languages and in diction classes was a must.)

​Of course, as a Bethany College graduate she would make special heart-felt soloist appearances with the Lindsborg Bethany College Oratorio Society Messiah performances for Easter Holy Week.  She was, also, able to arrange her performing schedule to teach full time at Bethany for one year and to serve on the Board of Directors for six (6) years during her career.

​Of special note was her debut in Bilbao, Spain.  It was there that she performed and recorded the title role, Amaya, in Jesus Guridi's, Basque opera, Amaya, sung in Basque.  Amaya was released in Spain as a private limited premier addition recording which was followed by the international Marco Polo release in October 2000.  To learn more, go HERE to Ms. Copley's website section titled  "Music on CD."

Some of her opera and symphonic works are listed below that are found HERE in her website section titled "Repertoire," that also lists the "leading lady" operatic roles she played.

Some of her rave reviews have been organized into this section, Ms. Rebecca Copley "International Concert and Opera Soprano" ​~ The REVIEWS found HERE.  Their source comes from Ms. Copley's website section titled "Reviews" found HERE.
In 1992, the Alumni Association of Bethany College awarded her with the Gold Award for Achievement, the "first" of its kind to be awarded.  This award is presented to graduates of the last two decades who have made outstanding contributions to society, and whose achievements to date, demonstrate a person who shows promise, has high aspirations and has made a difference in the lives of people around them."  Ms. Copley was the first alumnus to be presented with this award and it continues to be awarded to this day!

She was also honored as "Musician of the Year" from the Kansas Federation of Music Clubs in 2004.

Twenty-eight years later in 2016, Ms. Copley would be especially honored to sing at the dedication of the Presser Hall "Copley Stage" honoring her parents posthumously for all the time they spent of their professional lives on that stage coupled with their steadfast commitment in carrying on the Messiah tradition and the excellent teaching that characterized so well those Oratorio Society Messiah and Saint Matthew Passion performances.

Ms. Copley received a Bachelor of Arts in Music from Bethany College in 1974 where she had first studied under her father.  Her career and additional studies began at the Aspen Music Festival with professional vocal teacher Michael Trimble, a former fine American international opera singer.  Their association continued, and her studies continued, after he left Aspen for the University of Texas at Austin where he was teaching as a guest artist and Ms. Copley became his teaching assistant.  This arrangement lasted until she returned to New York City to begin auditioning there to make her career happen.

While in New York City, she also studied at the private studio of renown Barnard Taylor, a former Chairman of Julliard School of Music and voice teacher, who had been her father's teacher.  Their introduction was in 1973 when she first auditioned for him, as a junior when the Bethany College Choir was in New York for its debut at Lincoln Center's Alice Tully Hall.  She continued her studies under renown Berton Coffin at the University of Colorado-Boulder, internationally recognized vocal pedagogue.

​ICM Artists, LTD Tony Russo would be her manager for her entire career.  (ICM stands for International Creative Management and is a talent and literary agency that was formed through a merger in 1975.)

When she retired from the opera and concert stages, teaching followed in 2010, when she was invited to teach to 2011 at Fort Lewis College, Durango, Colorado.  Another invitation quickly followed from the University of Oklahoma at Norman to take the place of a member of their voice faculty who would be on sabbatical in 2011.  She and her husband Don Johnson, a Swede and accomplished organist and pianist as well, eventually returned to their Kansas Smoky Valley farm near Lindsborg from their Colorado home.  Here, she would set up a private vocal studio.  In January 2014, she began teaching at Kansas Wesleyan University as the Director of Vocal Studies through June 2019.

These regional colleges and universities have found her professor and artist visits in the capacity of music and voice instructor and music clinician most worthwhile due to her vast experience and eagerness to teach.  ​The overflow of this mentoring of others continues with serious students coming to her home studio.

​To learn more about her parents, go HERE to Dr. ​& Mrs. Elmer Copley ~ Remembering them and their 29 years of dedication to that Bethany College "Messiah" tradition of excellence.