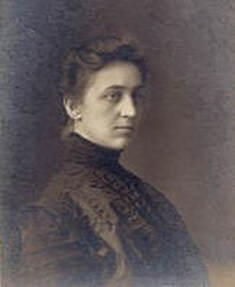 Go HERE for the history on "The Gateway" to Bethany and the "Bethany Campus Association."
Who She Was To The Students
​​When she taught Swedish and Scandinavian handwork at Bethany College from 1906-1913, she was Miss Sohlberg
​
Giving us a glimpse of the way they were is the following tribute after the passing of Lydia on July 17, 1943 by her former student Eleonora Stromquist-Esping who knew her from her childhood:
Passing of a Good Woman Who's Benefactions Will Live
With sincere devotion this tribute is dedicated to my former teacher Lydia Solberg Deere
-- Eleanora Stromquist-Esping of Carlin, Nevada, July 17, 1943

“One of the most pathetic things about death” wrote the poet Holland, "is bidding goodbye to a body that has been the home of a generous spirit” – a spirit which has cheered and comforted and helped those within the range of its influence.

For years and years Mrs. Deere has been prominent in Lindsborg community life, and now she is gone. It is comforting to know that parting is only an interlude, for good deeds and love are eternal.

Lindsborg will miss her for her fine qualities of friendliness and gracious personality. Women of her solid worth, "the salt of the earth,” when they go, may be likened to the disappearing of an old landmark.

Lydia Deere was a superior woman, a devoted wife to her distinguished husband, (also a former teacher of mine and of my husband), a loyal friend, a useful citizen of this nation, a devout Christian of undisturbed serenity, whose sterling womanhood was founded on faith in the hereafter. She walked through the valley of the shadow of death, but feared no evil, for she followed the path of righteousness while goodness and mercy strode beside her to the end of the journey. "We bless thee that they have passed into the light.”  (From a Scotch Book of Prayer.)

In a world which is crowded with people, all clamoring for distinction in some legitimate way, Mrs. Deere excelled with her gift of art.

In the words of the beautiful Shakespearean phrase, Mrs. Deere ”dropped manna in the way of starved people.” It was she, who, in my early childhood days, developed “the love of and for all things beautiful,” which had already been aroused and inspired.

It seems but yesterday that our lively trio in Model School… Bertha Holmberg-Anderson, Rosalie Welin-Brown, and I were hurrying (with our braided pigtails a flying tied with huge hair-ribbon bows) to Miss Sohlberg's apartment at the Ladies’ Dormitory (Mrs. Deere was at that time Dean of Women and Matron of the Ladies Dorm) for our bi-weekly sewing lesson.  Her masterpieces of art and needlework were a constant source of inspiration to our impressionable minds…and under her excellent instruction our fingers grew nimble with lovely and useful hand-embroidered articles for our mothers and our “hope chests.”  I can easily describe in two words Mrs. Deere’s finished works – "exquisitely beautiful." Could these not also be applied to her life?

But it was not only the love of beauty and art which Mrs. Deere installed in our youthful minds and hearts but also an enjoyment of friendly, gay and instructive conversation. Because of her keen sense of humor, her ready and sunny disposition we were always assured of a "good time," too, when we as little girls had our sewing lessons. You will not wonder then, when the sad word of her passing reach me, that in my heart, I wept sorely and long.

Her strong supporting philosophy of life gave Mrs. Deere the elegance of moving smoothly through life.  Straight toward goals of accomplishment and joy; of soothingly stepping through life, dropping the healing word, giving the healing touch… a delightful person with the rare gift of a, "light touch.”  The shades of her heart were always pulled up; and the brilliant sunshine of courage, filling her world with warmth and beauty, was just outside her door. And at all times, her candles burned brightly before the high altar of faith and love.

Mrs. Deere truly lived the philosophy of Elbert Hubbard, The Sage of East Aurora. "Carry your chin in and the crown of your head high. Create your friends with a smile and put your soul into every handclasp. We are gods in the chrysalis.”

I do know that because love has gone there is no ruin of the beauty of love which has been.  Every great human affection is immortal; so, perhaps, is every smallest. Memory is a miracle worker.  If you can remember the dead with a heart passionate enough, they do not die, at least until you so go yourself. And then if you, too, sleep eternally, shall they not sleep as well?

After the pioneers came the builders. The first have continued their westward venture into the haze of the setting sun. The ranks of the second are thinning rapidly. As Longfellow said: “The air is full of farewells to the dying in the morning for the dead."

Now that you are gone,  I am grateful for your Christian friendship. I keep in blessed memory your words of hope, cheer and goodwill. Your teachings left deep impression which will remain with me as a burning and shining light as long as memory lasts.

Durability
I saw a great redwood tree,
I saw 1 trillion stars;
I saw a fiery colored line
That left long sooty scars.
I saw a forest and a stream;
A cliff--hard wall of grey.
I saw a fawn – a hill of ferns
These, too, shall pass away. 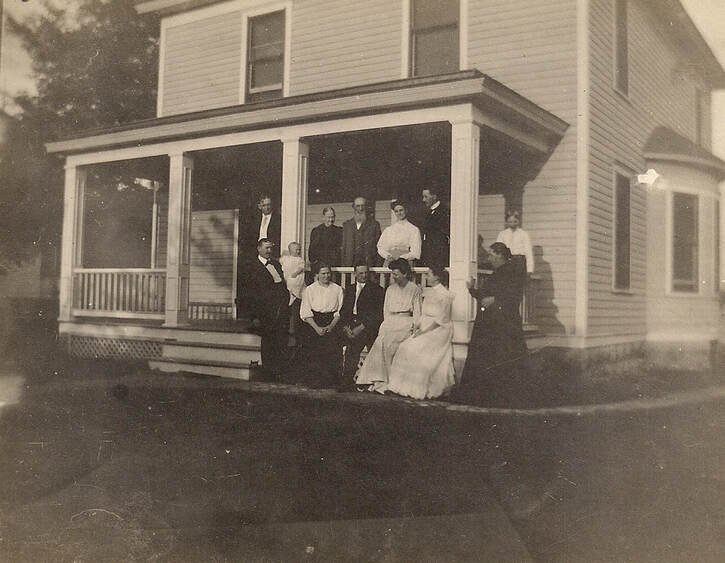 Lydia Elida Sohlberg was born on August 22, 1873 in Holmes City, Minnesota, and was the youngest of eight (8) children.  She and her siblings were tutored by a bachelor who lived with them.  In McPherson, Kansas she would go to public school and would  eventually earn a degree in Commerce at McPherson College in 1900. In Lindsborg at Bethany College she would earn a Bachelor of Fine Arts Degree in 1923 and a Bachelor of Science Degree in 1925.

Her parents, Anders Gustaf (AG) Sohlberg and Ingrid Elis Anderson Sohlberg, had begun their Swedish honeymoon and immigration journey to North America from Jönköping just a few days after their Midsummers' wedding in 1854.  Sailing through the St. Lawrence Seaway, they were quarantine in Hamilton, Ontario, Canada, before entering the United States.  The first Swedish communities they lived in were found in Chicago, Wisconsin and Minnesota.  When they moved to McPherson, Kansas from Minnesota in 1880, Lydia was seven years old.  Here, her parents became charter members of the Swedish Lutheran Church (Trinity Lutheran Church) which was founded a year after their arrival.

At the age of fifteen, Lydia was confirmed at the Lutheran church in New Gottland, nine miles northeast of McPherson where her oldest sister's Jennie's  husband, Rev. Aaron Wahlin, was pastor, a pastorate he held for eighteen years from 1886 to his death in 1904.

While she was attending McPherson College, Lydia was also working as an assistant for her father who owned a mercantile business in McPherson.  Here she also worked with her cousin Ernest Sohlberg who had immigrated from Kosta, Sweden in 1885 and with Swede Eric Leksell who with his family and son-in-law-to-be, Birger Sandzén, would become significant lifelong friends with Lydia's family.

Lydia's formal introduction to Lindsborg came in 1900 after she graduated from McPherson College and opened up a millinery shop on Main Street with her twin sisters, Anna and Ida.  She was 28 and they were 30.  With this job came her interest in photography and the purchased of a Kodak camera which would produce a myriad of photographs for the next twenty-five years of her life lived in Lindsborg and at Bethany College.

Her introduction to the College came in 1906 when she accepted a job as "Dean of Women and Matron" (also referred to as the "Lady Principal and Matron") of the Ladies Dormitory, Lane Hart Hall, a position which lasted into 1913.    Here at the girls dormitory, she was noted by student Charles Swenson, Class of 1912, as "the charming matron at the girls’ dormitory. She was a favorite of all the girls who live there, as well as the aspiring young men who were privilege to visit Lane Hart Hall."**

In the mid 1920s, Lydia's artistic interest turned from photography to serious painting at Bethany when she began classes there in 1919, and an art class from professor Birger Sandzén.  All along though, early on in her life she practiced the handwork of Sweden and Scandinavia taught to her by her mother who worked as a seamstress in Jönköping, Sweden where her parents wedding took place.  Lydia, in turn, would teach this handwork at Bethany College around the time period from 1907 to 1913.
Throughout her life, Lydia kept in touch with her Swedish Sohlberg relatives in Sweden from her Uncle Ulric's family.   Ulric was her father's (AG's) brother and he also was the father of Ernest Sohlberg who had immigrated in 1855 to McPherson and would marry Selma, Lydia's sister.  Lydia's Uncle Ulric's family had lived in various places in Sweden but Kosta and Stockholm were the predominant cities they called home.  Ulric would enjoy good business enterprises in Sweden, one being a superintendent position at the Kosta Glasbruk Factory  (today's Kosta Boda) for nearly 20 years.  As the family story is told, his three daughters, Alma, Nina and Emma, would eventually make their living as seamstresses, sometimes taking their samplers of gold thread embroidery to the Royal Palaces in Stockholm and elsewhere for commission work.  As the letters from Sweden prove, there was much correspondence between these two families until 1955, with the death of the last member of Ulric's family, Emma Sohlberg.

Her photograph and obituaries appear HERE, in Lydia's Art, 1919-1938, scrolling to the end.
​-------
​Lydia and Emil are at rest at the Lindsborg Elmwood Cemetery
in front of the large white mausoleum for Lydia's parents born in Sweden:
​ A. G. Sohlberg & Ingrid Elis Anderson Sohlberg.
Lydia is on the right and Emil on the left. 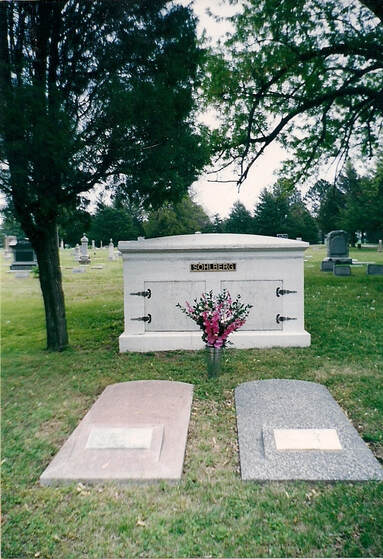 All color photography throughout Swedes:  The Way They Were is by Fran Cochran unless otherwise indicated.
Copyright © 2022 www.swedesthewaytheywere.org.  All rights reserved.