Lydia would meet her art-professor-to-be, Sven Birger Sandzén, probably around the time when he first arrived in Kansas from Paris when he was visiting the Eric Leksell family in McPherson in the fall of 1894.  At that time, Lydia was living with her parents in McPherson (who had arrived there in 1880) and was most liking helping Eric Leksell, her recently arrived from Kosta, Sweden cousin Ernest Ossian Sohlberg, and her father at his business, the "A.G. Sohlberg Mercantile Co." located on the corner of Main and Kansas Avenues.  See their letterhead below:
- LETTERHEAD -
Sohlberg - Leksell - Sohlberg

Cochran Papers
Leksell would become the God-father to A.G. Sohlberg's granddaughter Nina Sohlberg and soon after the father-in-law to Sven Birger Sandzén.
- AD - 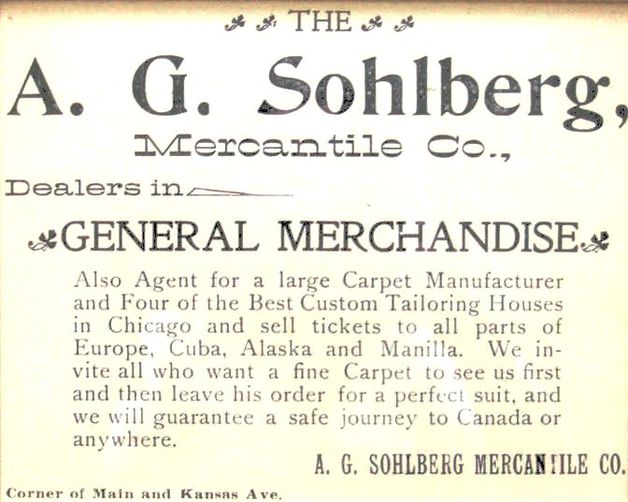 Cochran Papers
It was Christmas Day of that year when Eric and his wife Charlotta Leksell were to become Godparents to A.G. and Ingrid Sohlberg's granddaughter, Nina Elise Henrietta Sohlberg, who had been born on November 21, 1894. The Trinity Lutheran Church dedication was either before or after their Christmas Day celebration with their daughter Alfrida, and  the man to whom she would marry in 1900, Birger Sandzén, who was celebrating Christmas with them.  Most likely, much of the Sohlberg family including, A.G. and Ingrid (charter members of the church), Ernest and Selma Sohlberg -- parents of Nina, Lydia  and her siblings and their spouses were present for this special Christmas dedication.  Perhaps, even Birger Sandzén was there.

Page 9, first column and second sentence of the 1993 catalogue, Sandzén and the New Land, brings me to this thinking with the following text:  "In October 1894 he [Sandzén] reported [to his father by letter] that the Leksells had a daughter Alfrida, who was an outstanding piano student at Bethany College.  Birger celebrated a joyous Christmas with the Leksells and Engströms in McPherson and he became a frequent visitor to the Leksell home." 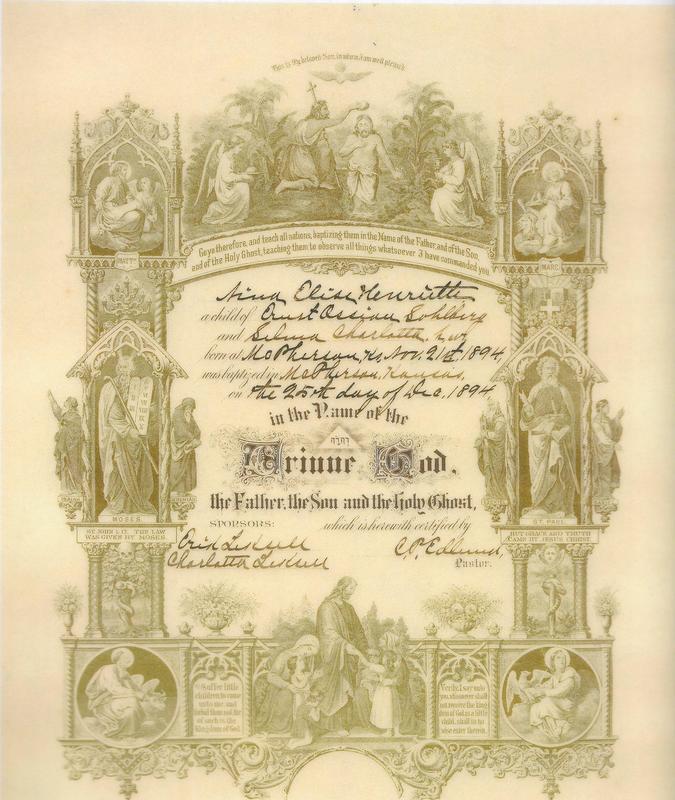 Nina Sohlberg Fry Papers
This Nina Sohlberg would be the subject of Lydia's many photographs, and she would become a very close older friend, in time, to Alfrida's and Birger's only child, Margaret Elizabeth Sandzén, who would be born in 1909.  That friendship would not only include Nina Sohlberg Fry, my grandmother, but her daughter/my mother, Lois Fry Cochran, and my sister Melinda Cochran and me.  With Mrs. Sandzen Greenough's death in 1993, this wonderful family friendship came to a close.
So close indeed were my mother and Margaret Sandzén Greenough that phone calls between the two were often, and visits to our homes (Sohlberg House and Deere House) were as well by she and her husband Dr. Pelham Greenough III.  These two ladies would have their last visit together in June of 1984 at the Lindsborg Viking Motel when our mother was returning to California, after twenty-three years of living in Lindsborg, for lifesaving surgery in San Francisco to join us, her daughters.  Margaret and our mother continued to visit by phone and letters until Margerat's death in 1993.And with Lois Cochran would come what remained of the Sohlberg Deere Estate!

1908
Eric and Charlotta Leksell letter in Swedish of condolences to the wife, Ingrid, of Anders Gustaf Sohlberg
from
Hill City, Kansas 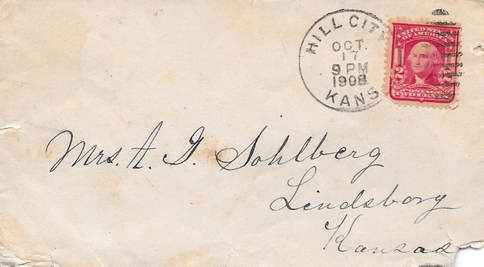 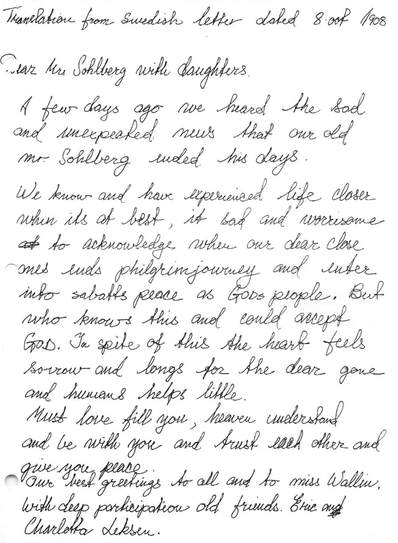 1916
Little River, Kansas in front of the Sohlberg Mansion
Emil O. Deere, Birger Sandzén and his Alfrida and Margaret; Roena and Theodore Sohlberg 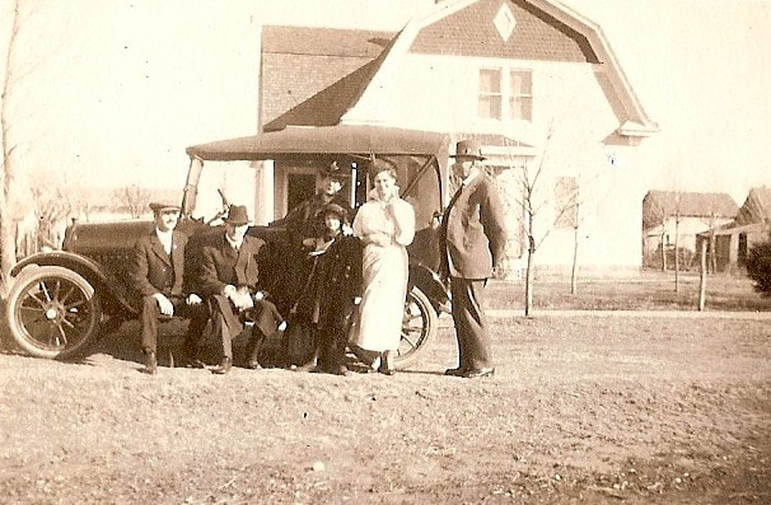 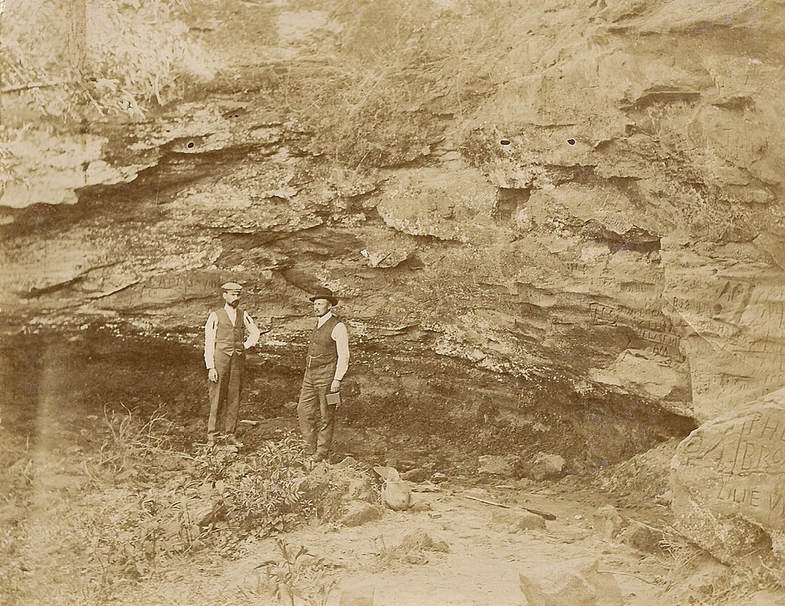 Photograph by Lydia Sohlberg Deere
* From Wikipedia Kansas Demographics
*   *   *
Swedes: TheWayTheyWere
~ restoring lost local histories ~
reconnecting past to present
*     *     *
All color photography throughout Swedes: The Way They Were is by Fran Cochran unless otherwise indicated.
Copyright © since October 8, 2015 to Current Year
as indicated on main menu sections of
www.swedesthewaytheywere.org.  All rights reserved.