Lindquist describes Sandzén's Paris experiences in his book on pages 13 and 14 as follows:  "The great cultural traditions of Paris enabled Sandzén to immerse himself in the beauty and meaning of art historically, and the lively activity stimulated him to enrich his own talents.  As a young painter surrounded by the inspiring work of famous painters, printmakers, sculptors, and architects, he felt a new sense of belonging to a great tradition.  He was free to paint, to view masterpieces, to discuss art, and culture generally with kindred spirits, to dream, and to share in the life of a Parisian.  The Café Versailles and the Restaurant Le Maitre were favorite meeting places of the art students where they shared good food, pleasant fellowship, and fine music.  The environment inspired Sandzén to full dedication to what now seemed truly to be his life's calling….”

Sandzén’s Aman-Jean classes included students from 12 other nations, some of whom were from America, a country which intrigued Sandzén.  The vastness of it and the great promise that it held for foreigners as well as the abundant opportunities it held for artists to paint the beauty and splendor of landscapes untouched was persuasive and enthralling.
Sandzén Student
- LYDIA SOHLBERG DEERE -
(1873-1943)
KANSAS 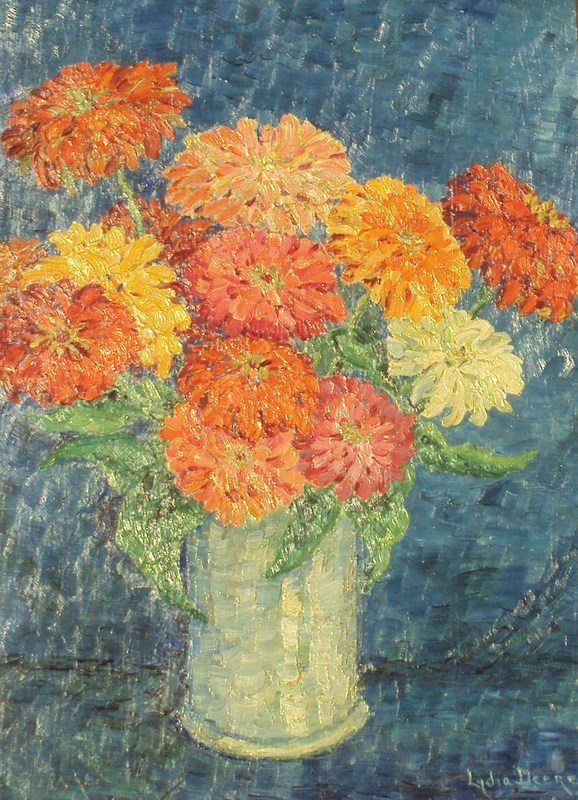 Courtesy of Lindsborg owner.
This new land, along with the captivating literature on Lindsborg and Bethany College, Sandzén read from the 1891 book,  I Sverige, (In Sweden) by Swedish American Bethany College founder, Dr. Rev. Carl Aaron Swensson, further fueled the fire of Sandzén’s dream to one day live in America.

Hence, despite Sandzén's studies with Zorn and Berg in Stockholm -- the beautiful Venice of the North, and his stimulating experiences as an art student in Paris -- the most splendid cultural capital in the world, Swedish Lindsborg, centered in the great barren plains of Kansas, won his heart, finding him writing a letter from Paris in February of 1894 to Swensson regarding employment to become an instructor at Bethany College.
As Swensson was traveling through Europe during that same year, he met with Sandzén in Paris.  He was so impressed by him that he invited the twenty-three year old Swede to join the Bethany faculty.   Thus, Sandzén was on his way to America, to Kansas, to Lindsborg, to Bethany College, to begin his teaching career, and to paint the landscapes of the American West!

This was the Sandzén that Bethany College would receive in late 1894 at the age of 23 -- an artist fresh from Paris, full of cultural joy and ideas, wanting to share them all with those at the College.  These were the planted seeds which would eventually begin an art movement drawing many in the Kansas Smoky Hill Valley, students and residents alike, to study and to appreciate art at Bethany College.

While his first assignments as a professor at Bethany College were to teach courses in Swedish, German and French, Sandzén also assisted Olof Grafström (1855-1933) in the Art Department.  Grafström,  born in Attmar, Medelpad, Sweden, would graduate from the Academy of Fine Arts in Stockholm with two of Sandzén's former teachers, Anders Zorn and Richard Bergh in 1882.  There after, he began his career as an artist painting the landscapes of Northern Sweden and Lappland until 1887 when Grafström moved to Portland, Oregon to paint the American Northwest. Before moving to Lindsborg to teach art at Bethany College in 1893, he also lived and painted in Spokane, Washington, and San Francisco.

In 1897, when Grafström accepted the position as head of the Art Department at Augustana College, founder and second president of Bethany College Dr. Rev. Carl A. Swensson, upon the recommendation of Sandzén, hired Carl Gustafson Lotavé (1872-1924) to become the head of the Art Department.  Born in Jönköping, Småland, Sweden,  Lotavé had been a classmate of Sandzén's while they studied together under Anders Zorn in Stockholm in 1891.  He was already a recognized and established artist on the Continent whose subjects he painted were of European Royalty and famous persons.

In 1899, when Professor Lotavé was hired by the Smithsonian Institution to paint Native American scenes, he relocated to Colorado Springs at which time Sandzén became the Chair for the Art Department at Bethany.  His predecessor and friend was to finish his art career in New York City painting portraits including those of famous World War I American Generals. 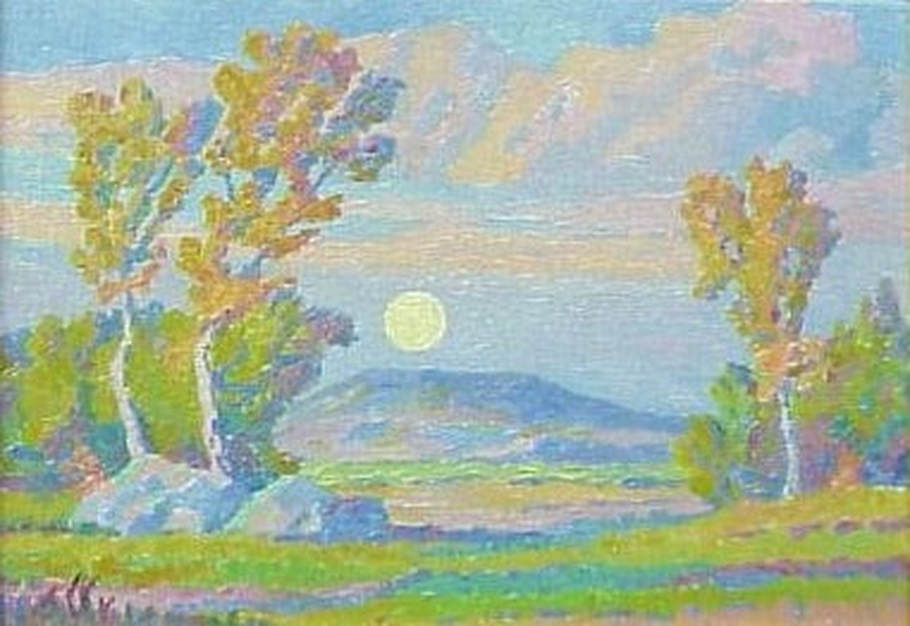 Source: Bing Images
Thus, Lydia’s art professor was destined to live his dream, to paint the American landscape of the wild rugged West by becoming a Swedish American pioneer settling in the little Swedish city of Lindsborg to teach art at Bethany College.

Sandzén would leave an incredible "legacy of visual art" behind in Lindsborg, and art of which would filter out to other parts of the nation, to Europe and Sweden.  The abundance of art in Lindsborg is the direct result of Sandzén’s ability to have instilled a contagious love for art and its understanding with his students, and, more generally throughout the Smoky Valley, and specifically within this tiny "isolated" rural Kansas community (as many considered Lindsborg, then, to be "isolated"), which to this day still draws artists to visit temporarily or to settle there and practice their craft.

Because of his great contribution to culture through art, this Swedish gentlemen and Swedish American pioneer, Sven Birger Sandzén, was destined to be honored by the Swedish Crown two times being knighted by the King’s emissaries, receiving Sweden's "Order of Vasa" in 1901 and the "Order of the North Star" in 1940.

The art that Sandzén was exposed to in Sweden and France as a student and later as a traveler throughout Europe, he most certainly shared with his students in the Smoky Valley of Kansas.  To share his knowledge and passion for art was his mission then, parts of which so appropriately live on to this day at the Lindsborg art gallery which bears his name, the Birger Sandzén Memorial Gallery, with the mission statement that reads: "Sharing the arts with the world, through the life and vision of Birger Sandzén."

Dr. Emory Lindquist  who has written so fluently and passionately in his book on Birger Sandzén and his art was also knighted personally in Lindsborg at Bethany College by the Swedish Crown, King Carl XVI Gustaf,  in 1976, for his similar cultural contributions.
Sandzén Student
- Dr. LEON LUNGSTROM -
Bethany College Biology Professor
(1915-2000)
KANSAS 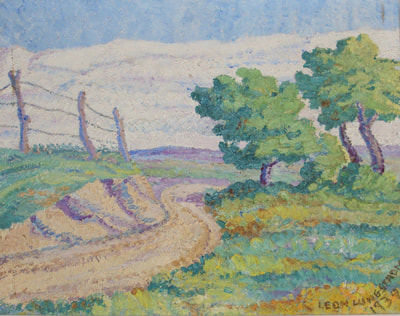 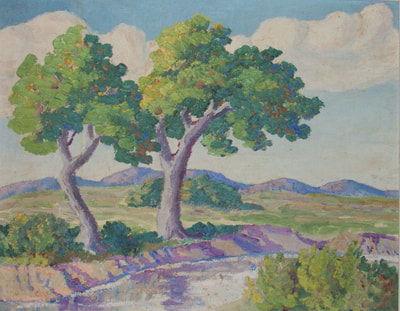 To be clear, Lindquist portrays Sandzén as not belonging to any school of art, as he continued in his own style.

On page 23, Lindquist writes,  “As a teacher of art, Sandzén put forth a central principle that 'the art teacher as well as the critic and the general public should respect and encourage a sound and healthy individualism which is the one normal and logical motive power in art production, and should discourage imitation, repetition and standardization.  A work of art is a personal message from soul-to-soul and cannot be made after formulas.  The Cézanne formula will not lead to goals any more than the old academic recipe.'   Giving further emphasis to individualism, Sandzén observed: 'Fortunately, every artist has the opportunity of counseling with a teacher that is always ready to give the very best advice to the sincere and unsophisticated disciple.  The name of the great master is Nature.  Study various schools, traditions and masters as much as you like, but do not let them take away from you the most precious gift of the Creator, your own individuality.  Individuality and Nature in honest partnership will always create new and fascinating works of art that will never grow old. . . . If we study long enough with the Great Teacher [nature] we shall gradually work our way through imitation to free interpretation.' ”
Sandzén Student
- ZONA WHEELER -
"Third Dimension Studio"  Owner
(1913-1998)
KANSAS 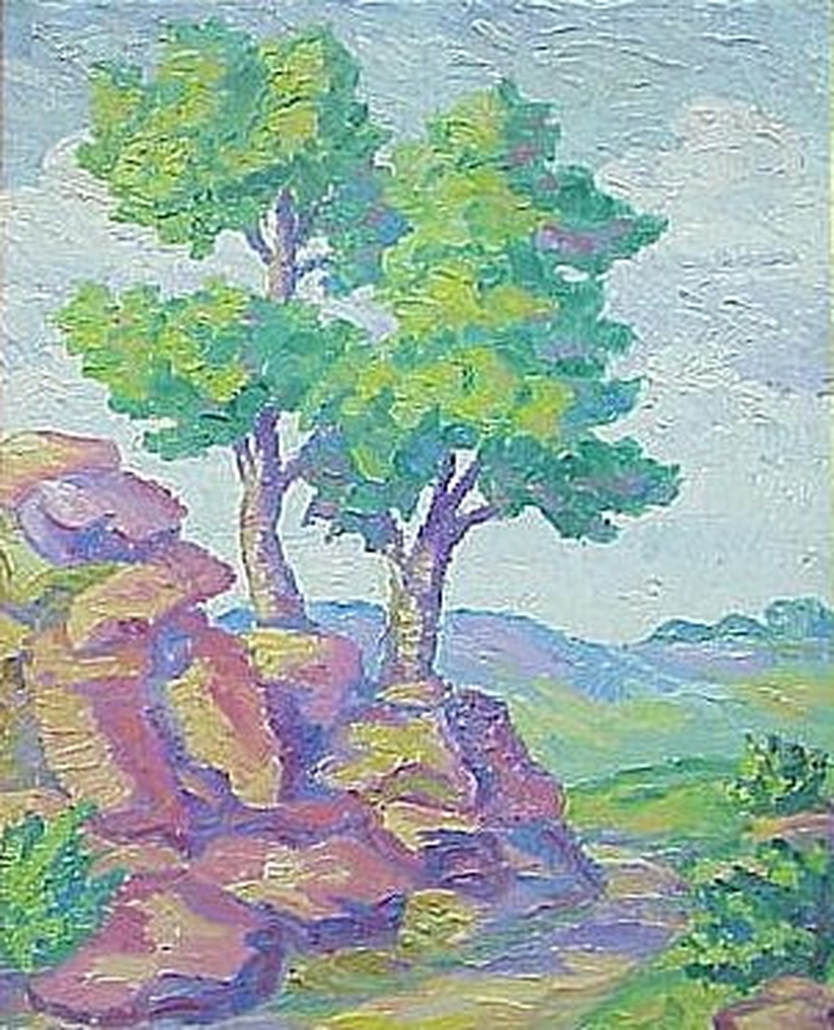 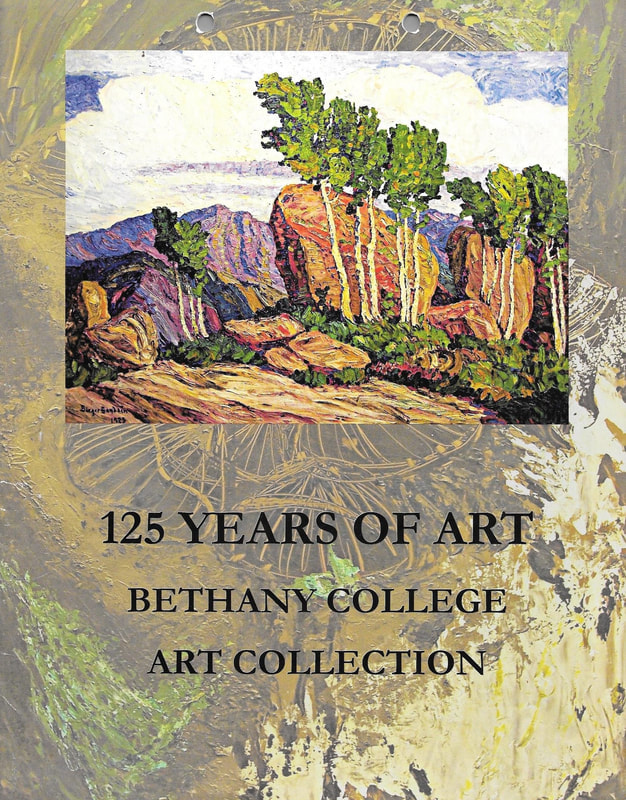 For Lydia's Assignments for Professor Sandzén, go HERE.
​For Students of Sandzén 2019 Exhibition, go HERE.
For Lydia's Sandzén's Body of Work Reviewed by N.Y.C. 1984 "American Impressionism," author William H. Gerdts, go HERE.
*     *     *
Swedes: TheWayTheyWere
~ restoring lost local histories ~
reconnecting past to present
*     *     *
All color photography throughout Swedes: The Way They Were is by Fran Cochran unless otherwise indicated.
Copyright © since October 8, 2015 to Current Year
as indicated on main menu sections of
www.swedesthewaytheywere.org.  All rights reserved.