​Following are the words on some of the foundational history of Bethany College by former Biology Professor Dr. Leon George Lungstrom (1915-2000) from his 1990 book, ​​"History of Natural Science and Mathematics at Bethany College, Lindsborg, Kansas" published in 1990.  Some editorial marks and divisions may appear throughout the text, some in red font.
​The Old Main Building and Nelson Science Hall
"In 1968 when the news was released that the Old Main Building would soon be razed and removed from the campus, it had already been vacated and subject to disrepair.  The roof was already leaking when the Museum was moved out in 1966. Vandals and prowlers were ransacking the structure from time to time. This seemed like a lonely and sad ending for a proud and stately structure that had served Bethany College and the community for 81 years.  It defied destruction to the extent that the company engaged to knock it down and remove it was required to get much heavier equipment than was expected to be able to begin knocking the first wall down.

"The students of former years who had classes on the fifth floor most often entered by the south or main entrance and ascended each floor level by first a central set of stairs and then turning to ascend a side step of stairs on either the right or left side. However, if instead the student decided to go to the cafeteria in the basement, he or she would walk down just a few steps to the basement floor, which was only 28 inches below the outside ground level. If the student then decided to go to the fifth floor from the basement level, it would be necessary to ascend using 93 individual steps.

"Student entrances to the building were also located at the east and west ends. Here the person could enter at slightly above ground level and either take a continuous ascending stairway up to the next floor or descent a short distance to the basement level.  Of course there was also an additional entrance to the building through the kitchen area.

"This stairway system at the front entrance had the railing of each of the side sets of stairs separated from the railing of the central stairs by 10 or 12 inches, thus permitting one standing on the 5th floor the opportunity to drop a small ball uninterrupted down to the basement from either the right or left side between one of the side stairways and the central stairway. To avoid excessive wear, each step was capped with an iron plate inscribed with the word "Bethany"

"Plates OM-1, OM-2, OM-3, and OM-4 show photographs displaying different views of the Old Main Building at different periods of its existence. These photographs, compared with the floor plans included, can help to give the reader more of a three-dimensional view of Old Main both inside and outside.

"The floor plans published with the Bethany College catalog in 1885-1886 (the school then was called Bethany Normal) may differ considerably from floor plans of the structure as they existed in later years. The question arises, could this change be due to renovations or could it be due to last minute change prior to construction or in the midst of ongoing construction? The floor plans for the more recent years are done largely from memory years after old Main was demolished. Several persons were consulted in an effort to record this information.  Although it was done with the greatest effort for accuracy, no doubt errors will be found.

"The basement floor (Plate OM-5) copied from the 1885-1886 Bethany College Catalogue shows a corridor extending through the building.  In later years the building had a corridor extending completely through the building from one end to the other on every one of the five floors and basement. On the Plate OM-6 floor plan, a brick building in close proximity to Old Main is included.   It was not as close as portrayed in the drawing. The building contained a bakery, laundry, locker room, restroom and office located on the ground level.  In its basement was located the heating plant. This building with its small smokestack is still standing, but the rooms are not used for the same purpose as indicated, which was at the time when Old Main was still functional.
START
"The plan for the first floor in Plate OM-7 is copied from the 1885-1886 Bethany College Catalogue.  Plate OM-8 displays the plan of the first floor shortly before Old Main ceased to be a functional building. Plate OM-7 shows three additional stairways that did not exist in Old Main during its later years.

"The plan for the second floor on Plate OM-9 is copied from the 1885-1886 Bethany College Catalogue. It does not show a corridor extending entirely through the building as is shown on plate OM-10, a more recent floorplan of Old Main.  Plate OM-11 is an enlarged view of the lower (second floor) level of the Chapel, showing the podium and seating arrangement.

"The plan for the third floor on Plate OM-12 is copied from the 1885 to 1886 Bethany College Catalogue.  It, too, does not have a corridor extending through the entire building as is displayed in Plates OM-13 and OM-14, of more recent periods.  The dotted lines on Plate OM-14 possibly were room partitions at an earlier date. The drawing for Plate OM-13 was probably prepared for dormitory room assignments by Professor Deere.  It shows locations for music practice rooms. This sheet, undoubtedly dates back to the early 1920s.  Presser Hall became the location for practice rooms after its completion in 1929. The rooms 78 and 80 on Plate OM-13 were changed into an elongated restroom at a later date. During its later period, Old Main had restrooms in this identical location on second, third and fourth floors, which are not identified on plates OM-10 and OM-14. Plate M-15 shows an enlargement of the seating arrangement of the gallery section of the Chapel on the third floor level. Professor and Mrs. Deere had their apartment in the areas 68 and 69, Plate OM-14, from 1919 until 1940.  Most of the rooms on the third floor were for dormitory purposes.

"Plate OM-18 shows the floor plan of the fifth floor area during later years.  The balances for chemistry were housed in the wall case (#17).  Number 13 shows the location of the stairway to the turret, a smaller rectangular structure one floor level above fifth floor. It was used to house two water tanks filled with a windmill located east of the Old Main Building.  Those tanks provided the pressure for the building's water supply.

"Earlier references stated that after Old Main was completed, the top four floors were used largely for the dormitory.  Later the sciences were moved from the basement to the fifth floor.

OM - 2 - Front view of entire structure from the south 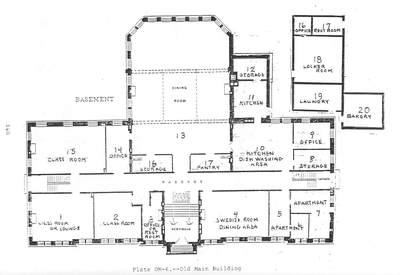 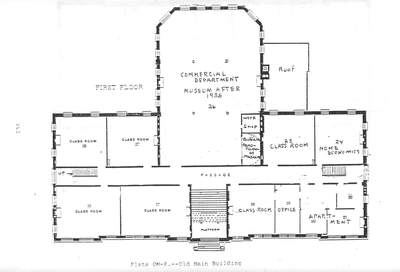 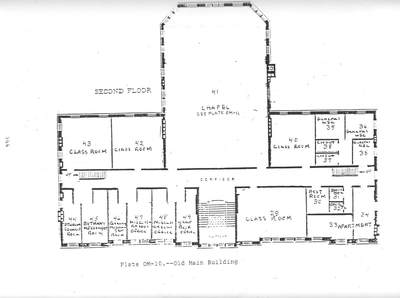 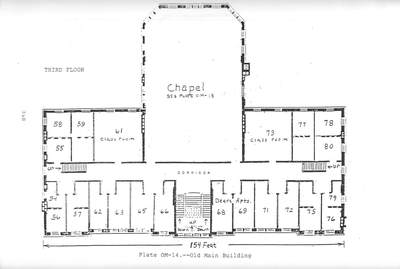 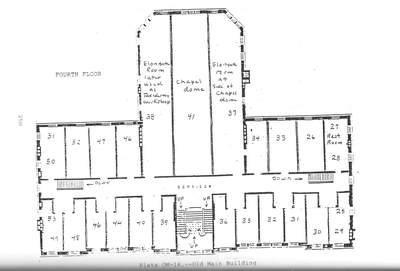 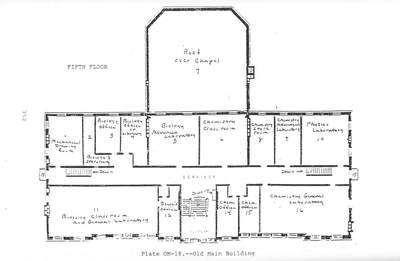 * Email of September 25, 2017 from Denise Carson, M.L.S. Assistant Professor Director of Wallerstedt Learning Center.
*     *     *
"Let Us Remember Them"
*     *     *
Swedes: TheWayTheyWere
~ restoring lost local histories ~
reconnecting past to present
*     *     *
All color photography throughout Swedes: The Way They Were is by Fran Cochran unless otherwise indicated.
Copyright © since October 8, 2015 to Current Year
as indicated on main menu sections of
www.swedesthewaytheywere.org.  All rights reserved.