Home
The 1860 Formation of the Augustana Synod
~ An Account by Mr. Thomas N. Holmquist

Mr. Thomas N. Holmquist puts forth a riveting, informative, and easily understood account of the step-by-step Swedish development of the Augustana Lutheran denomination in North America in his 1994, Pioneer Cross, Swedish Settlements Along the Smoky Hill Bluffs.

The Swedish Lutheran Galesburg Colony that arrived in the Smoky Valley that would establish the settlements of Salemsborg and Freemount was fully connected to the very beginnings of the formation of the Augustana Synod in 1860, more so than the Olsson Colony of Värmland Lutheran Swedes who arrived in Lindsborg fresh from Sweden.

Found in Chapter 2 of Mr. Holmquist's book "By Faith Alone" is the subheading "The Rise of the Augustana Synod," where he gives this most important information on how the Augustana Synod was formed, starting on page 29.
​
"The Rise of the Augustana Synod"
"As the 1850s ended, a significant population of Swedish born people were living in many communities of Illinois and the surrounding states. The Swedish Lutheran churches were growing and new ones were founded each year. Ten years earlier, when the Swedish population was small and its churches were few, Pastor Esbjörn had aligned the Swedish Lutheran churches with the Americanize Norwegians to give his fledging churches some stability. This predominantly Norwegian group was called the Synod of Northern Illinois. However, by 1860, the Swedish and Norwegian members of the Synod increasingly were disagreeing on matters of policy, doctrine and leadership.

[The 1860 institution was known as Augustana College and Theological Seminary.  Both the college and seminary moved to Paxton, Illinois in 1863, and then to Rock Island, Illinois, in 1875.  Becoming a separate institution in 1948, the Seminary returned to Chicago in 1967, but the College remained in Rock Island.  Go HERE, to learn more.]

"Esbjörn assisted his friend Erland Carlsson in Chicago.  Through the first formative years these eminently able men provided great strength and leadership assuring the success of this new synod and the Swedish Lutheran Church in the United States.

"By the year 1862, Pastor Lars Esbjörn had lost his position of preeminent leadership in the Augustana Synod, and younger, stronger men were taking over the yokes of responsibility and leadership.  His time had passed. The years of toil and hardship had taken its toll, but one final blow still remain . . .  For these reasons, Esbjörn decided to take a leave of his work here in America and return to his native land . . .

"The Augustana Synod met to choose new leaders to succeed the retiring Lars Esbjörn.  The Synod chose Erland Carlsson to be the new synod president.  T. N. [Tufve Nilsson] Hasselquist was chosen as a temporary President of the Augustana Seminary until a new theologian could be found in Sweden to take the position. Hasselquist remained in that "temporary position" until his death in 1891.

-----------------
Rev. Dahlsten would be the pastor who, with the help of church members, would eventually establish these first Lutheran congregations, the Swedish Kansas Smoky Valley churches of Salemsborg and Freemount located in their namesake communities which were to-be neighbors to Lindsborg that was founded with its Swedish Lutheran Bethany Church in the same year by Rev. Dahlsten's theology classmate of Sweden, Rev. Olof Olsson. 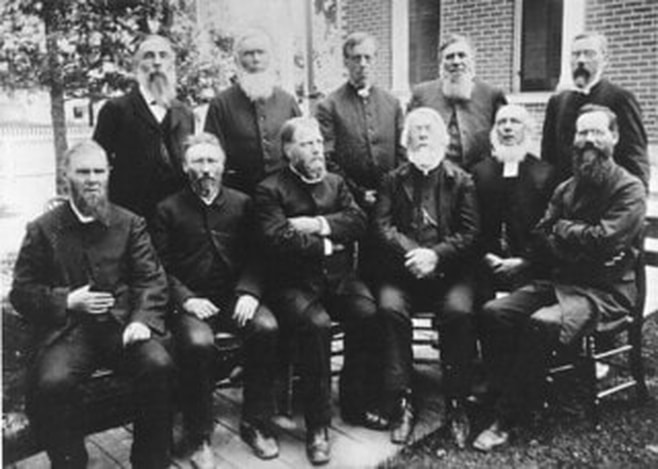 Source: Courtesy of the Augustana Heritage Association
​-------
These shared selections of Pioneer Cross have been shown to author Mr. Thomas N. Holmquist for approval, 9-12-22.
-------
​
​​*     *     * ​
"Let Us Remember Them"
*     *     *
Swedes: TheWayTheyWere
~ restoring lost local histories ~
reconnecting past to present
*     *     *
All color photography throughout Swedes: The Way They Were is by Fran Cochran unless otherwise indicated.
Copyright © since October 8, 2015 to Current Year
as indicated on main menu sections of
www.swedesthewaytheywere.org.  All rights reserved.