Home
​People still recount that it took a Dutchman to awaken the Swedes to the realization of their ​great heritage of customs and traditions.*
-- Dr. Leon Lungstrom
Their 1941 "Svensk Hyllningsfest" and Dr. William Holwerda's Role
~ Accounts by Dr. Leon Lungstrom, Mrs. Elizabeth Jaderborg, Dr. Holwerda, and Mr. Eric Lundstrom
​
There are many stories concerning the founding of Svensk Hyllningsfest and there certainly were many discussions that brought this idea of a Swedish pioneer festival into a reality.  Yet, now 80 years later, the name that it so identifies with is that of the Dutchman, Dr. William Holwerda (1901-1964), and therefore he is referred to by many as the "founder" of Svensk Hyllningsfest! Why?  Blessed with leadership and know-how gifts, he played the greatest role in organizing and establishing this wonderful Swedish American event of 1941, so-unique-only-to-Lindsborg, that it continues today biennially.

​"It was during the Coronado season in 1941 when numerous localities were staging Coronado festivals that the Lindsborg Rotary Club, of which Holwerda was a charter member, envisaged putting on a Coronado celebration on Coronado Heights, the historic hill northwest of Lindsborg. Holwerda suggested, instead, a fall festival featuring Swedish traditions and folklore. The idea caught fire and they promptly appointed him president and organizer of the festival, which continues to the present day as Svensk Hyllningsfest, honoring the pioneers." 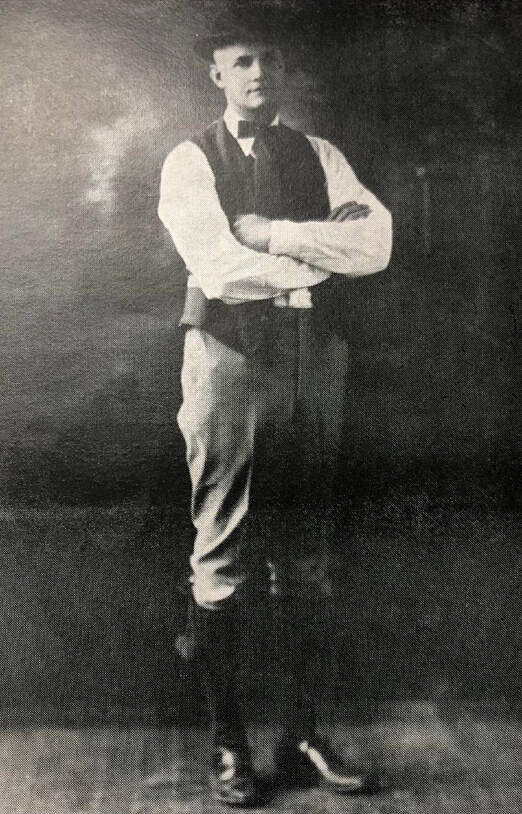 ​- ​Dr. Holwerda's Account -
found in the October 23, 1941, edition of the Lindsborg, News-Record **
​  "The Festival effort was planned, developed, and built entirely upon a premise of solid local support, assistance and support of our neighbors.  The response from all sources was in terms of generous participation.  It's to such support we owe our success." **
*
The Swedish Club (crafts club) of Lindsborg pose in their first Svensk Hyllningsfest costumes in October, 1941
Source:  The October 1976 "Why Lindsborg?" by Elizabeth Jaderborg. 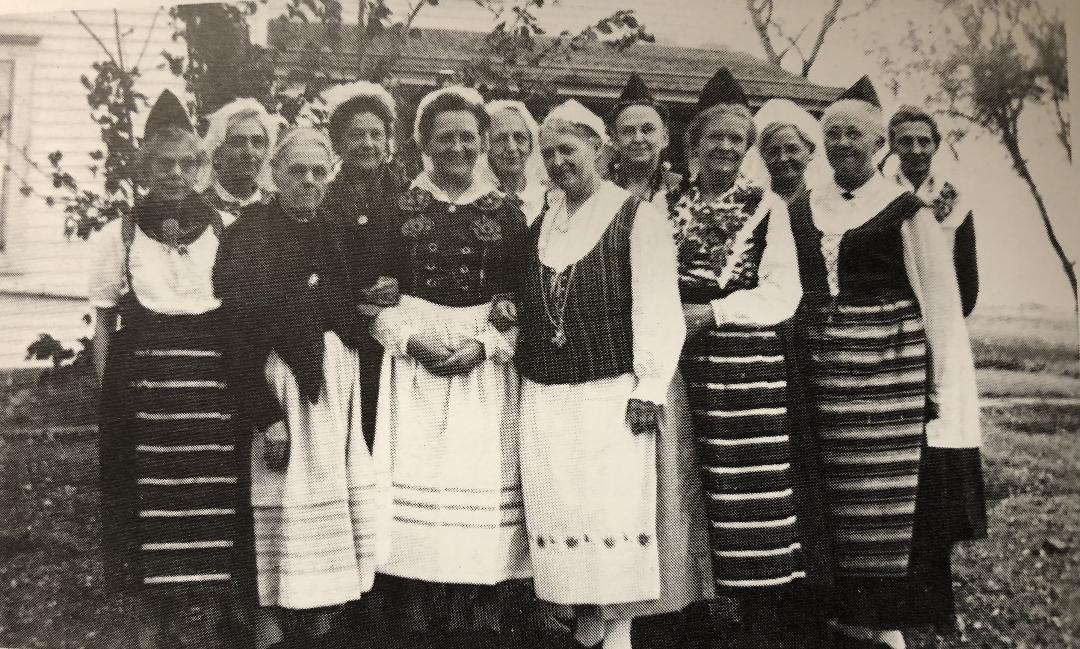 The account below is by Mrs. Elizabeth Jaderborg from her October 1976 "Why Lindsborg?" /\ /\
​- The Swedish Festival -
[The Svensk Hyllningsfest]
Pages 58-59
​
There had been other festivals -- May fest, mid-summer celebrations, special presentations in the early days by G. N. Malm, Andrew Monson and company in costume, and of course, the annual Messiah Week festivals. There had been the Coronado Festival.

But for the fall of 1941, Lindsborg wanted something a bit different. Perhaps it was about time to honor the pioneers who had come to the Smoky Valley in the late 1860s to set up homes where there was nothing but grassland with buffalos, an occasional cottonwood grove and the Smoky Hill River.

The suggestion for a festival patterned after the Tulip Festival at Holland, Michigan, was suggested by Dr. William Holwerda. The idea gained favor, and quickly and quite naturally developed into a strictly Swedish festival.

Meetings were held at which all of the many clubs of Lindsborg were represented. A prize was offered for the best name presented for the new festival. Mr. E. P. Leander, a pioneer, suggested the name “Svensk Hyllningsfest"  (Swedish Honoring Festival).  It was immediately adopted.

Now, quite quickly and quite naturally, the people turn to Dr. Holwerda for leadership in the matter. He was a physician and surgeon who had come to Lindsborg in 1931 at the age of 30. As he administered his medical know how to his older patients, they administered their special “know how" to him. As the first years of his practice grew into a decade, he saw these patients, many of them survivors of the first wave of emigrants, grow tired from the strain of their early pioneer life and their back-breaking labors. He and a number of other Lindsborg people of the younger generation began to realize that there was very little time left for most of these wonderful old people.

The first Svensk Hyllningsfest, on October 17, 18, 19, 1941, was very much as it has continued to be. The Hyllningsfest committee set the tradition of keeping the atmosphere non-commercial, authentic and a benefit to the community and to the College. It was Dr. Holwerda who encouraged the committee to use its profits towards activities for the young people.

The emphasis is still on the Swedish influence which has dominated the community and made possible its rich heritage. All citizens are encouraged to wear Swedish costumes whether their ancestry is Swedish or not. Most do. From the first, the festival has included a worship service and two days of Swedish dancing, folk songs, Swedish band music and special programs offered by the community and the College. The women of the community prepare the food in their homes for the public smorgasbord, giving the feast a very special and authentic flavor. Arts and crafts native to the area are on exhibit and for sale. Most popular, it seems, is the parade with its many floats on a Swedish accent.  There are always plenty of school bands. The Lindsborg Junior High Band dresses in Swedish costumes and leads the parade with the Swedish National Anthem (behind the American Legion color-guard, of course).  Swedish and American flags line the street.

Noted persons and official dignitaries are usually present representing the state, local, and Swedish governments. Sometimes a special event will take place. In 1963, for instance, the Vasa Medal was awarded to Charles Pelham Greenough, III, by Consul Folke Persson.

​Through its Svensk Hyllningsfest, Lindsborg has been drawn into a deeper understanding with its past and a more meaningful relationship with modern Sweden and friends and relatives in the old "Fatherland."

​* This section has been shared with the Elizabeth Jaderborg Family for approval - pending.
*
- ​Dr. Holwerda's 1954 Hyllningsfest Film -
​Produced for YouTube on April 20, 2011, by the late Chris Abercrombie, former President of the Smoky Valley Historical Association.
In Chris Abercrombie's own words:
"A look at the 1954 Hyllningsfest. It took some doing to come up with this film but I finally located it at the Old Mill Museum, along with 3 other films from 1953, 1952, and the first Hyllnings Fest (as they called it then). All 4 films are in color, but there is no sound. At the end of this film notice the shots of Bethany and Messiah Churches and of campus, including Old Main!
​
​"Dr. Holwerda was the founder of Hyllningsfest, attended the births of hundreds of Lindsborg babies for over 30 years. The Svensk Hyllningsfest committee paid for the preservation of these films and their transfer to the digital medium."
*
- ​Hyllningsfest in the 1960s & 1970s -
click on images
found in
​Mrs. Jaderborg's books 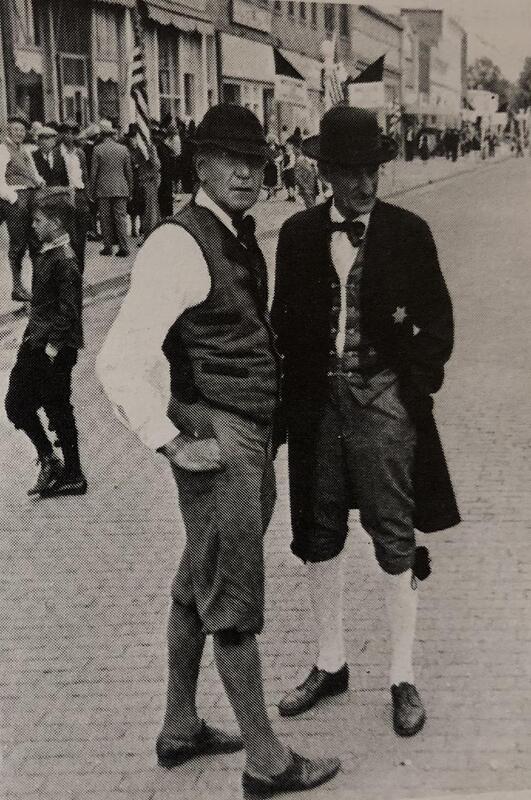 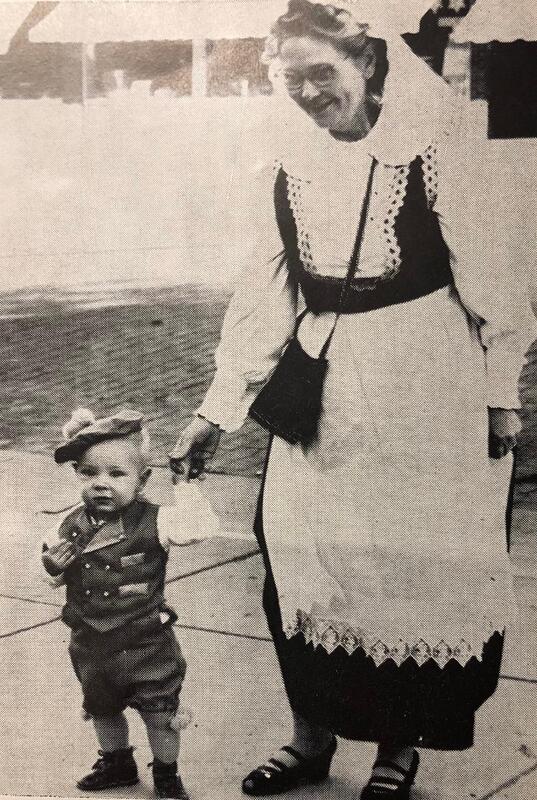 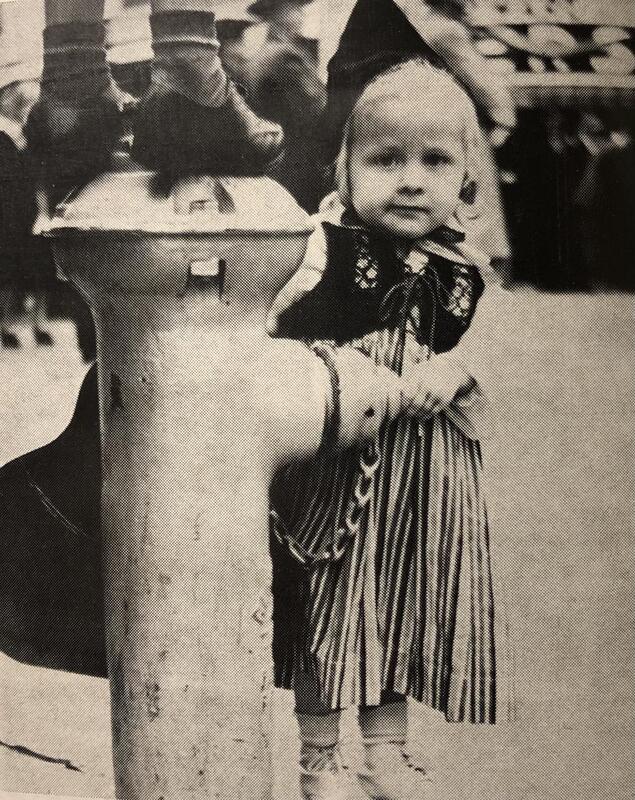 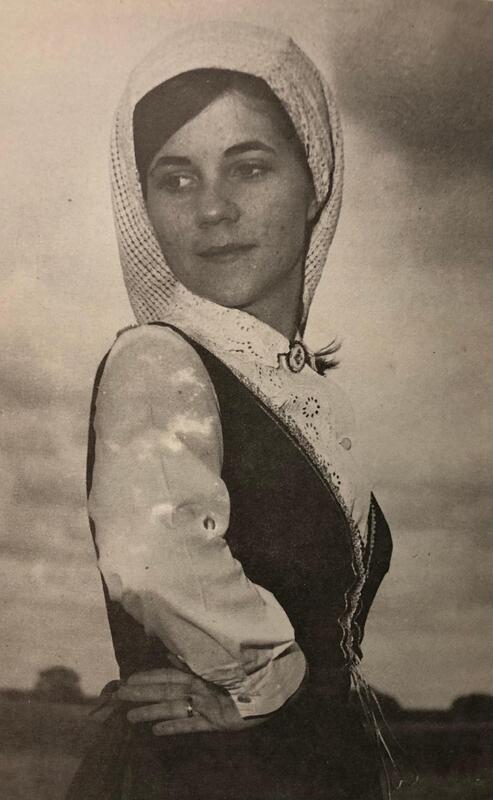 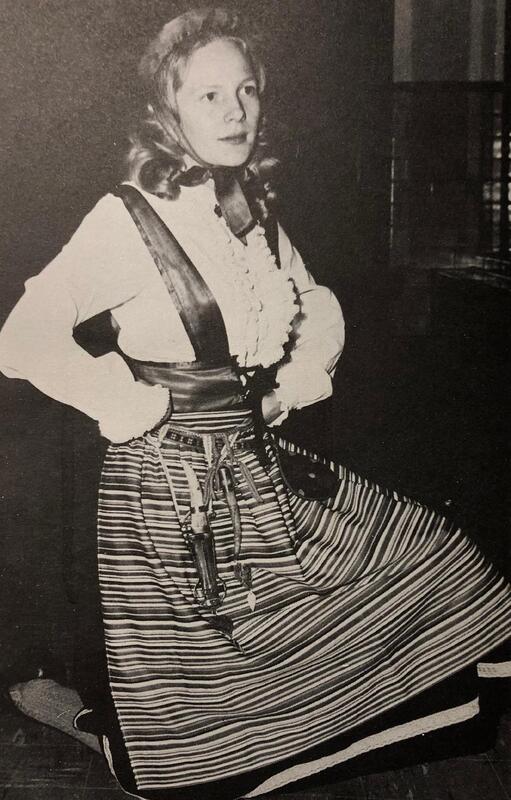 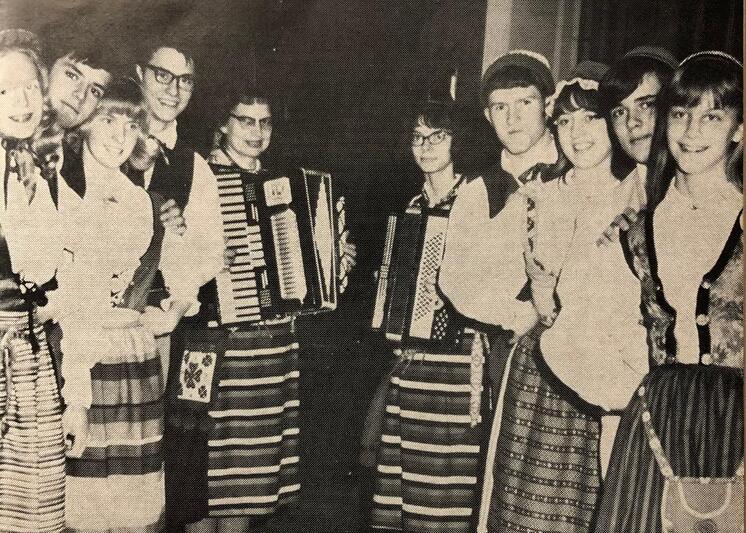 ​The Lindsborg Swedish Folk Dancers of high school students and the other dancing groups composed of children and adults continue to make the festival!!  In 1967 the Lindsborg Swedish Folk Dancers first became international ambassador with their trip to in Montreal, Canada, for EXPO '67.  Before the pandemic years they would perform around the United States and every four years perform around Sweden.

For more on this group, go HERE to Their 1964, "Lindsborg Swedish Folk Dancers" founded by Mrs. Jaderborg ~ An account by Mr. Chris Abercrombie.
​
​SOURCES:
*   This quote is from Dr. Leon Lungstrom's 1990 book, "History of Natural Science and Mathematics at Bethany College, Lindsborg, Kansas.  It is         found on page 221, 1st paragraph.  Thirteen pages, 213-226, are devoted to this medical physician Dutchman Dr. William Holwerda.  These two         gentlemen were colleagues and friends at Bethany College.  On January 31, 2016, permission was granted by Mrs. Leon (Linda) Lungstrom to           share her husband's book in SWEDES due to the important biographies it has on early college Swedish professors, on Bethany College history,       on the only recorded Bethany College Museum history, and further information on the buildings of Old Main and the Nelson Science Hall                    including their blue prints.
**   From the City of Lindsborg video:  "Hyllningsfest History" video, scroll tot 4.43.
/\ /\  October 1976 "Why Lindsborg?" by Elizabeth Jaderborg:   "Permission granted to use material if credit is included.
*    *    *
"Let Us Remember Them"
*     *     *
Swedes: TheWayTheyWere
~ restoring lost local histories ~
reconnecting past to present
*     *     *
All color photography throughout Swedes: The Way They Were is by Fran Cochran unless otherwise indicated.
Copyright © since October 8, 2015 to Current Year
as indicated on main menu sections of
www.swedesthewaytheywere.org.  All rights reserved.