Scientist Emil O. Deere
(Deere & Lydia's Bethany -- Lydia's Photography, 1906 - 1925)
​
- To remember this Swedish American "Bethany College Building" is to remember the "Bethany Family" of its era. -
​ Dr. Rev. Carl A. Swensson to the Bethany College Board of Trustees in May 1895: "Please let me try it.  I pray you!"
​With resounding results renown opera stars and classical instrumentalists from Europe and New York City put
Lindsborg on their circuits to perform the sacred music.
--  Dr. Emory Lindquist's Bethany in Kansas
​
Bethany College "Messiah Auditorium" / "Ling Auditorium" / "Ling Gymnasium"
1895 - 1946
The Topeka Capital described this octagonal-framed auditorium seating 4,000 as “The finest of Kansas auditoriums!”   Located near the railroad tracks, it was built in 1895 primarily for Swensson's Messiah performances during Holy Easter Week, which drew crowds of thousands of loyal patrons coming by special trains for this yearly event.

​The Ladies Home Journal in 1900 ran a story entitled, “Singing the Messiah on the Plains.” Records indicate in 1904 that twenty-five (25) excursion trains loaded with loyal Messiah patrons, from all over the State of Kansas and beyond, were dropped off near the auditorium for this event. Renown opera stars and classical instrumentalists from Europe and New York City put Lindsborg on their circuits to perform the sacred music of Handel and Bach. In this particular era, the Lindsborg Messiah at Bethany was noted as “no other like it in the country!”
,
The Auditorium also served as a very fine gymnasium with facilities for classes in physical education.  Thus, the Messiah Auditorium was also known as the Ling Auditorium or Ling Gymnasium to honor the Swedish gymnastics leader, Henrik Ling.   In 1929, when the building of Presser Hall was finished, it became the new home for the Messiah performances.
​- Taken from Old Main's 5th floor Chemistry Laboratory side window, facing east -
Lydia Deere's O. M. 5th floor office, room 12, was on the west side of the stairs, facing south and College Street. 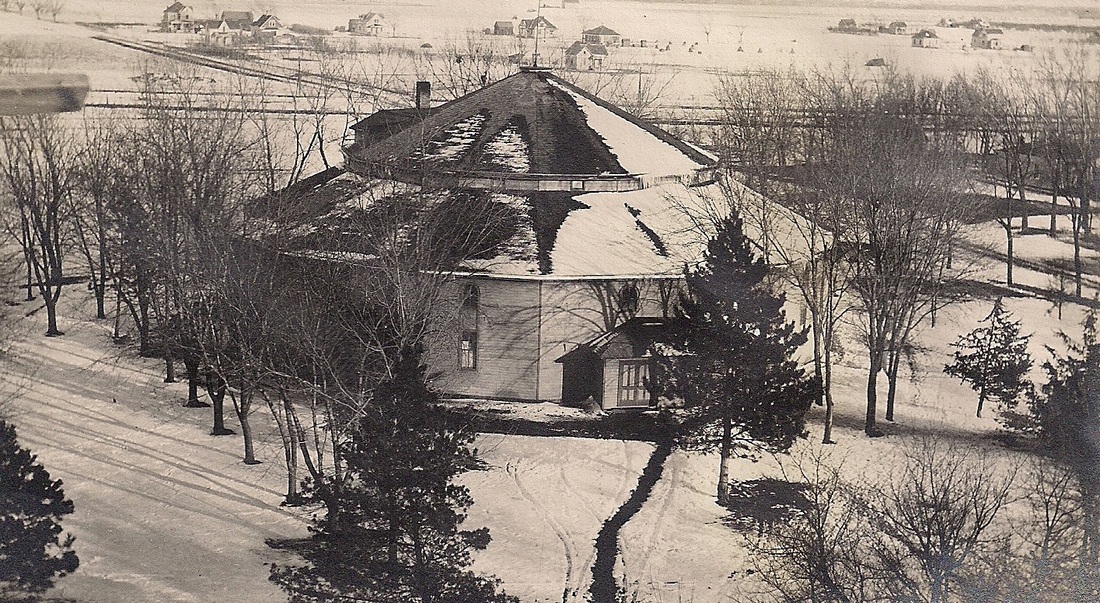 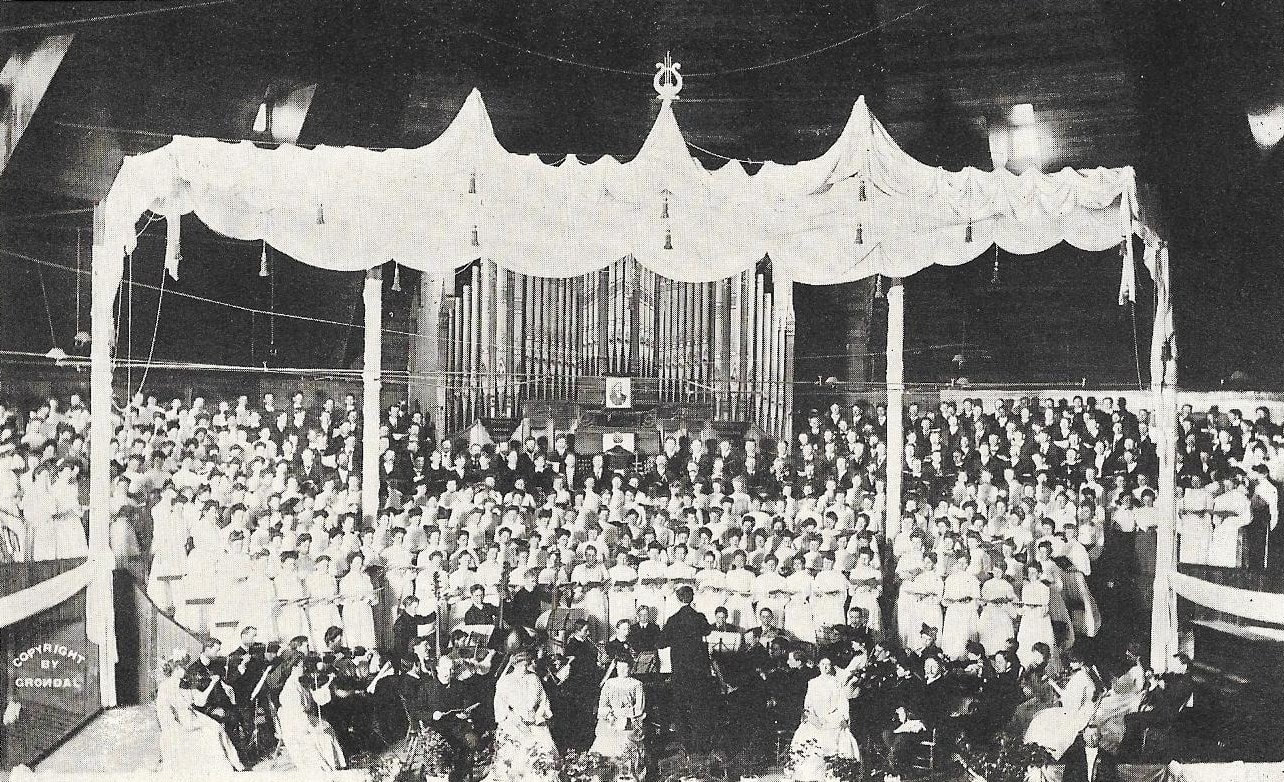 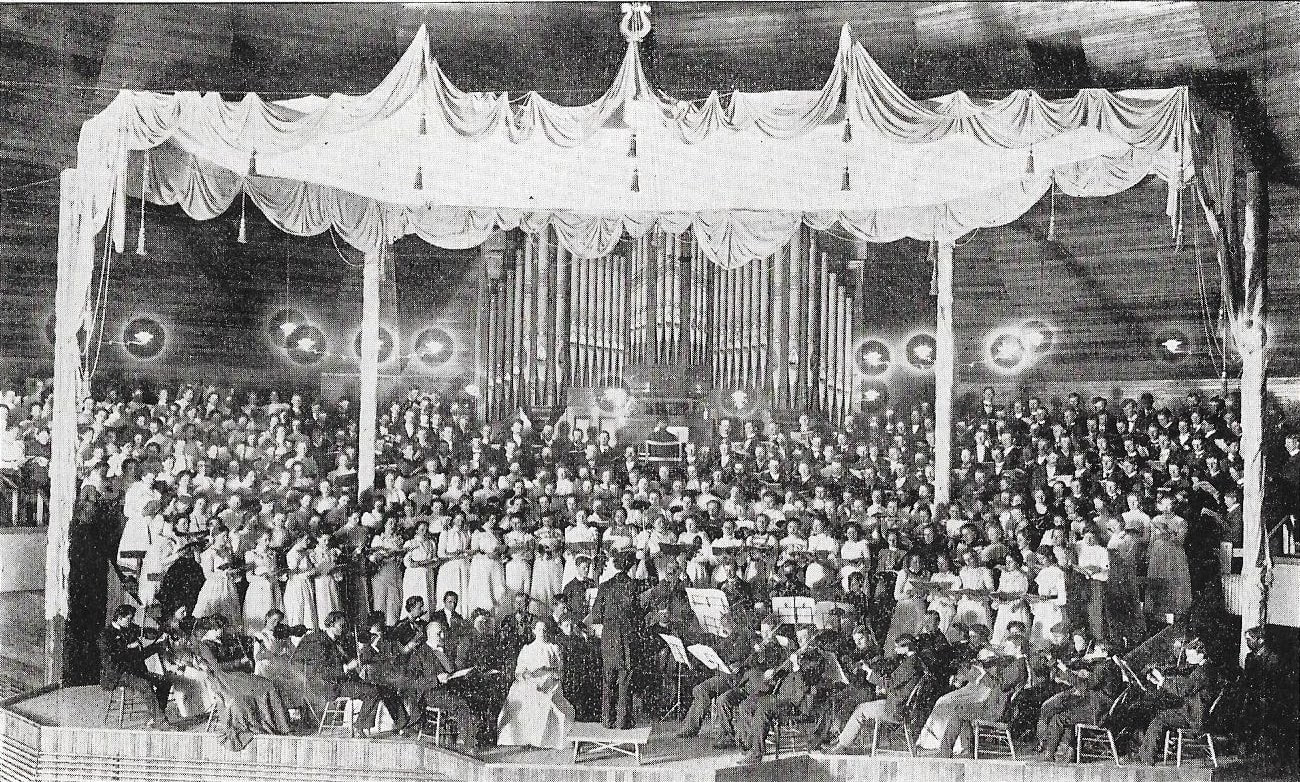 Source: 1902 Forget-Me-Not Bethany College Annual
- 1900 and 1904 -
The "Messiah" Auditorium would also host President Theodore Roosevelt in 1900 and 1904
and it would be the venue for the saddest event in Lindsborg's history --
the funeral of Bethany College founder and president
Rev. Dr. Carl Arron Swensson's on February 23, 1904
as shown below

"A dramatic example of Carl Swensson's optimism and faith in the midst of critical financial problems is evident in the plans which resulted in the construction of the "Messiah" auditorium later known as Ling Gymnasium.  In May, 1895, Swensson had requested permission from the board of directors to construct a large auditorium.  Greater attendance at the "Messiah" festival and at other public functions would generate additional funds for current expenses.  Fine facilities would be provided for classes in physical education.  In a final appeal to the board, written in long-hand, on the formal typewritten letter, were these words:
' Please let me try it, I pray you. '
"The minutes of the meeting of the board of directors in July, 1895, recorded receipt of a petition from the Ling Association, a local organization of Bethany boosters, for authorization to construct an auditorium on the campus.  The response of the board was as follows:
'The board will not deny a place for the erection of the auditorium, but the board as such
will not take upon itself any responsibility, financially or in any other way for this building.'
"A site on the campus was leased to the Ling Association.  Swensson proceeded to the work of construction, having received a promise from Colonel C. A. Smith, a Minneapolis lumber baron and philanthropist, to provide essential lumber for the structure.  The Ling Association raised a modest amount of funds and provided extensive free labor. 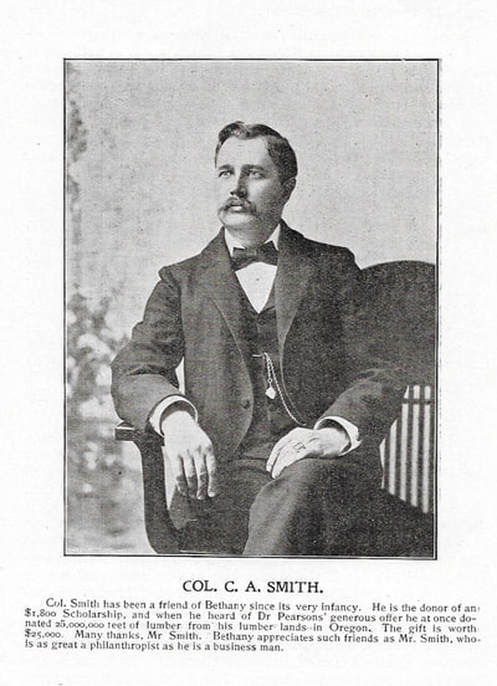 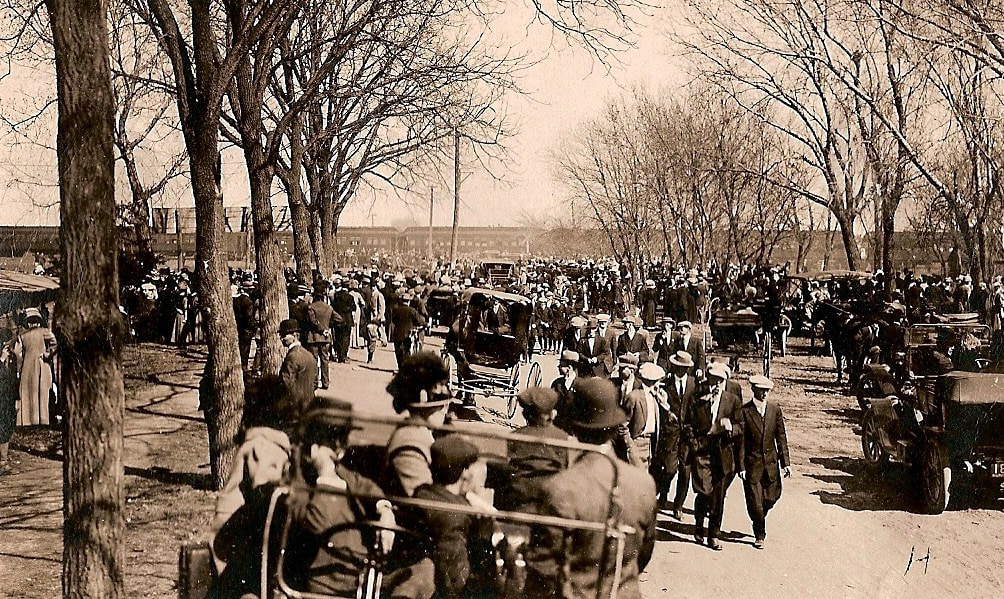 Source: May not be Lydia's photograph.
- Nina and her friends at the Lindsborg railroad depot during the Messiah Festival of Holy Easter Week - 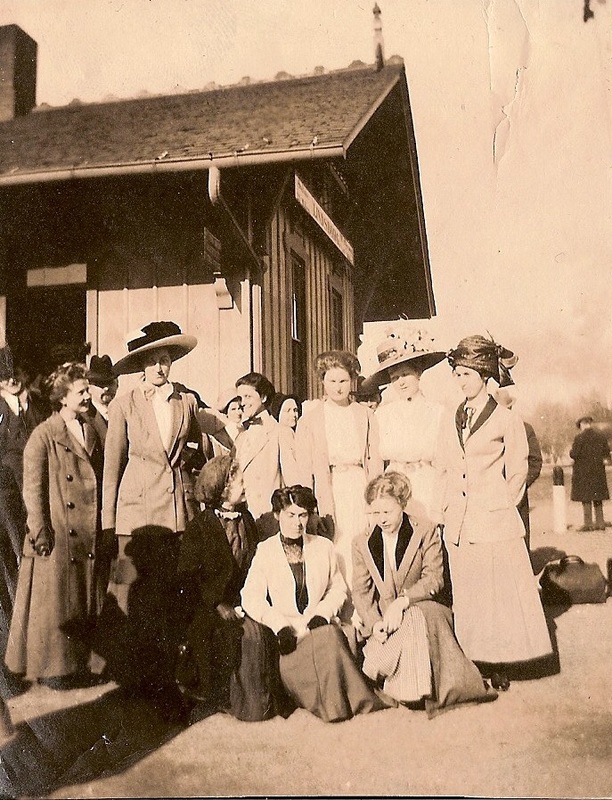 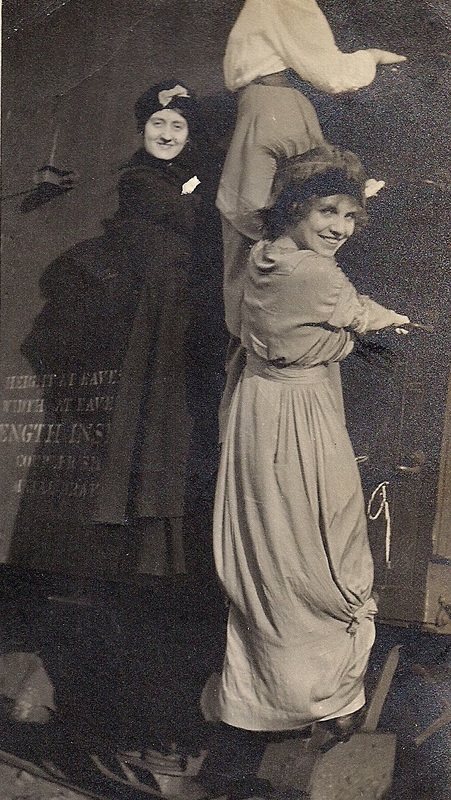 *   *   *
To remember the "Bethany College Buildings" that are gone is to remember the "Bethany Family" of their era.
So let us remember them!
*   *   *
Go HERE for the next Bethany College Building:  Swedish Pavilion
*   *   *
Swedes: TheWayTheyWere
~ restoring lost local histories ~
reconnecting past to present
*     *     *
All color photography throughout Swedes: The Way They Were is by Fran Cochran unless otherwise indicated.
Copyright © since October 8, 2015 to Current Year
as indicated on main menu sections of
www.swedesthewaytheywere.org.  All rights reserved.